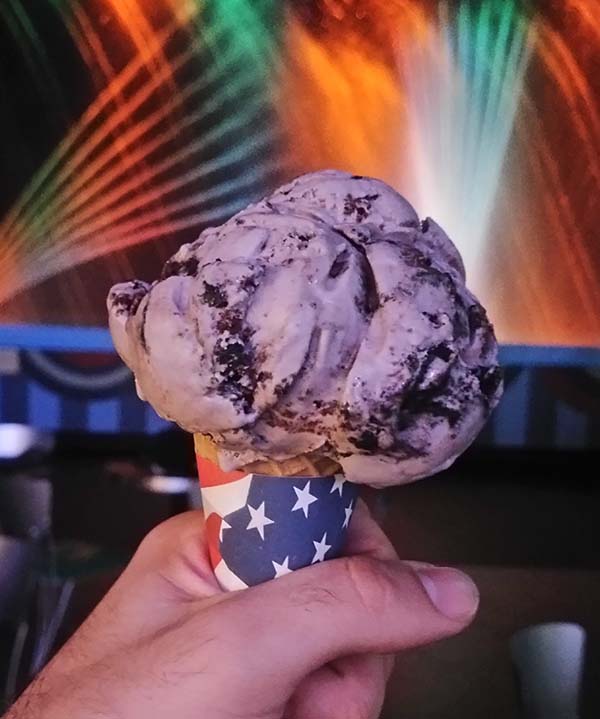 Denoted by the giant ice cream sundae as their storefront, you’ll find Richardson’s near inside a random mall in Reading, near the indoor amusement playground and the musical fountain. Richardson’s has a couple of locations around the New England area, but due to the novelty sundae shop appearance, I was reminded of the Banana Stand from Arrested Development, and decided I needed to go here.

With a large assortment of standard and safe flavors, Richardson’s doesn’t color outside the lines too much. That said, I did see a rather mysterious flavor I wanted to try; the Phantom Berry. It struck me as curious considering many of the flavors were just self explanatory ingredients like: Coffee oreo, cookie dough, etc. So because this flavor seemed different, it was worth the try.

Would this ice cream somehow remind me Phantom Ganon from the Legend of Zelda series? Or will there be a phantom opera approaching?

So we’re looking at an epic black raspberry ice cream with a cookie crunch swirl and fudge brownie pieces. What makes it epic you ask? Well imagine tasting fudge and cookies in a creamy blackberry base as water surges into the sky; all while music plays in the background like some mix between fantasia and Old Faithful geyser at Yellowstone National park. Is that epic enough for you?

The water show really does improve the taste of the ice cream. I was mesmerized by the musical scores and dancing droplets raining down from the water streams in a way that was almost hypnotic. This almost caused me to forget about tasting the ice cream as the senses of sight, sound, and taste began to blend into one in my concious.

The start of this ice cream melody begins with a wonderful woodwind of blackberries. It’s light, playful, and flows up and down like running though scales on a clarinet. Then before too long, the brash brass and bass of crashing cookie taste comes forth in a cresendo. It’s initially still overpowered by the blackberry, but as time goes on, the cookie begins to overpower the blackberry. Suddenly, the blackberry disappears into the night like a phantom of this orchestra opera, and all thats left is a colorful purple cookies and cream.

I was surprised by this transition, and would have loved for the blackberry to continue, but its time in this performance had come to an end. And with that decresendo in fruity flavor, it just so happened that my ice cream cone had come to an end as well.

It was good, but the musical watershow made it spectacular. And while I wasn’t intoxicated, this would probably be phenomenal while under the influence of something. The blackberry comes on stronger in the beginning than towards the end, and ends up becoming replaced with the cookies and fudge taste.

If you want to try Richardson’s Ice Cream the same way I did, you can find them in near Jordan’s Furniture at 50 Walker’s Brook Drive, Reading, MA 01867.

If you want to see what other analogies I’ve compared ice creams to, feel free to peruse at your leisure. You can search different types by category, or simply look at them all on my reviews page. Until next time!