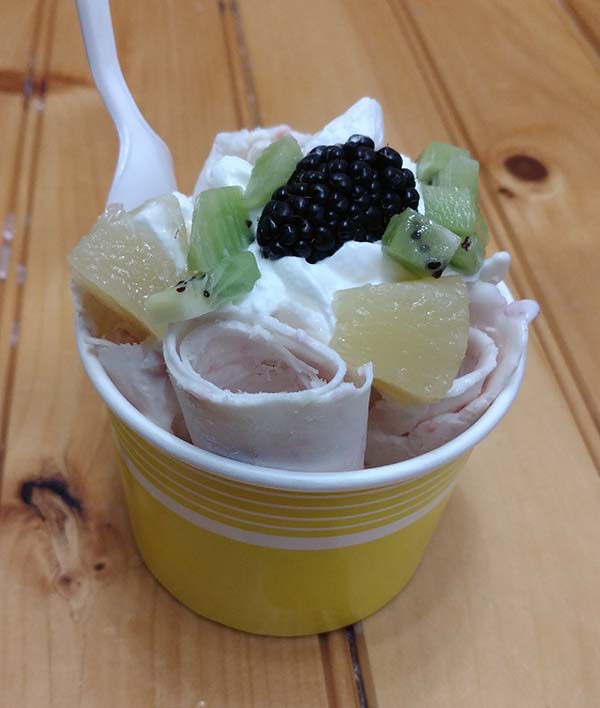 Another rolled ice cream shop, I know. And much like the other shops bearing the similar names, it comes with much of the same style and elements that can be found at any other rolled ice cream establishment. However, since this is the new trend, and everyone thinks theirs is the most amazing, I’m mildly inclined to try them out, just in case one of those people is right.

15 Below is kind of hidden away in between two larger establishments in the walkable “downtown” of Ithaca’s college town. So unless you’re careful to look for it, there’s a decent chance you’ll miss it.

The entire idea of Strawberry Fields is a beautiful assortment of fruits that compliment and accent the strawberry base beneath. It’s supposed to be a celebration of summer and slightly more exotic fruits that all play well together like kids on a playground. All different, but somehow the same. But like any time a child is playing, there’s a potential for tears too. Unfortunately this was almost the case with Strawberry Fields.

Here’s how this playtime went wrong.

There were two flaws that turned fun time on the playground into boo-boos and water works a flowing.

First, canned fruit. The pineapples were canned, and tasted as such. It may not seem like a big deal, but in a quest for the best, it something that can definitely hold a place back. The canned pineapple can sometimes feel rubbery, and the forced sweetness sometimes is a little off putting.

If I had to equate this back to my playground analogy, the pineapple here is like the one weird kid in a group. Maybe he’s new in town, or maybe he just tries too hard, but either way, no one else in the group really likes him because of his supposed “fakeness” and regardless of whether or not the “fakeness” is founded, it does take away from the overall fun of play time.

Secondly, while the garnished toppings are beautifully presented atop the ice cream rolls, they can’t be conserved or spread around well. You’ll get one or two intense pineapple bites, one intense blackberry bite, and then those flavors are gone forever from your palate. Poof! At least with the kiwi, you can mix it up and balance the creation more. But for the most part, the additions that make the Strawberry Fields ice cream creation interesting go away in the first 30 seconds, and leave you with nothing but strawberry ice cream; and while there’s nothing wrong with just strawberry, I wanted more, so the discrepancy between expectations and reality kind to take the gusto out of my excitement.

Again, sandbox analogy: Imagine you were strawberry, playing freeze tag in the sandbox, and within 30 seconds of starting, you tackled pineapple and kiwi, sending them to the nurse. Sure there might have been a surge of fun for you as strawberry doing the tackling, but at the end of the day, you’re just playing alone. And playing alone after having your friends go away is way more depressing than just playing alone to begin with.

Ok, so here’s what I did like. A thinner roll that allows for a miraculously light feel and a consistency that is perplexingly creamy. It’s like, how can something so thin have such a soft feel to it? It doesn’t impede my ability to spoon through it, and instead acquiesces to the spoons shape, falling into order in the form of a perfect bite.

The strawberry taste was fairly average, and almost tasted like most other basic strawberries you can get from a local grocery store. But that texture?? That was some next level stuff that was almost enough to make up for the shortcomings noted above.

Also, if I need to relate the texture back to the playground metaphor, this texture is like your imaginary friend. They don’t have any ambitions of their own, are all support, and have an imagination that is on par with your own. It’s almost baffling how well they are able to play with you, and then you remember they’re imaginary. Still, even if they aren’t physically in the real world, their friendship can create real emotions, and at the end of the day, that’s what’s important about playing as a child. Ensuring fun and happiness.

Ok, so it was really just the one major strength.

As you can tell, it’s a bit of a mixed bag here. I really want to like them because of the super thin ice cream rolls. It really does help with the spooning factor, and somehow brings the whole thing together. On the other hand, the flavor profile wasn’t everything I’d hope it lived up to reading the ingredients on the menu. It’s just a basic toned down strawberry cream, and there are a few fruity flavor friends that fall away in less than a flipping minute, so I don’t even think their flavor interactions are worth recounting.

In conclusion, while I still was able to have a fun time “playing on the playground,” it might’ve been even more fun if there were more people to play with. Does that even make sense? Well whatever.

If you appreciated that description of the rolled ice cream creation, read another review on my royal reviews page. Here I host a multitude of random descriptions for ice creams, and hopefully you’ll enjoy those too!