One of Austin’s Awesome Ice Creams 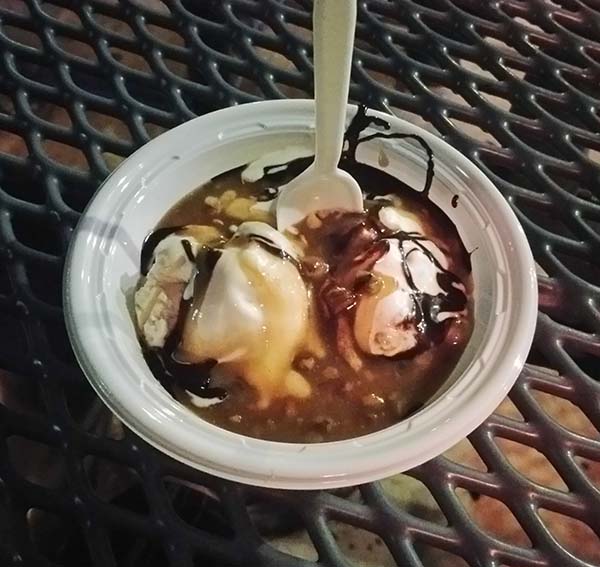 Amy’s Ice Creams is one of those places where everyone comes here to have a good time, and whether it’s night or day, the employees, customers, and ambiance outside is filled with fun.

Truthfully, it kind of looks like melting ice cream in a vomit stew. Then again, if we just judged ice cream based on appearances, then the best ice cream would obviously be the ridiculously sweet cotton candy ice cream burritos, Thai rolled ice creams, or some other vibrant cream that’s aesthetically pleasing. That is to say, not all good looking ice cream is bad- in fact, many are still delicious. But I would be remiss if I did not point out the flaw in judging a scoop by its addition or lack thereof for vomit looking toppings.

Anyways, the Turtle (or tortuga as my Duolingo account tells me) is a Mexican vanilla ice cream, topped with hot fudge and a doused in a pecan praline sauce. Altogether, it is a beautiful swampy mess that is an absolute delight to dine upon. There’s such a subtle heat that comes after the vanilla, in a way that is almost like cinnamon from a red hot. Then copious amounts of hot fudge and praline sauce drown the ice cream. The pralines provide an strong buttery/nutty flavor and the hot fudge simultaneously sweetens and deepens the flavor. In the end it mixes into one amazing vanilla, cinnamon, buttery, nutty, chocolaty mess, but due to the intense helpings of the praline sauce, the buttery taste takes the limelight. It’s now the ice cream that’s providing the soft vanilla undertones along with the touch of cinnamon spice.  Like the mammoths at the Brea tar pits, it looks like this turtle treat is drowning in the sticky sauce that encapsulates it- and really, the tar is more of a star than the animals who are in them.

The real greatness of this ice cream though is its ability to bring out the best in people. Upon tasting this ice cream, an indescribable happiness emerged through the frames as I began taking bites of this turtle soup monster.

As you can see, my train of thought as I tackled the turtle went as followed:

By picture four, me and my friends were cracking jokes left and right, and in the midst of all that, it hits me. This is what eating ice cream is all about. Sharing a moment of happiness with those around you, and it’s accentuated and made better by the friends who accompany you.

I truly enjoyed this ice cream. It’s looks terrible, but tastes delicious. What’s more is that this flavor offered a brief moment of unbridled joy and happiness into the life of what some people would call a cynical person.

If you’re interested in trying this ice cream, Amy’s can be found in both Houston and Austin, with multiple locations in each. The one I ate at is located at: 1301 S Congress Ave, Austin, TX 78704.

If you liked the fun ice cream antics described in the post above, please make it over to my Royal Reviews page, and see the latest ice cream reviews I’ve written. Until next time!