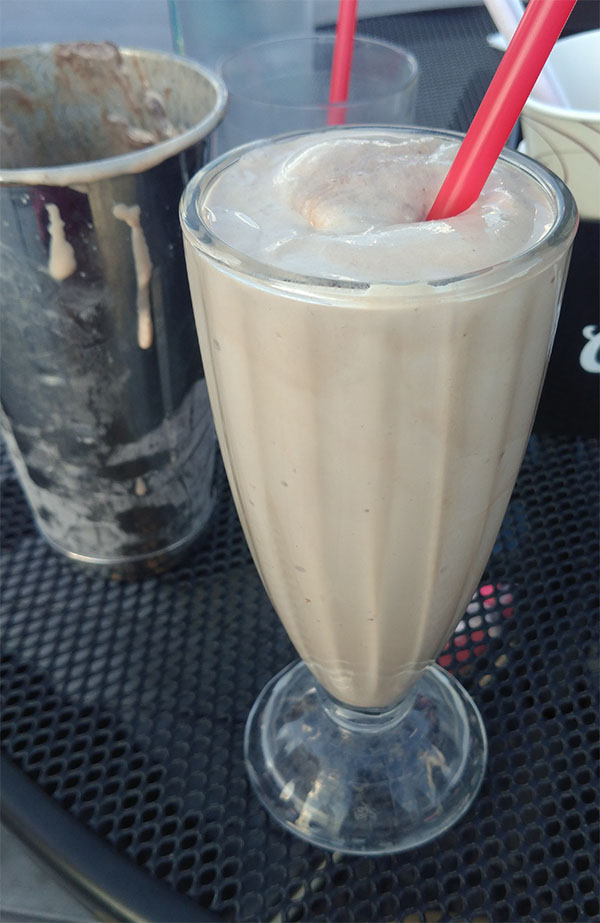 Yes, milkshakes and malts are a part of the ice cream family. Though while not as complex, they certainly have their place in the kingdom, and I would be remiss if I didn’t review them from time to time. And for those thinking I might be a little harsh in my analysis of milk shake simplicty, let me just go on the record stating that they aren’t all like Holsteins Shakes and Buns. Many are closer to the Pulp Fiction version. Milk and ice cream, no bourbon. Annie’s is no exception. A simple ice cream base, add milk, and perhaps one topping or mix-in.

Not entirely sure why, but staring at the menu, I was drawn to and vibing the banana chocolate milkshake.

Do you know why there’ always money in the banana stand (arrested development reference)? It’s because these two items together are a huge fricken success! The number of times that part of the business was destroyed and then rebuilt just goes to show the profitability of that type of dessert item.

The banana chocolate flavor here is no different. We’re looking at a vanilla base, that has full on bananas chooped up, and then had decent amounts of chocoloate sauce added to it. Then the whole thing is swirled up and blended together into something that can probably be the equivilant of a $5 shake (despite the fact these are decidedly more expensive than a single Abe Lincoln).

The banana is fresh, and of course is accented well by the chocolate, but isn’t overpowered. With a strong addition like chocolate, you almost expect the chocolate to take over, but the banana persists. The chunks and lumps of the blended banana pull through, so there is an amazing balance between the two flavors of banana and chocolate.

What really sets this type of shake apart is the texture. It’s milky and chunky, but in a way that somehow works. There will certainly be parts that are easier to consume than others, but going through those super thick portions is just reminiscent of the shakes down at the local soda fountain from the days of old. It’s more nostaligic than anything, but dammit if this texture doesn’t make me reminisce like a grandpa clinging to the “good old days.”

The flavor is a layup. It’s easy peasy yummy, and the texture plays to the heart strings of the types of shakes our grandparents would go on about. Is it truly phenomenal or ground-breaking? Not unless you’ve been living under a rock and consider the use of banana ground-breaking. But overall it’s still very good.