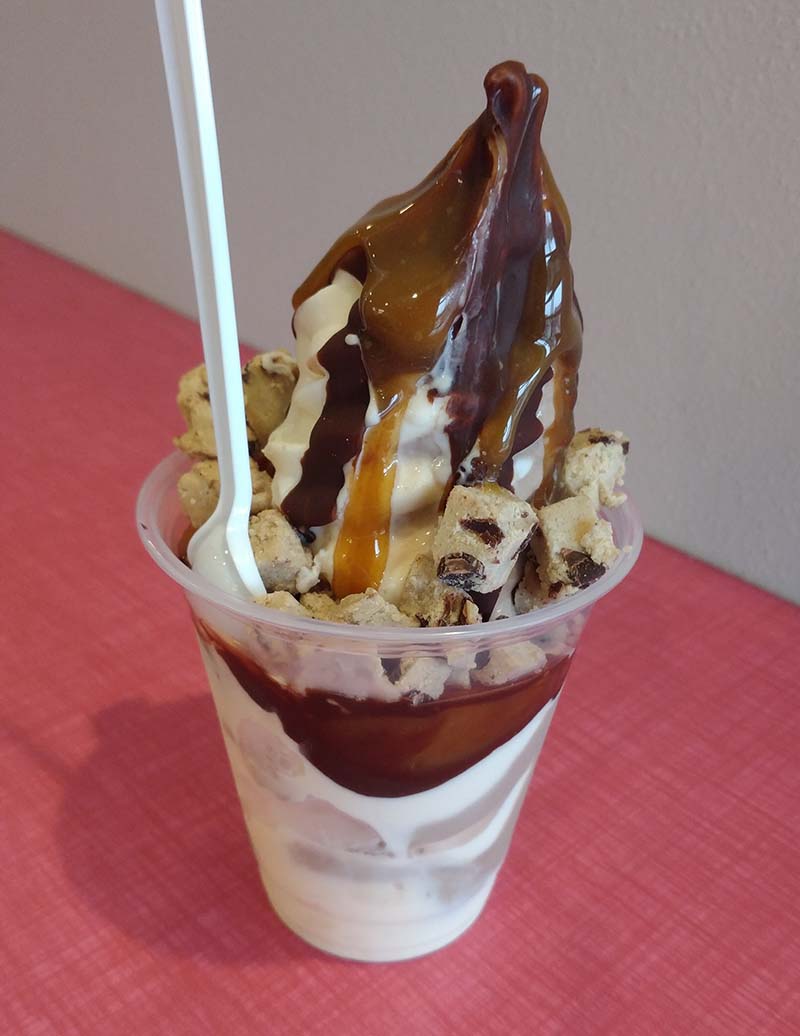 So before I even go into the ice cream, let me spend a few seconds gushing about the shop that is Armadillo’s Ice Cream. You know how I say that ice cream taste can totally be influenced by things like staff, company, even weather? Well despite the fact that I was alone on a rainy day in South Dakota eating ice cream, the kind Midwestern hospitality that was shown to me by the staff at Armadillo’s made the ice cream I experienced taste exponentially better.

For starters, Armadillo’s is one of those shops that you can tell loves the town it inhabits just as much as the inhabitants love them. They’re only open around 8 months out of the year, but during those times, and especially during the summer, scores of people line up around the building just to try some of their awesome soft serve and sherbet creations.

After talking to the owner (Austin) about my ice cream adventure, he even gave me a tour of how his ice cream is made! It was the middle of the day, and he was just like, “Work? Nah, who needs to do that. I’ll give this traveling hobbyist dude a tour of our production facilities and a quick 20 minute lesson on how to crush it in the ice cream game.” Ok, he didn’t say those words exactly, but that’s pretty much the jist of how it went down. Willing to make time for employees and the fans of his work, management here is pretty much that ol’ school small business mindset of take care of your people, and your people will take care of you. Love it.

Lauren’s Landslide is the most popular sundae sold at Armadillo’s among teenage females (or at least that’s what I was told). I kind of imagine a spreadsheet breaking down all sales, and a data analyst notices which ice creams are sold the most among specific demographics, and presented this information to upper management.

So when I was told this oddly specific fact about their best selling creations, I just had to try it.

Far superior to any McDonald’s or Souplantation, this isn’t your mom’s soft serve ice cream. It’s soft, but has the consistency of a really thick yogurt, and looks like it should be in some magazine advertising that perfect soft serve. As you can see, the fudge and caramel are amply spread throughout the creation, not just seated at the top. This is crucial because as you go from the top to the bottom, it’s always the case where you can run out of a specific topping, which could drop the sundae’s delictiblenessicity (definitely not a word, but I’ll make it one) by at least 25%.

Furthermore, the generous boulders of cookie dough lay waste around the base of this ice cream mountain, almost as if they were in some sort of natural disaster involving land just sliding around. I know, an earthquake! Anyways, as for what this means in terms of topping to ice cream ratio, I would recommend this tactic. Spoon a boulder of cookie dough first and then continue the scoop in trying to get a bit of soft serve and fudge or caramel. The gobs are small enough to fit one and some ice cream in a spoonful- i.e. the perfect scooping size. Take one of those cookie dough morsels every three-maybe four bites, and you should be rockin’ in terms of finding the perfect balance of cookies to ice cream so that it lasts throughout the entire creation.

Tell Me What You Think!

Did you like the post? Let me know! Make it over to my contact page, and send me a message. I’d love to hear any feedback- happy, glowing, adoring, whatever! Or, if you want to read any other reviews, make you way over royal reviews page to see what other judgments I bequeath unto other ice cream shops/flavors.