Ben & Jerry – Save Our Swirled

A Pint for Our Precious Planet 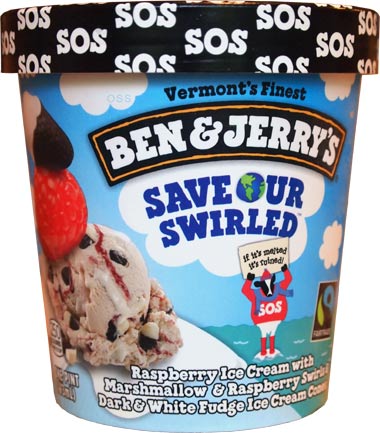 Time for a little throwback this Thursday as I talk about a limited time batch from the always appreciated Ben & Jerry’s.

This flavor was Save Our Swirled.

Save Our Swirled Profile

Inside this creation, we’re looking at delicious swirls of marshmallow fluff inside a raspberry ice cream in a way that is reminiscent of a long forgotten cream saver candy. These two are then accented nicely with bits of light and dark fudge, which creates the sensuously seductive taste in a way that only chocolate/marshmallow covered fruit can. Remember the last time you had chocolate or marshmallow covered anything? I’m willing to bet it was pretty damn amazing. And you see, this is when Ben & Jerry are fighting for.

Not to get too political, but I’m kind of going to get political for a second.

If climate change gets out of control, it will negatively affect the environment, and in turn, the ingredients used to make ice cream. This will lead to low quality ice creams; not just from Ben & Jerry’s, but every ice cream maker out there! We can’t let that happen. Regardless of what you may think of Ben & Jerry’s, it’s things like this that are what make them a great company. And honestly, this thoughtfulness raised the ice cream to next frontier of flavor.

You know when you eat something made by a child, and you’re more proud than satisfied with the taste? Well that’s what is was like here. Except the difference was, the taste was actually good too. So this sense of pride compounding on raspberry marshmallow goodness delivers you to a taste of hopeful euphoria.

Back then, I ate this ice cream and a tear rolled down my eye. Because with such hope, I thought once this climate issue was over, the ice cream kingdom would continue to thrive in its continued golden age. And maybe, just maybe, we could then Imagine Whirled Peace… (pun intended).

Save Our Swirled Conclusion

Sadly, since this flavor didn’t save the world and has since been discontinued, I have to rate it as a failure… Totally kidding. This was a flavor where raspberry, marshmallow, and chocolate came together in a way that was appreciated. That said, this was also a flavor whose social impact affected me more than the actual taste. Don’t get me wrong, it was delicious ice cream. But knowing that little by little we can make a difference, it was that feeling raised the flavor profile a whole level higher.

Normally I would recommend a place where you can find this flavor, but since it has been discontinued, that is not quite possible.

P.S. For those of you who were wondering how buying ice cream was going to help save the planet, let me lay it on you. Back in 2015, the UN Paris Climate negotiations were underway. The idea was to have 35 developed nations from around the world pledge to be at 100% renewable energies by 2050. There was information and links on each pint about how to help this cause. There was also links to a petition, as well as places to donate and further programs that would lead to better renewable and sustainable projects. So even though it just seemed like a cool pun and trend to profit off of, Ben & Jerry’s did their part to help push the country, and world, forward.

Read Another Review of a Pint!

Not all of my reviews are flavors directly from ice cream shops! Sometimes I go to a grocery store and eat ice cream by the pint! If you want to read those reviews, read the grocery store pint flavors! It’s the same snarky reviews, 16 oz at a time.