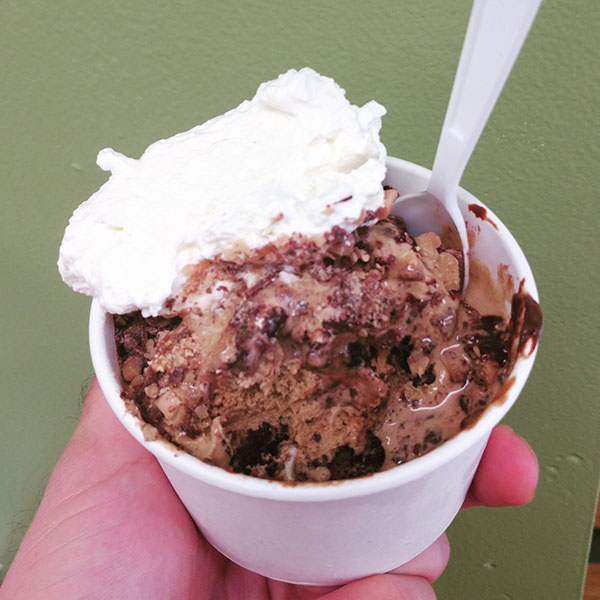 Talking to people from Richmond, if you even mention the concept of ice cream, the locals will cut you off mid sentence to ask if you’ve tried Bev’s.  I had only been in the town maybe 20 minutes before I somehow entered into a conversation about ice cream (this happens to me more often than one might think). And before I could even note that I was on a cross country journey, some random strangers interrupted, “Are you guys talking about Bev’s?”

Just from the blantant brand association at the mere mention of ice cream, I had a feeling I was in for something special. I hadn’t eaten anything yet that day, but chose to completely forgo lunch in lieu of this dessert shop I was slightly stoked to the max to try.

I was tired but also restlessly excited to get some ice cream in my system, and I really wanted to keep this feeling going. That’s why when the scooper suggested the espresso oreo (especially considering it was their most popular flavor), I was all over that shit faster than a retriever grabbing the scraps that fall off the dinner table. And to make things interesting, I decided to go full sundae mode as I was informed that the whipped cream they use is home made. Can I get a hells yes?!?

We’re looking at an espresso oreo base, with fudge, heath bar topping, and some home made whipped cream to qualify this as a sundae.

Chocolate and espresso? One bite of this and my eyes dilate and caffine is instantly coursing through my veins. I will say is that after eating this I was fucking amped! The heath bar is just toffee bits that get stuck in your teeth and help to turn this espresso into some sort of caramel machiato/hot chocolate combo. Despite the additions of Oreo chocolate, fudge, and the outer coating from the heath bar, there was still a surpising amount of espresso taste. It was in no way drowned out by the chocolate (although there was certainly heavy chocolate influences), and the espresso tended to come through more on the backend in the aftertaste.

Was it yummy? Yes. Was the yumminess in part due to the fact I was starving? There is most certainly an argument for that. If I was more satiated in my hunger, would the sundae have tasted bad? No. It certain had merits to be delicious regardless of my hunger level. Then why does it feel like there’s going to a change of heart in your opinion of this ice cream? Because nothing is perfect, and Bev’s is in no way impervious to this immutable fact of life.

Some may notice the minimal amount of whipped cream off to the side of this sundae like a unfashionable beret. And yes, it is just as disappointing as the fashion statement. It’s fresh, so it’s thicker than redi-whip and won’t melt as fast. It’s delicious, fluffy and has a texture that makes you instantly crave more. BUT, the quantity is just so small! There is no feasible way to parsel out the cream in order to make it last for even half the sundae! The whipped cream added a necessary lighter contrast to the heaviness of chocolate and espresso tastes, and it less than 2 bites, the whole thing was gone. I know that this isn’t the part I should be focusing on here, but because they’re touted as the local legends of Richmond, it irritated me more than it should have that the scooper skimped on the whipped cream.

It’s a one-two caffine punch of chocolate and espresso. Each part is delicious in it’s own right, and when eaten while hungry, the entire dessert is absolutely invigorating. That said, Bev’s will get some heavy marks against it for the disappointing amount of whipped cream they included. Overall, it’s a good choice for ice cream if in the Richmond area, and pending an apology for the small amount of whipped cream, I’d be happy to go back and visit them again.

Send Me a Message!

If you want to tell what you thought of this review, or if there is any ice cream in the USA that you want me to try and review, let me know! Just shoot me a message on my contact page and I’ll be sure to put it on my list of places to try. I’m not saying that I’ll buy a plane ticket today, but stranger things have happened, so there’s a good chance I’ll get to your recommendation some day.