Next Level Ice Cream Sandwich From a Store 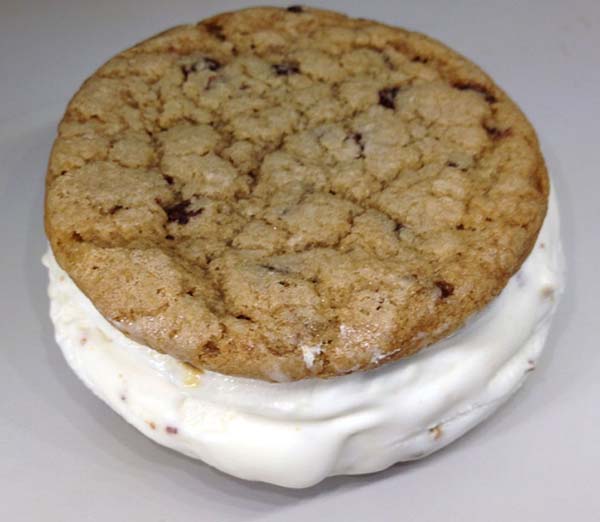 If you’ve never heard of Cool Haus, then I pity you. They are an awesome ice cream company started by two women in Los Angeles less than a decade ago, and now their shops have become a huge success. Furthermore, their products are shipped around the United States to be found in the ice cream isle of many a grocery store.

Cool Haus has a lot of unique and fun ice creams, but where they truly excel is their ice cream sandwiches. Fun ice creams with a good consistency that won’t fall apart during consumption, and cookies that can sometimes be made from cereals. Put them together and you have a recipe for a high falutin fun dessert that makes everybody happy.

The ice cream sandwich I chose to go with today was the Louis Ba-Kahn. With a naming sense that sounds somewhere between Gengis Kahn and Louis Vuitton, I was surprised to find out that Louis Kahn was actually an american architect back in the 30s. And after tasting this carefully constructed dessert, it makes sense that something so finely tuned was named after an architect. So without any further ado…

The brown butter bacon bests blocks of boorish bitter batters blindfolded (in other words, this ice cream kinda crushes the competition). The maple bacon was subtle, but simultaneously sweet and savory. It tastes like how bacon gets when it soaks in the remnant maple syrup from a bacon and pancake breakfast, but largely lighter and creamier. But low and behold it gets better. Not only is there a solid sweet bacon taste, I also sense a slightly smokey element to it as well.

At first, because of the name resemblance, and the fact I purchased you from Whole Foods, I imagined a cream that might be far fancier than the public is ready for, but I will admit, I was very wrong. The ice cream was delicious and not too fancy for an layman to try.

Now I’d like to take a second to talk about the structural soundness of this creation. Many times with ice cream sandwiches, the ice cream might be too soft, or the cookies are too hard, and it causes the ice cream to push out the sides and cause a giant mess. As the whole thing discombobulates in your hands you wonder, “There just has to be a better way.”

Well Cool Haus found this better way. By some source of devilry, the ice cream freezes a little bit harder than if it was freshly scooped in store. As a result, they managed to mitigate the discombobulation effect. Also, with softer cookies, it’s not like trying to bite into a rock (I’m looking at you Nestle Tollhouse Ice Cream Cookie Sandwich). If there is a downside to be found in its construction it would be with the cookies. Because they are slightly softer which allows you to bite into them, this does leave an opening for the cookies to be a little soggy when opening the package. It’s a bit of a trade off between bite-ability and cookies texture, but in the end, I think Cool Haus went in the right direction. It was still delicious and held true. And truthfully, that’s what matters.

Like I noted at the beginning, this ice cream was actually named after famed American architect, Louis Khan. This makes sooo much more sense. Because in order to assemble something this amazing, only an architect with true vision could accomplish a feat like this. Something so simple, yet profoundly elegant and accessible by all.

Love it. The brown butter and candied bacon is put together in a way that is both high class, and down to earth for the common man. The sandwich has good structural integrity but isn’t impossible to break down in your mouth. The two downsides to this ice cream creation would be: first, the cookies can get a little bit soggy while waiting to move off the shelfs. Secondly, even though it’s sold in a grocery store, it’s sold at a price point that’s almost like you’re buying it fresh from the shop. It’s around $5-6 for a single serving, but you know what? I am willing to live with these because everything else- size, complimenting flavors, and overall satisfaction were so high.

If you want to see if Cool Haus is sold near you, you can check out there website’s section: Where to Find Us.

Tell Me About Other Amazing Ice Cream Sandwiches

If you liked my analysis of Cool Haus’ Louis Ba-Kahn Ice Cream Sandwich and want me to try any other favorites you may have, let me know! I’d love to try them. Leave a comment below or reach out to me on my contact page and send me a message. I look forward to tasting your suggestions soon!