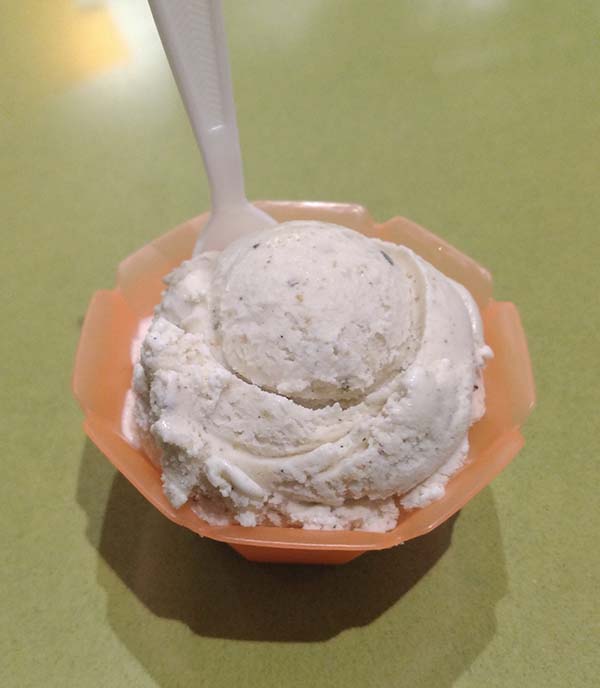 Let’s get right into it and talk about Kulfi. What the hell is Kulfi?

Great question! For those of you who are unaware (much like I was prior to trying this flavor), Kulfi is an Indian dessert that uses cardamom, rosewater, and pistachio flavors to bring about an interesting flavor in ice cream form. In it’s traditional form, it doesn’t use any eggs, and is closer to a frozen ice pop than regular ice cream. It is usually served as an after dinner dessert in Indian culture, and due to the cardamom, it has a medicinal effect similar to ginger. This means it can help with digestion in terms of gas, bloating, heartburn, etc.

Hold it right there. Say what!? This was my second of three ice cream spots on this particular day. You’re damn right I’m looking forward to this flavor curing my bloated ass!

Because this flavor is so unusual, I closed my eyes and really tried to envision what I was tasting here.

So with eyes closed, I pick up my spoon and took a bite. The spoon went right into my mouth, no mistakes. First hurdle- triumph(insert success kid meme here). Now we get to the tasting.

The profile starts with a rose. It was floral, light and fragrant, and while it enveloped my taste buds initially, it retreated almost as quickly as it burst forth. Because as I continued this tasting, the rosewater slowly faded to the background and a new sensation appeared. It was a light spice. I knew it had to be the cardamom. It reminded me almost of a light gingersnap/cinnamon feel, and while this started to overtake the rosewater taste, the rosewater never truly went away. Like a faint whisper, it only was present to accent the cinnamon cardamom taste. The final flavor profile in this ice cream symphony was the pistachio. Finely chopped to the point just before becoming powder, it really acted as the base foundation and was the most apparent when swallowing the spoonful. It wasn’t that intense, but it lingered, and didn’t disappear until the next bite was taken, thus restarting the process over once again- like a chorus of a beautiful melody.

In the end this flavor was like a well choreographed cinematic song and dance from some eastern culture. Like the Hollywood of the east, maybe a B version- I know, B-Hollywood! Anyways, I digress, as the name of this town isn’t important. BOLLYWOOD! So as I was saying, every ingredient in this flavor had its part, and each had its moment in the tongue (so to speak). So good job Cool Moon, and I now respect the flavor known as Kulfi.

For those interested in trying Kulfi ice cream and seeing that sick t-shirt, Cool Moon is located at 1105 NW Johnson St, Portland, OR 97209.

Ready to Try Another Flavor?

If you’re like me, one ice cream is not enough. There is an entire world of ice cream out there, and I’ve barely scratched the surface in tasting and reviewing them all. If you would like to simply dive right in and begin to learn about the other flavor profiles around the country, head over to my royal reviews page to see the latest ice cream flavors I’ve tried!