Vermont Staple of the Dairy World 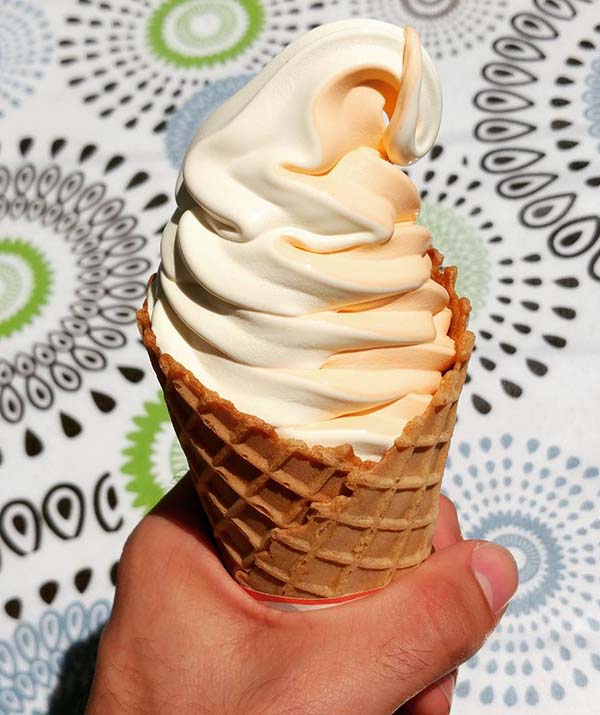 Anyone from Vermont or Western Massachusetts will tell you that the chilled dessert game in New England ain’t about the ice cream, but it’s about creemees. Which is ironic considering one of the most well known ice creams in the world is based in Vermont- Ben & Jerry’s. But I digress.

If you aren’t from the area, you might even be wondering exactly what is a creemee? It’s still within the realm of ice cream, but because of the milkfat content and auxillary ingrediants that go into it, it’s actually classified as a custard. This means it offers an extremely soft and silky texture, with a clean finish. But because of the way it’s served, it’s often mistaken for soft serve, which is an insult to frozen custards. For the laymen, it’s basically a really special type of soft serve ice cream.

The Creemee Stand I visited was along a highway in Willmington, VT, and it featured a wonderful variety and mix of flavors at bvery reasonable prices.

Let’s break this thing down. It’s one flavor, but it’s two flavors, in a single stream flavor. This creemee stand in particular allowed for the mixing and matching of a few different flavors, offering fun combinations like orange and maple or chocolate and maple. As we are in Vermont, maple is a big thing, so most of the mixes have maple in one form or another.

Going into the actual flavor now, the aforementioned maple is blended into a vanilla, and not terribly potent. It’s real Vermont maple syrup, none of that Aunt Jemima shit. So it’s pretty much a sweeter vanilla, with a sugary sweetness that contains and entire forest of maple in every lick.

Then there’s the dreamsicle. It’s a very light citrus tang and zest, and contains the faintest reminisce of orange. It’s so faint, trying to remember it’s taste is like trying to remember a dream just after you woke up from a great snooze. There are certain notes of memories that seemed so real, but after about 10 seconds of concious thought, your brain struggles to put the points together in your memory vault. It certainly puts the dream in dreamsicle.

Together, these two are just insanely sweet with just a note of orange zest. No actual sour component whatsoever, just varying types of sugar in a way that is still welcome in my book. The maple really carries the pair flavor wise, and together they become like a fancy orange zest maple syrup. And this, I can live with.

In terms of consistency, you can practically feel how soft it is just by looking at it (which is supposed to be one of the hallmark staples of a creemee). A softer than soft serve dessert. It’s so creamy, it’s like a… cree… mee. The whole creation struggles to hold it’s structural integrity under the beating sun along the highway on a warm New England summer day. The top almost looks exhausted under the weight of the curling

Super sweet. It’s delicious, and profides a sugary flavor profile of orange maple syrup with a soft serve custard consistency. I’m not 100% sure I would agree with the locals that it’s the pinnacle of ice cream, but it is definitely worth a visit when coming to the great north east of the United States.

If you want to find the Creemee Stand yourself,  I recommend visiting them when they’re open during the summer. They’re closed during colder months of the year. The address to find them at is:  716 VT-100, Wilmington, VT 05363.

What Other Places Have Creemees?

If you’ve every experienced something similar to a creemee but it goes by a different name, I’d like to know! Leave a comment below. Or, send me a message on my contact page. I’m always on the lookout for other types of “ice creams” and for some reason I find it hard to believe that only Vermont and western Massachusetts have this dessert.