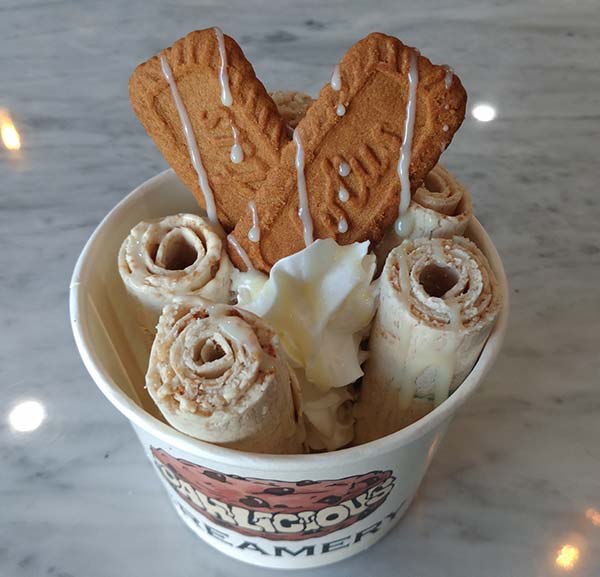 This newly opened ice cream parlor is located in the South Bay of Los Angeles, and it might be Torrance’s first Thai rolled ice cream shop. As a result, it’s trendy and makes beautiful/aesthetically pleasing creations for an Instagram shot (as seen in the creation to the left).

On the other hand, and perhaps this is because they only opened within the last few weeks, this shop was something of a logistical nightmare. Only a few people are allowed inside at a time (even though there is more than enough room to allow more people to enter), and the rest are forced to wait outside in the heat. Furthermore, they don’t have a set line outside, which created this awkward loitering line blob as a result. What’s worse, even after some people had left, it still took another 10 minutes before they let another group in and out of the heat. In total it took upwards of 45 minutes to get my rolled ice cream creation, during which time, I saw at least two groups of people leave to find alternatives. I heard tale from a little girl in line(maybe 8 years old) who said she waited ~5 hours for the rolled ice cream when this place first opened (the story was confirmed by her mother). Holy Roly Ice Cream! What is this, Hall H at Comic-Con?! Is the photo opp really that important? Or perhaps is the ice cream just that good?

Ingredients are: a cookie butter base, Speculoos cookie crumbs mixed in, a spritz of whipped cream, condensed milk drizzled on top, and then two Lotus Biscoff Cookies to Garnish the whole thing. It looks delicious, but there is a lot beneath the surface that I want to talk about. And to make sure I get across each point succinctly, I decided to do the obsessive orderly tactic of listing straight strengths and weaknesses.

Even with the harder consistency to spoon through, I liked the ice cream. Speculoos were not my go to choice when thinking about cookies, but it works out decently well, and I did enjoy that part. Furthermore, the creation itself is the trendy Thai rolled ice cream that looks good on your social media. But, at the end of the day, it might not be worth the waiting hassle, and it did feel like there were some short comings to taste in regards to topping quantity.

Perhaps one day when they figure their shit out I’ll come back to give them a second chance, but until then, I just give it one heavy sigh…

If you need to see this disappointment for yourself, Dahlicious is located at 4172 Pacific Coast Hwy, Torrance, CA 90505.

Want me to try your new ice cream shop?

If you’re looking for honest feedback, I’d be happy to try your shop out, and then give you honest tips from behind the comfort of my own keyboard- where I feel anonymous, “brave”, and safe. Simply leave me a message on my contact page, and I’ll see what I can do to give your shop a fair shake.