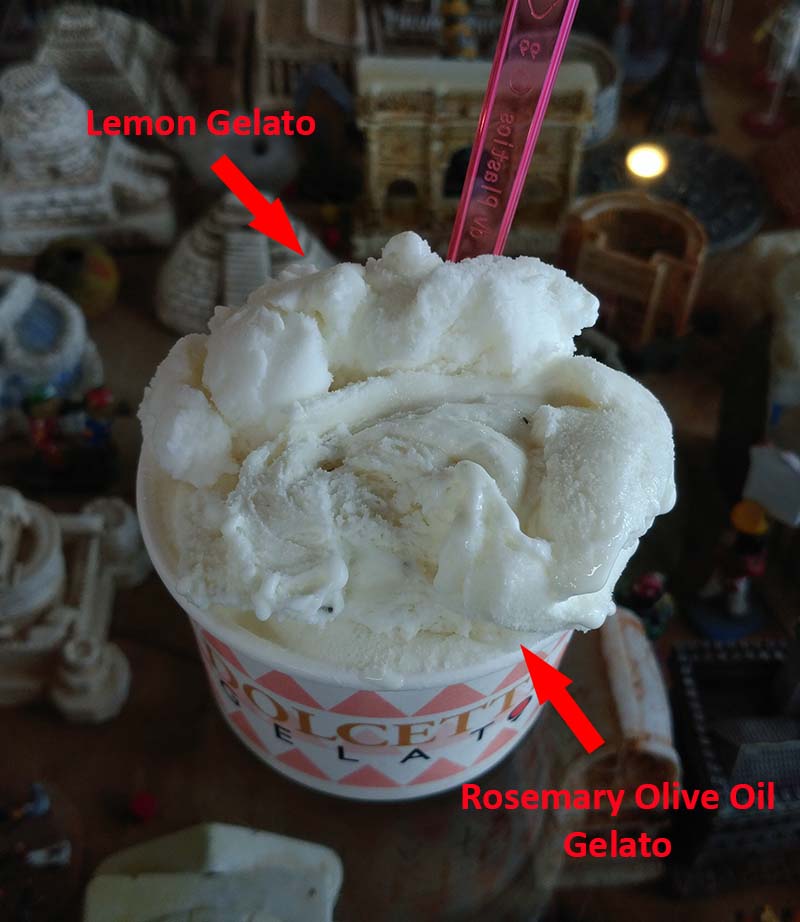 Dolcetti Gelato- located in Salt Lake City, Utah. A classy AF place offering some exotic and delicious gelato options that are not always found at every gelato shop in a metropolitan area. This time around, I tried two scoops at once, hoping they’d go well together. Lemon and Rosemary Olive Oil gelatos.

The lemon gelato is your standard Italian lemon taste, closely resembling a limoncello liqueur (sans alcohol). It closely resembles many other high-end lemon flavors, in that it isn’t super sweet like Minute Maid lemonade, but it isn’t overly sour as if it was a straight lemon citric acid. And because it is a gelato, it is softer and a little creamier than a standard premium ice cream. And as creamy as that was, even that wasn’t as creamy as the gelato using olive oil with rosemary.

For the second part, the olive oil was light and a great supporting flavor. There is a beautiful glisten that comes from the oil mixed in, without becoming excessively slick or greasy. It has an almost buttery taste without being butter at all, and there is a soft texture that is accentuated even more so because it’s a gelato. Then comes the rosemary. Small bits of the seasoning are speckled around the gelato. They don’t really blend into the cream much, but when tongue touches the herb or your happen to bite into one, a burst of strong rosemary flavor comes forth, carrying all the way into the aftertaste. As a blend of both olive oil and rosemary the taste ebbs and flows between the lighter olive oil base and the intensity of the rosemary. A beautiful and classy flavor.

The Two Gelato Together

Holy Roman Choir Batman! The best way I can describe it is elegant. It’s got three basic components (lemon, olive oil, and rosemary), but in tandem, the flavors together are worth more than the sum of the ingredients that comprise them. The olive oil gives the lemon a softer citrus accent, but improves it with the buttery aspect to give it a touch of class. Like James bond using a silencer. Or a Telsa using the electric engine (even though engine isn’t even the right word) over a loud combustion engine. It isn’t as loud or in your face, but in some ways is better, not in spite of the lack of intensity, but because of the lack of intensity. It’s… classy.

The only downside is that the rosemary texture can feel a little weird when the rest of this creation is so smooth by comparison, but truthfully that is a necessary evil. In order to have this lighter olive oil lemon with a few sparing intense rosemary flavor bombs, it’s totally worth it.

Conclusions About the Utah/Italian Creation

Pros: Light, classy, with a smidgen of sophistication.

Downsides: Yes, because no one is perfect. First and most importantly (even though I didn’t really talk about this above), Dolcetti Gelato’s sample limits. With so many exotic flavors offered and different combinations to try, how am I supposed to know what I want in only three teaspoons of flavor. Are we really breaking your profit margins that much with the one gram worth of gelato per sample? If that’s the case, then maybe you shouldn’t spend as much on all the fancy wall art or glass encased “miniatures” tables.

Secondly, however delicious the gelato was, the portion size was small enough that it impacted the price to taste to quantity ratio. With high quality and average price, the low quantity turned what could have been a stellar place into above average.

Overall, a really good place, and probably among the best in the state, and if nothing else, the best in Salt Lake City.

There are tons of gelato places all around the country, and I’m proud to admit I’ve tried a few. You can go over to my royal reviews page, and see about the more recent gelatos I’ve tried and reviewed. And every single review is written in the same and quirky way as this one. So if you liked this, there’s a good shot you’ll like some others as well.