Old School Ice Cream Seemingly in the Middle of Nowhere 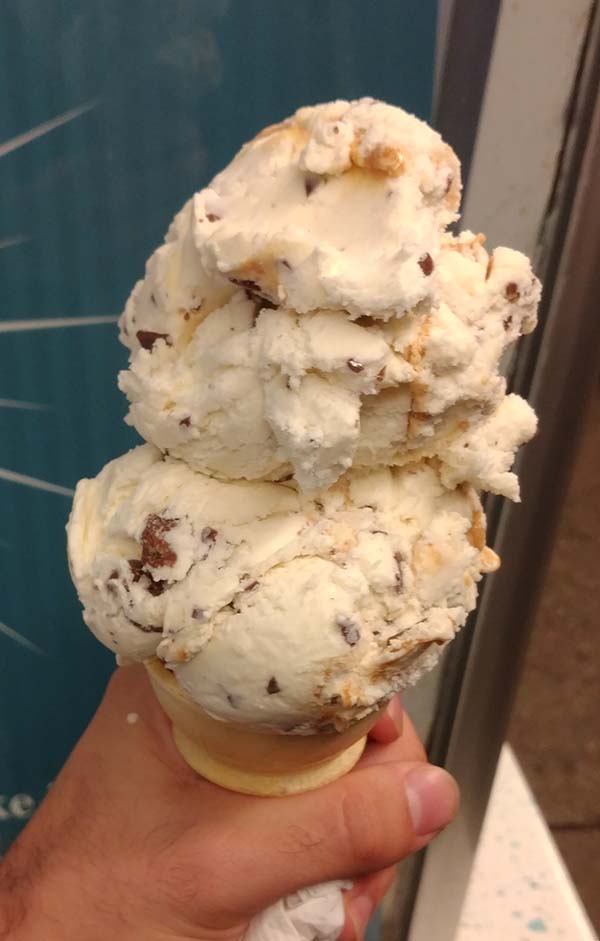 Sometimes you stumble across something and it needs to be shared with the world. This is how I feel about Footie’s Ice Cream in general. Driving outside of Ithaca, NY, myself and a traveling buddy heard tale of an awesome ice cream shop that is kind of in the middle of nowhere, NY.

So we’d be eating ourselves silly that day with scoops on scoops of ice cream, and after my sugar levels tanked in the car, I took a mild power nap to recharge. The next thing I know, it’s already dark and we’re pulling over to into this stop that is lit, not by the lights from the streets or surrounding houses, but from the bright under-glow beneath the sign bearing it’s namesake- Footie’s Ice Cream.

It looks like an old school ice cream stop- no inside, just a small overhang to keep you out of the rain when ordering. There are huge signs littered around the glass pane windows with the enormous slew of ice cream options available, all for a price that seemed pretty damn affordable. We’re talking like national chains with huge economies of scale (Baskin’ Robbins) prices here. I was digging every second of it and even in my sugar comatose state, I new this is exactly what I needed in my life. After asking what were the flavors I needed to try here, I was told two words that would seal my fate that night: Muddy Sneakers.

As I mentioned kind of, it was beginning to drizzle outside, and I felt the term muddy sneakers felt appropriate. So with the absurdly low prices, I went for a medium. I mean, I didn’t want to insult the people right? I was on my ice cream quest and I felt if might be rude to order anything less. (Side note: I think it might have been just after this place I came to realize when you order ice cream from three or more establishments in a day, it’s ok to go with a small on the final visit.)

Holy cow! Do you see the size of the monster photographed? It’s practically the size of my whole head!  It’s absolutely ginormous, and it’s less than $3 (as of 2017).

As far as downsides go, I will say the consistency is a little bit harder and closer to that of a Thrifty’s drugstore ice cream, but who cares?! It’s less than $3 in total.

Beyond ingredients, or consistency though, I think the best way to describe this ice cream experience would be to mere focus on its size. Saying this thing is sizable is an understatement- and this is coming from an adult in their mid twenties. If that’s the case, how much more awe inspiring would it be to a child? The cone would be bigger than the size of their head, and as their eyes grow wide with anticipation, their appetite only grows with it. And when the cone is handed to them, even though there’s intense excitement, a small panic induces as the moment of realization hits them.

The child says to themself, “How do I eat this? It’s like trying to lick the face of a mountain, and I’m not supposed to touch the rocks with any other part of my face or body. So how am I supposed to conquer such a mountain?”

And then, after a moment’s hesitation, the child throws all caution to the wind as if to say “screw it.” They go face first into the monstrosity, barely even registering how much of the cone is actually getting into their mouth and how much just ends up on their face. And in an almost barbaric and unrelenting act of gluttony, the cone gradually shrinks, until there’s nothing. The cone is no more, and it’s merely a memory of a challenge as it settles in the abyss of their stomach.

That, is the medium, and even though it didn’t touch on the flavor that much, that is the Muddy Sneakers flavor at Footie’s Freez.

In terms of price to taste to quantity ratio, they are killing it in the price and quantity areas. For any place to be considered good, they need to excel in one area, and be normal in another. So for regular ice cream shops, it’s usually excellent taste, in a standard amount, and the price is usually normal or a little bit expensive, but with a good taste and normal amount, it’s to be expected.

Tell Me About Your Small Town Ice Creamery!

As you can see, no shop is too small for me to attend as I love all ice cream, both fancy and simple. If there is a small shop that has been overlooked by most media but you feel deserves more recognition, let me know! Send me a message on my contact page, and I’ll do what I can to visit them and test their ice cream first hand!