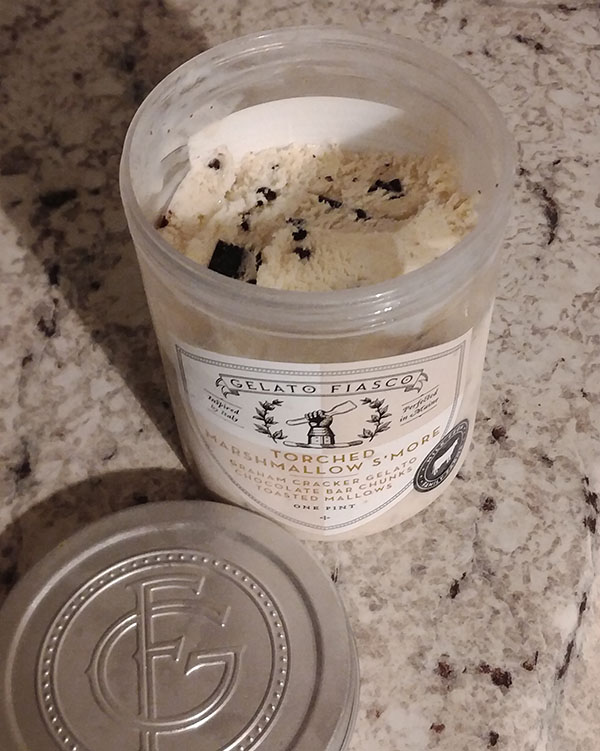 I’m a fan of the ice cream shop known as Gelato Fiasco. They’re one of the home town heroes in the state of Maine, and for good reason too. They provide fantastic flavors for grocery store consumption, and when you buy from them, you feel like you’re supporting the local dreamers as opposed to a corporate mega giant like Haagan Daaz. Basically, I think they’re pretty darn nifty. And the Torched Marshmallow S’more was no exception. To find out what made them great, read on below.

Sweet butter crumpets! The cream in this is practically in the beginning stages of turning to butter. It’s great. The chocolate snap is light in intial taste, but lingers the right amount. It’s always a mild disappointment when an aftertaste takes over the entire flavor profile, so the fact that this doesn’t here is commendable and well received on my end.

The graham cracker is something you wouldn’t normally taste unless you’re looking for it. It’s kinda like licking a specialty oreo while blindfolded and you’re unable to decipher the flavor until you read the package.

Like the graham cracker, the marshmallow is also not super strong in terms of taste. It comes in bursts like the pockets of dough in a chocolate chip cookie dough. The marshmallows even have a cookie dough-like consistency during bites. Definitely no smokey taste though. Which is kind a tiny let down, but seeing as how the rest of it is so good, I don’t think I’d even need it had I not noticed the label says it’s a “torched” s’more.

Between the chocolate, graham cracker, and marshmallow, flavor wise it actually has a really good balance. Kinda like a little Debbies type of s’more dessert individual package.

It’s not perfect, but for a grocery store pint of gelato, it’s really pretty incredible.

In terms of the consistency, it’s not quite as smooth or creamy as what you might get from a gelato shop, but it is certainly more easily spooned through than your standard Häagen-Dazs. The chocolate chips do have a strong snap to it, and that gives it a little extra texture and resistance during each scoop, but that’s hardly noticeable.

If you want to see where you can purchase Gelato Fiasco’s Toasted Marshmallow S’more gelato, you’ll likely need to come to Maine. You can find Gelato Fiasco in frozen dessert isle of most Hannaford’s (local supermarket), Targets, etc. and the price is fairly reasonable all things considered. Something of a mid-tier pint, in between Talenti and a Jeni’s.