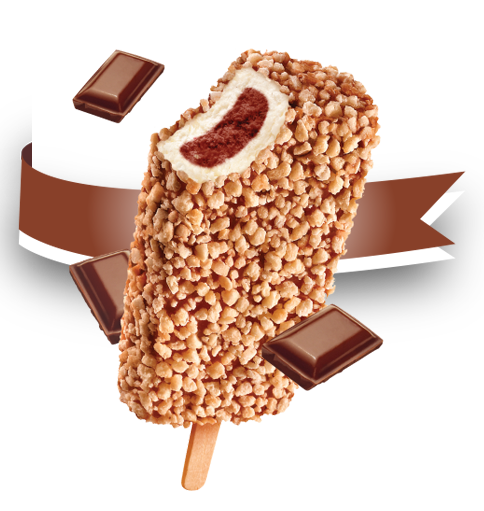 Today is an ice cream selection that is near and dear to one of the closest people in my life- my mother (insert ‘awwww’ sound effect). And because today is her birthday, I decided to review one of the flavors she enjoys the most, the Chocolate Eclair Bar from Good Humor.

You see, believe it or not, the night before I was born, my mother walked to a 7/11, bought this particular ice cream bar, and announced to my father that I would be born the next day. As she knew that this dessert was something special to her, it served as a symbol of good luck/premonition for my birth to come the following day.

Now, could it be that perhaps my parents had planned to induce labor the next day? Possibly. But! I’d like to think it was the ice cream entering my body via umbilical chord that gave me the strength and courage to make my grand debut. For that, I say thank you Good Humor, and thank you 7/11 for holding their ice cream.

Unlike a regular eclair, there is no intense flaky and buttery goodness. Also, traditional eclairs don’t use any vanilla, but are instead filled with a custard creme. The chocolate eclair bar you see before you is a play on this French pastry by using a mix of vanilla and chocolate ice creams, and while it still features the same oblong shape, it now resides on a stick for eating convenience.

There’s soft brown and white crumbling bits atop the outer shell offer a somewhat messy and course texture, and but strangely enough, it works. Despite being a standardized ice cream bar, the cream itself is still soft and delicious. There is a lovely combination in which a richer chocolate ice cream center is encased in an equal amount of a light vanilla ice cream. Together, they create the yin and yang of ice cream in bar form- complete and utter balance.

Sharing one of these with my mother was an absolute highlight, because as much as I enjoyed it, I think she managed to enjoy it more. Looking at the child-like grin on her face as she ate it, even though she is now 60, her face lit up like she was six. As I looked at her eat this, she’d raise her shoulders slightly and sheepishly grin while looking up between bites. Every once in a while she’d chuckle for no reason, and as I witnessed this, I began to chuckle too. And then the ice cream became even better. The vanilla and chocolate were both light, but blended in a way that was soft, smooth, and each bite became a reminder to take a step back and smile. According to my mom, this was the same feeling she chased, even when eating it the night before I was born.

It’s amazing to think their quality has remained consistent after all these years, and can bring my mother back to that moment all those years ago…

This ice cream is like the measuring stick against what all other ice cream bars should be compared to. Since it was my very first, it’s technically its been the automatic standard from that point forward. It’s simple, delicious, and my mom’s favorite. While biased here, it’s still actually really pretty good for an ice cream bar that features vanilla, chocolate, and this crumbly topping that’s not nuts, but more like Rice Crispies immediately after they’ve encountered milk for the first time. I thoroughly enjoyed this bar, and sharing one with my mom.

If you need to find out where to buy one of these bars, they are often sold in many a grocery stores, Targets, and Walmarts. Surprisingly though, I don’t see them in many gas stations or 7/11s, even though that’s where my mom originally got them.

Too Much Cheese? Try Another Review!

Many of my reviews can be a little cheesy when I get sentimental, but this isn’t always the case. If you want to read a different, less sentimental type of review, go to my royal reviews page, and see the most recent reviews that have been uploaded.