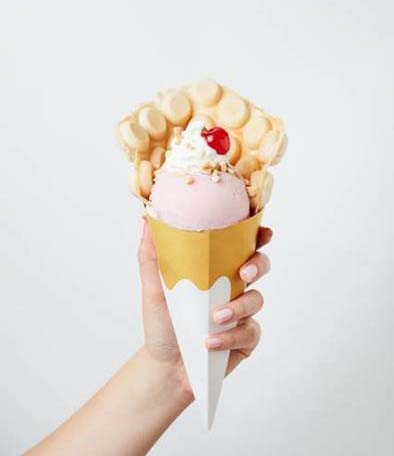 Semi-Breaking News! I mean, the news already broke, but I’m re-shattering this information to help spread it to all those in the ice cream kingdom! Halo-Top is announcing the grand opening of their first brick and mortar location open to the public come November 15th, at the Westfield Topanga Mall’s dining terrace.

Now before people begin asking if I’ll be recounting every single time a new ice cream shop opens, the short answer is no. The slightly longer answer is, because of the popularity and imprint they’ve already made on the world of ice cream, it would be strange if I didn’t give them their due and cover this momentous occasion.

So Exactly What is Halo Top?

For those who living under rocks, in jungles, or any state not on a coast, let me give you the give scoop down on the business known as Halo Top. Starting in Los Angeles, CA, Halo Top has risen quickly in the ice cream ranks due to it’s ability to offer decent ice cream with far fewer calories than normal. They’ve grown in popularity rather rapidly over the past few years is because of this. People hear about an ice cream with few calories, and decide to create an entire diet around it. This has been done in several different publications, including GQ Magazine, and while difficult, it can allow people to lose weight while eating it. This alone was able to create a viral movement around ice cream cleanses and diets.

As far as their ice cream flavors go, they aren’t half bad all things considered. I’ve had my fair share of “healthy” ice creams, and most of the time they either turn into frozen blocks of faux cream, or they taste awful because their missing that one four letter word beginning with L…. lard. Or fats. Basically the stuff that makes ice cream delicious and so… well, creamy. If I had to describe the overall tone and feel of the flavors from Halo Top in a single word, it would have to be: “sandpapery” (but in a good way of course). I’m not 100% sure why, but when eating ice creams from Halo Top, there’s this course and raspy feel I get in the back of my throat, and while it’s not like it hurts, it does feel a little bit weird. And in the same way that sand paper is used to refine a wood block into smooth greatness, the sandpaper of Halo Top shaves the calories, and refines your body into smooth sexiness (although the sexiness also comes after extensive exercise, but since that has nothing to do with ice cream eating, I chose to omit it. This is a working analogy, and not perfect, I admit.)

Why is Halo Top Important?

A lot of people lose their shit at the mere mention of Halo Top and logically speaking, the loss of shit is somewhat deserved. An ice cream that has a quarter of the calories in a normal pint, with four times the amount of protein; all while being vegan friendly and still delectable is extremely difficult to come by. Hell, it’s tough enough to find an ice cream that does just one of these, let alone all four.

Is it Worth it to Go to the Brick & Mortar Shop?

If you’re looking to try Halo Top at their new store location, you can find them at the Westfield Topanga Mall: 6600 Topanga Canyon Blvd, Canoga Park, CA 91303

What do you think of Halo Top?

As I said earlier, a lot of people lose their shit for this stuff. I’m curious to hear what you think too. Leave a message in the comments, or if you’re feeling a little more shy about you opinion, send me a message on my contact page, and let me know!
0 Comments
Use this image Like!
Share
IceCreamKing
Leave a reply