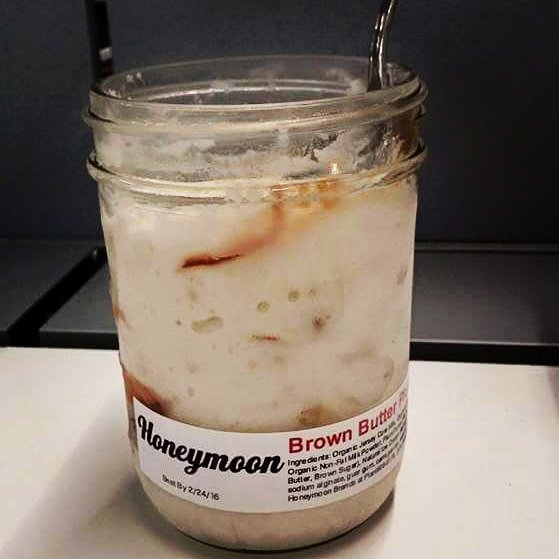 First off, I want to clear the air, yes, I know that this is ridiculously expensive and probably not worth it. But if I traveled back in time and forgot what this flavor tasted like, I would gladly drop the $11 it takes to purchase this pint of ice cream (which strangely comes in a reusable mason jar might I add), just so I can know what it’s like… again.

Now the flavor in this creation consisted of a sweet, but slightly tart plum, inside a brown butter base that can probably be considered a game changer. With most ice creams using vanilla as the base, it was glad to taste the sweet butter cream seldom seen in ice creams today. It may seem somewhat pretentious, but gosh darn-it I think sweet cream is a soft, subtle, yet supporting base ice cream. Beyond the base, they also throw oats into the mix. Perhaps it’s to change up the texture, or maybe they are trying to give it a starchy crust, and in turn a plum pie-like essence. Whatever the case, I wasn’t really a fan, but then again, I’m barely even a consumer of oatmeal, so these oats were lost on me. The real greatness of this flavor lies in their cream. O-o-o dear lord, the cream. I will have wet dreams about the creaminess of this flavor for days to come. For a store-bought ice cream, this creaminess is probably second to none. I had this in the freezer for a solid 3 days straight, and when I opened it to take my first bite, it was creamier and smoother than anything I had experienced from a store. If it didn’t know any better, I’d say it was an airy custard that I put in the freezer by accident. Seriously, I cannot get over it’s fluffiness. Like imagine the airiness of a giant marshmallow, with the spoonability of a creme brulee filling.

Overall, I probably won’t be purchasing this particular flavor again until I’m a multi-millionaire, but it was nice to “treat my self” and feel like the Ice Cream King I am.