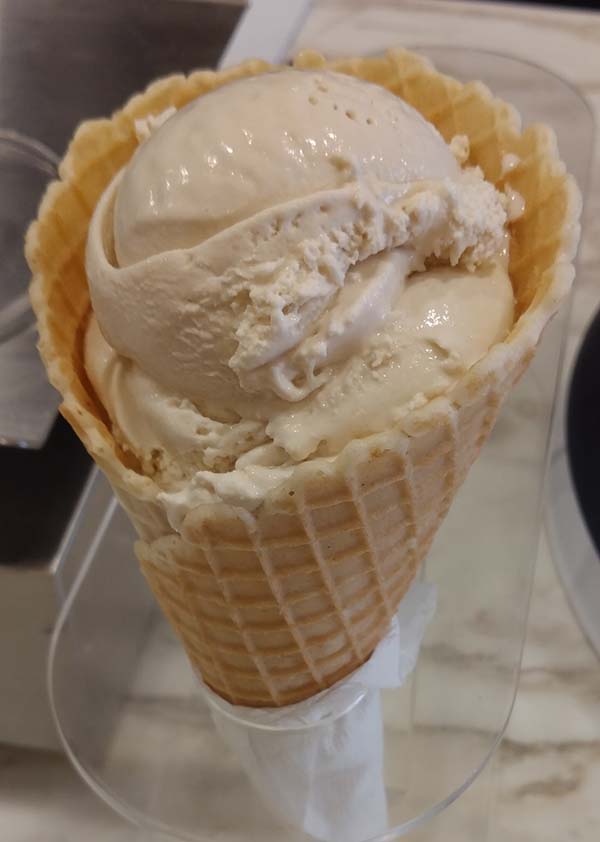 So the hypnotic emporium is a wonderful ice cream parlor in the more suburban area of Dallas, TX. Featuring an old school ice cream counter, loads of fun and unusual flavors crop up around this part, and all for fairly reasonable prices.

Ah yes, good ol’ JD & Coke. Most college students’ first cocktail, right alongside screwdrivers and jungle juice. In other words, pretty much when you want to get drunk without really tasting too much of the alcohol flavor. That’s what drinks like Jack and Coke were made for.

I mean, if it weren’t for the fun effects of inebriation, I don’t know how many people would drink what is essentially just a worse version of a regular Coca-Cola soda (i.e. new coke). The harshness of the whiskey downplays the normal effervescent carbonated sweetness of the Coke, and even if you do like whiskey, adding coke really takes away any street cred you might from ordering a whiskey in the first place. Not to mention, Jack Daniel’s might be well known, but I highly doubt anyone believes they are a superior tasting whiskey.

So what does all of this mean for the whiskey and coke flavored ice cream? Good question!

For starters, this ice cream may resemble the flavors of whisky and coke, but keep in mind this is still ice cream. Both flavors are downgraded a little bit with missing elements that would make it a true jack and coke. For one, no carbonation. It’s hard to get bubbles into ice cream, and it’s not here either. Secondly, the whisky is no where near as harsh as it would be normally, likely because there is no alcohol in it. The whole thing is actually far sweeter and creamier, like the melted vanilla ice cream that mixes into the soda of a flat root beer float… only with flat coke instead. So more sweetness and way less bite.

As for whether it’s good or bad, that’s a little bit tougher to answer. Depending on your age, there are two likely ways you’ll feel after tasting this ice cream.

Jack & Coke as an Adult

I think if you’re an adult, there is a far higher likelihood you’ll find yourself enjoying this flavor, and here’s why.

A lot of what I described at the beginning is a nostalgic feeling when it comes to Jack and Coke. Those times of pregaming before a long night of shenanigans would often start with a Jack and Coke. On those nights when you hadn’t prepared to drink and were only left with ingredients And even if there’s no alcohol to it, the mere tasting of its distinct flavor is definitely enough to trigger pleasant memories of past proclivities while drinking said beverage. Taking you back to those times with great friends making questionable decisions that you don’t regret in the grand scheme of things.

As for kids, based on what the shop owner told me, as well as my own deductive reasoning skills, they tend to hate it more often than not- and here’s why.

Unlike their elder counter parts, kids don’t often have nostalgic and fun memories of drinking to fall back on (or at least I hope not). Basically all they’re tasting is some whack Coca-Cola flavor. And since there’s no actual alcohol to speak of in this flavor, they don’t receive any delightful mind-numbing effects either.

On the off chance they do happen to like this flavor, it’s probably because they are emulating someone older they look up to in order to feel more mature. Either that, or they have a future of alcoholism awaiting them later in life.

I think normally, the flavor profile of Jack Daniels whiskey, and Coca-Cola soda is kind of terrible. Especially when there’s no alcohol in it. That said, it was still a quality ice cream, because of it’s ability to bring forth nostalgia from formative years of parties and college high jinks in general. Kids on the other hand will probably dislike the taste, and if they do like it, they probably shouldn’t.

Overall, it’s an interesting flavor to at least try, and even if you don’t get a full scoop, try and sample and see if those memories don’t come flowing back.

Tell me what you think

Please note that I do not encourage drinking to excess. I am not endorsing illegal shenanigans that come from drinking either. I merely stating that the taste can bring back possible memories associated with the taste of Jack & Coke. If you want to give me a piece of your mind about ice cream and drinking culture in America, please do so on my contact page. I’ll happily read what you have to say, and do my best to grow as a person after learning your perspective on the matter. I hope to hear from you soon!