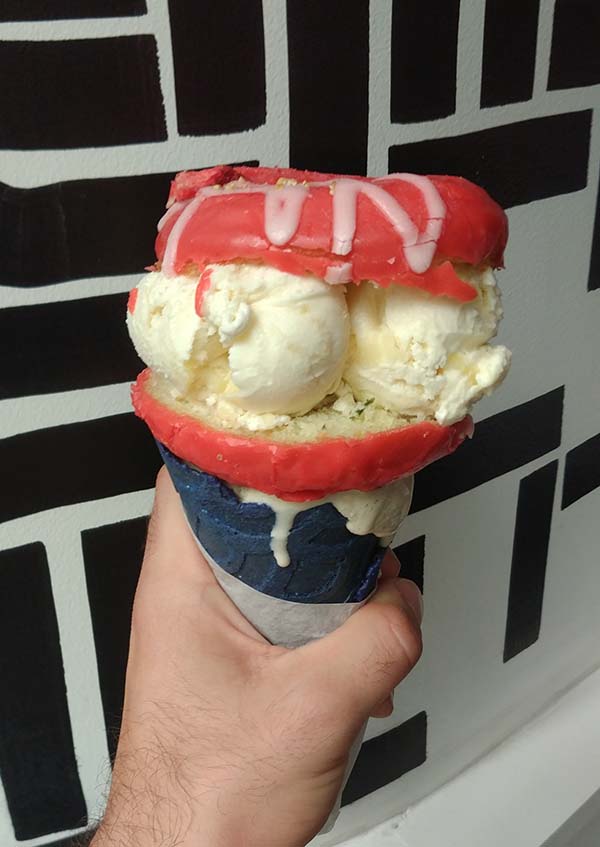 To which I’ll reply, “Impossible to say. The world of ice cream is so massive that there are too many categories to choose a single ice cream creation.”

It may be a somewhat political answer, but I truly believe it; and creations like the UFO Ice Cream Sammie are perfect examples of why I think this. They’re innovative, exciting, and give me hope that this golden age of ice cream will continue onward into the future.

I absolutely adore the peculiar inventiveness of Ice & Vice, while also still providing high quality flavors as well. So much so, I almost wonder if their ideas are alien to this planet…

As it says in the header, this creation features Pickles of the Carribean ice cream in a strawberry basil donut atop a blue corn waffle cone containing Olive Garden ice cream.

Translation: So there’s this strawberry basil donut, right? They cut that bad boy in half at the belly, and put this pickled pineapple and rum ice cream in between it. And then that donut “sammie” is placed atop a full ice cream cone! Only this is a blue corn waffle cone with olive oil and black garlic ice cream.

The whole thing is too much to tackle together, so it’s best to think of donut ice cream sammie and the rest of the cone as separate entities. Not just because of their different tastes, but because of their physical proximity and the construction of this dessert makes it nearly impossible to taste it as a single cohesive unit.

Next, take that flavor described above, and add it to the pickled pineapple rum. The pineapple and strawberry are an obvious mix for fantastical flavors, and I didn’t taste a single bit of the pickling (which is probably a good thing since I hate pickles). Following this new concoction, is the rum that follows up towards the end of the tasting to give the new thing an extra zing.

At this point we’re looking at a basil, strawberry, pineapple daiquiri with cream and bread textures intertwining like an ice cream cake. And much like a real cake, there’s loads of sugar in this bad boy, dialing up your energy and tasting sensations to 11. The whole thing is some next level sweet citrus cocktail of chilled dairy and confection perfection.

But we’re not done yet. It’s half time, and now I get to transition to the bottom half that my tongue has been neglecting for the past three minutes or so.

It’s interesting to take on this flavor after eating such an intense fruity and sugary creation. You’d think it would just fall by the wayside and become overpowered to a point of blended garlic/strawberry/pineapple weirdness, but that wasn’t the case at all. Almost like transitioning from dessert to appetizer, the contrast here was just as apparent. After biting into the olive oil & garlic, very little of the fruity fore taste came through. It was like wiping the slate clean, and then moving onward to this new and exciting flavor.

The flavor profile was really fascinating due to its subtlety. If you’ve ever had any other olive oils, you know that the flavor isn’t that pronounced here. It’s more a of a sweet cream with a slight buttery salt of oil. This would lead you to expect the garlic might takeover, as it surely is a strong seasoning in most dishes. The garlic here isn’t overwhelming at all though. Keep in mind I’ve had garlic ice cream in the past that resembles garlic bread and even just the clove alone, but here, it’s more of a small seasoning to accent the already light olive oil. The fascinating part was how THIS managed to wipe out the intense fruity sugar taste from the prior flavor.

The flavor blends exceptionally well with the cornflower cone. Because both focus more on the salt and savory aspects of flavor, they compliment each other beautifully. Like a symphonic ballad from an orchestra the entire eating experience is like performing a waltz. As the dancing continues the garlic gradually crescendos and decrescendos like a slow moving pendulum- growing with each bite and then fading away shortly after. The overall flavor is that of a fancy garlic corn chip taste, and as a dance partner it gives off a casual and familiar feeling to it, but is somehow still classy. Like a poor housemaid attending her the ball, the entire experience leaves me breathless. And before I know it, this familiar dance partner is gone, only to leave me wanting more.

With all of this said, nothing is perfect, so now I’ll go into some of the faults throughout.

I’m just going to come out and say it. This thing is a bitch to eat. You have to practically unhinge your jaw just to get through the donut, and even then, the thing will likely discombobulate about halfway through the donut. So to start out, I thought, “perhaps I’ll just end up licking the inside until there’s enough of a gap for me to bite down more successfully” (see photo of me mildly seductively tackling this ice cream). I had to give up this futile attempt as I was getting nowhere, all the while the whole bottom part is melting.

Flaw number two is that it melts too fast while you figure out how to consume this thing. This isn’t really anyone’s fault, as the ice cream probably wouldn’t be the same if it was harder, but still, it’s an issue I had to overcome, and therefore a flaw all the same.

The final problem would be the sugar crash. About an hour after eating this unidentified flying dairy dessert, I crashed. Hard. This dessert is not for the diabetic or faint of heart. As a guy who was eating ice cream two to three times per day while traveling, even I had to take a breather after tackling this one.

Eating both one right after another was like going to an EDM concert turned fancy ball. I managed to experience both of these flavors at the near pinnacle of their own respective fields, and even though both were different tastes, they were each spectacular in their own ways. The sweet intensity of the donut sammie contrasts the subtle elegance of the corn and olive oil garlic. Despite the price of ~$10, I would actually say it’s worth it in this instance.

If you want to know where to find this crazy delicious dessert, head to 221 E Broadway, New York, NY 10002.

Don’t worry, my reviews aren’t always this long. But I would like to think each is fun and unique in their own way. So if you’re interested to finding out what I have to say about other ice cream flavors, read more on my royal reviews page.