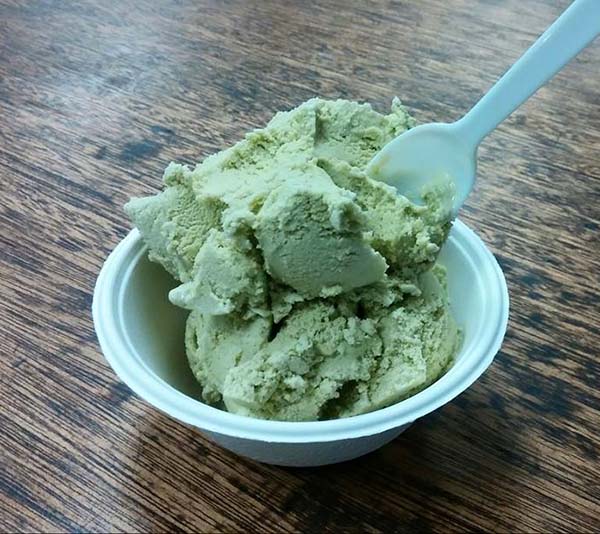 So before we dive into the limited run Lupicia Tea ice cream, let me take a second to talk about the humble ice cream appreciation that comes from Kansha Creamery. Kansha Creamery is a small scale ice cream shop located next to a couple of Japanese restuarants in Gardena, CA. They don’t make much ice cream, and they are only open five days a week. When they run out of ice cream during a particular week, it’s gone and you won’t see it again for at least six more days. This often creates a sense of specialness with each small batch of ice cream, and you have to rush over to get some before it all sells out and they’re left with nothing but vanilla.

The time I went was on a Thursday for that particular week, and  they were already out of their famous cinnamon oatmeal ice cream, as well as one other flavor. Was I frustrated that I had already missed out on a flavor to try? Sure. But in my anger, I decided to have some tea ice cream to calm down. This is the story of that tasting.

This Japanese inspired ice cream is probably the epitome of Zen and after eating it, for a brief moment I had gained enlightenment. To encapsulate my time eating this, I felt the urge to write a haiku about my experience:

Translation: The green tea ice cream was calm and soft. Despite what course texture you may think you see in this picture, the ice cream itself is light and airy. Beyond the texture was a green tea flavor more subtle than any other green tea I had ever tasted before. So subtle in fact, that for a moment I couldn’t taste the tea. I thought to myself, where was the tea flavor? What is this taste of nothingness? Maybe it wasn’t that this tasted like nothing, but this is what all nothings taste like. But this couldn’t be, there was some small starchy taste that wasn’t tea, but still present in the ice cream. I began to ponder, and try to forget what I thought tea tasted like. And it was only after this meditation of trying to taste nothing, that I tasted something. It was the tea. The taste of the tea appeared on the center of my tongue as if to say, “you now understand the essence of green tea. Now go forth, for you are ready.” Perplexed and befuddled, I left this ice cream shop, not knowing if what just happened to my tongue. I think it was good…

The analysis of this cream is that it is not heavy at all, and if you so chose, you could probably eat this all day. I’m not sure if you’d want to though, because the taste is so faint. Believe it or not though, I actually appreciated this ice cream. It seemed like it’s purpose was to just calm me down and teach me how to taste again. For that I’d say mission accomplished. But for those looking for a little more impact, I might suggest other places.

Overall, I’d say this place is good if you are looking for a soft sweet after a heavy meal and just looking for something to calm you overall. Becuase of it’s lightness, I felt like I could eat this non-stop. But after finishing, I did feel satisfied. Not just in terms of hunger, but spiritual as well. If they still have some by the time you make it over, you should certainly give it a shot.

If you liked the haiku and ice cream analysis, I have plenty more where that came from. Simply go to my Royal Reviews page and check them out!