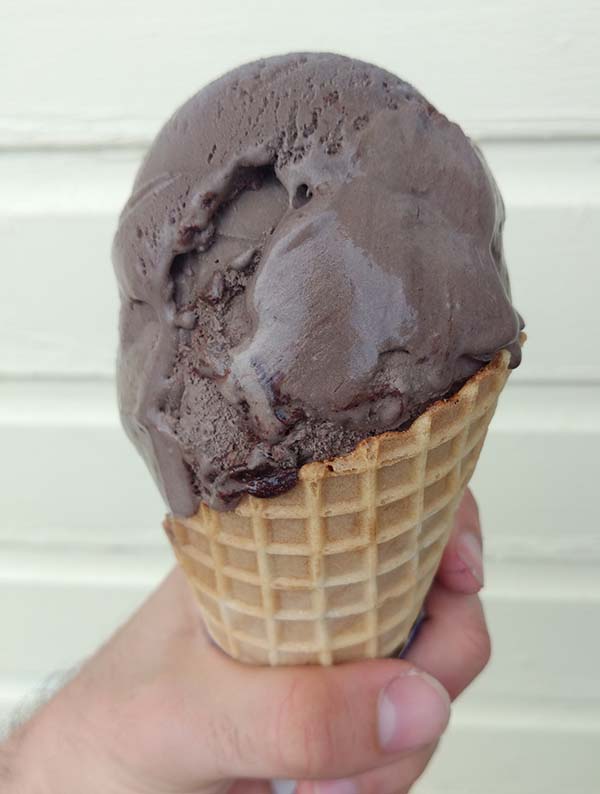 So Lagos is one of those classic ice cream scoop windows located alongside a winding road seemingly in the middle of nowhere, New Hampshire.

Along my voyage to this loaction, my phone’s GPS had cut out for the first time, and I was struggling to find my way around the forests of New Hampshire. Turning right to head east, only to have the road bend and eventually go west, I was getting a bit frustrated. And with the summer heat beating down in a rental car that had a broken A/C, it was nearing my limits. So to summarize, I was annoyed. Annoyed at technology, annoyed at myself, and annoyed at this ice cream shop for being so hard to find. I was fully prepared to let this sour mood inflect my ice cream tasting experience.

But then something happened. I arrived at Lagos.

Upon walking up to the scoop window, I was met by a kindly employee who starting engaging with me after noting my introduction and ice cream journey. What’s more though was that she seemed genuinely interested in my travels and experiences. Alongside several generous samples of delicious tasting ice creams, my mood began to change for the better. Suddenly I was cracking jokes and having a great time.

There’s an old saying, “If you make me change my mind about you, I’ll hold it against you.” That wasn’t the case here, but I like that saying. Because after my willingness to let my preconceived notions influence my opinion of Lagos, all of that went away in a matter of seconds after talking to their employees. What’s more, one of their samples spoke to me. It was the Monkey Business ice cream.

I noted above that a sample spoke to me. Well the sample was more of a whisper. But it intrigued me enough that I felt compelled to continue this conversation between myself and the flavor in full scoop form. After a couple of licks, I began to learn more about the flavor- its origins, its strengths. It’s a banana ice cream with nutella and chocolate. Not necessarily something you could 100% guess at first glance.

It’s strengths were it’s strong banana first impression and the chocolate-nutty hazelnut follow-up. The chocolate acts as the support to the two aforementioned flavors, and lingers in the aftertaste before you take another bite and start the whole thing over. The banana will begin to fade into the background before long as the nutella takes over as the main player, but it won’t disappear completely. It’ll be around in the back, hanging out with the chocolate as the second act after the new first impression of nutella’s nutty chocolate qualities.

All of this was what I learned within the first few licks of the conversation. After that though, the ice cream took me somewhere. It was to a place. This place was filled with trees, but it wasn’t a monkey filled jungle like I’d initially anticpated. It was to a warm forest in the mountains somewhere. Then it dawned on me. This ice cream wasn’t taking me somewhere new, but it was showing me a memory of my past. It was showing my the forest surrounding the mountain town of Lucerne, Switzerland.

The reason it was showing me this was because the flavor had a striking resemblence to the first banana nutella crepe I’d ever experienced in my life. The banana first impression, and the hazelnut and chocolatey finish. Even it’s super soft nature to get all over my face as I devoured it like a helpless toddler eating a cake. This was a prefect recreation of this dessert, the first time I tried it in Europe. It was so fantastical, yet somehow had been pushed back to the annals of my mind. And it wasn’t until I began conversing with this flavor in depth that I began to remember.

There was a rocky start, but the kind people and delicious ice cream of Lagos managed to make me change my mind in no time at all. The Monkey business tastes like a decadent banana nutella and chocolate crepe found in europe. It melts fast, but as a whole, the flavor is delicious.

If you want to experience the kind people at Lagos, you can struggle to find them yourselves at 71 Lafayette Rd, Rye, NH 03870.