So before I even go into the ice cream tried, at Mikey Likes It, I would be remiss if I didn’t take time to tell a tale of Mikey and his love for the city. And not only his love, but the love that the city has for Mikey Likes It.

Origin & The City’s Love for Mikey

So I met Mikey sitting on a bench outside his establishment in the Lower East Side of Manhattan, and I gotta say, the dude looked like a fucking pimp. Without a care in the world, he just posts up outside his shop, one arm resting behind the back on the bench, watching people go by. Every once in a while he’ll engage with a person to strike up a conversation, and with that sly smile of his, people will come in more often than you might imagine.

I was super impressed with the man, and after ordering my own Big Daddy ice cream waffle sandwich, we proceeded to talk about Mikey Likes It, and some of the cool stuff he’s got going on. He tells me about the origins of turning his life around after getting caught selling drugs, and then proceeds to note how the city helped him bounce back. It’s because of his love for the city and the people who inhabit it, that he now takes it upon himself to help them just as they helped him. So whenever he posts up on the bench outside, it’s mostly to stay ingrained in the community, say what’s up to all the fans and regulars, and make sure he doesn’t lose a feel for the streets by hiding behind the window pane of his ice cream fortress.

Just as he tells me about his love for the streets, a beat cop walks up. She smiles and says hi to Mikey, and the next thing I know, she’s fully engaged in our conversation, telling me stories about her undying love for Mikey Likes It. For instance, if  she finds out that someone hasn’t been to Mikey Likes It, she often “encourages” them to try out Mikey’s business. Don’t worry though, it’s not as nefarious as you might think. As a part of the NYPD, a lot of tourists ask her about directions to certain eateries and local landmarks. Whenever someone asks the way to a dessert establishment, she rolls on them, “Oh no. You don’t want that. You want to go to Mikey Likes It in the Lower East Side.” She tells me she’s single-handedly responsible to for the addition of at least 100 new customers that come through. One time, she went so far as to give a local kid some money, with the only stipulation that he had to spend the money on ice cream at Mikey Likes It.

Did I say Mikey was a pimp earlier? Because I totally meant to say mafia boss. He’s got the police on his payroll! This is some next level guerrilla marketing, where you get people in positions of authority to give out directions to your business. If that doesn’t scream ice cream underworld kingpin, I don’t know what does.

Totally kidding about the mob boss stuff (Please don’t whack me Mikey). In all honesty, the lady cop tells me she’s proud to send people to Mikey Likes It because he is such a positive influence on the community around him, always smiling and greeting the people that walk by. “Not to mention,” she says, “Mikey has the best damn ice cream in town.”

This officer might be a little biased, but she is right. Mikey is a great force of good for the town, and the ice cream is solid.

About The Ice Cream

I know, I know. I’ve been so dazzled by his swagger and that I forgot to talk about the actual product.

His shop’s ice cream consistency is thicker and richer than traditional ice cream shops, to a point that is could make Cold Stone Creamery look like soft serve. Mikey told me how he loves super thick and rich ice cream, but a lot of the fancier and unusual ice creams around town are often softer and use greater amounts of air mixed in so they can have higher profit margins. It was from here that he decided to go about making ice cream the way he liked it, and business soon followed. People from all around town would come to Mikey Likes it, and now he’s got two locations- one in Harlem, and the original on the Lower East Side (less than two blocks from where Mikey lives).

All the flavors are usually references to some piece of pop culture- mostly musically, but some film as well. And of all the cool ice creams he offers, the pinnacle of the creations offered would have to be the Mac Daddy ice cream sandwich. A Belgian waffle ice cream sandwich, with great cinnamon undertones, that will wipe any thoughts of Eggos out of your mind. But wait, this Mac Daddy can go even higher, as your regular waffle goes full red velvet. That’s right, a red velvet waffle, ice cream sandwich. It’s just so beautiful. It’s probably the best thing in the shop, and one of the best desserts in the city. 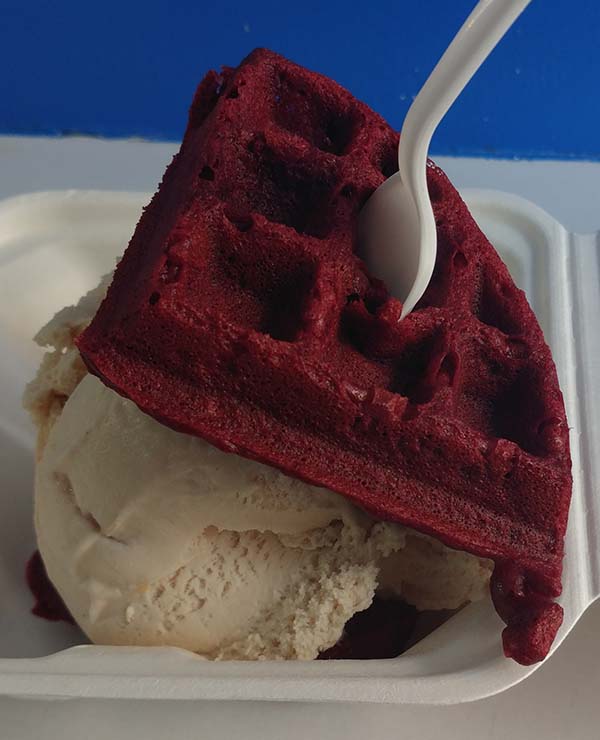 If you want to try Mikey Likes It for yourself, you can find them either on the Lower East Side at: 199 Avenue A, NYC, NY, or  you can try them now in Harlem at 2500 Fredrick Douglass Blvd, NYC, NY.

Tell Me Other Ice Cream Shop Owners I should Meet Up With!

I absolutely loved meeting Mikey and hearing his story. As I travel it’s not a guarantee that I meet up with the owner and get to have a heart to heart with them. That’s why I feel so fortunate that I was able to meet Mikey. If you know any other ice cream shop owners willing to meet up with me as we discuss ice cream, reach out to me on my contact page, and we’ll see about setting something up.