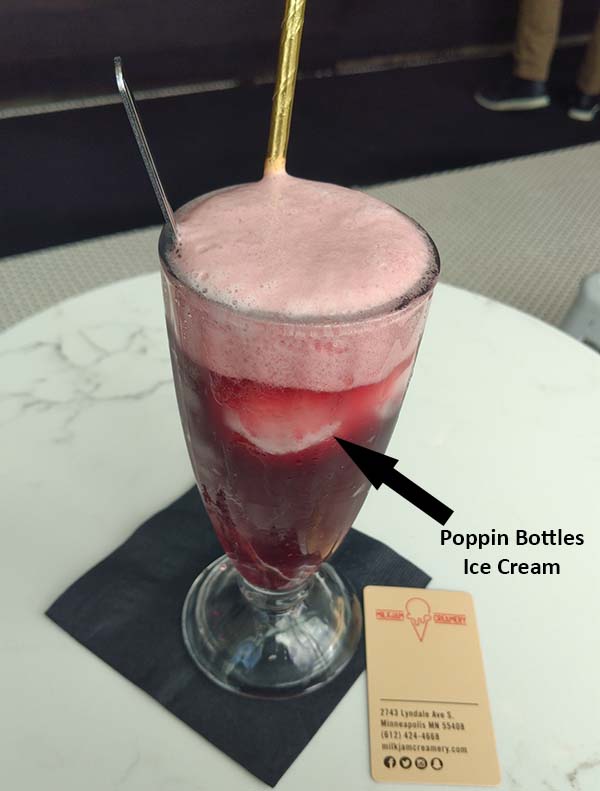 Adult float? Poppin’ Bottles? Gold straws? What is this- an ice cream rap video? Are we about to get crunk up in dis beezy?

You best believe it!

For this particular adult float, I decided to go with champagne ice cream (with enough alcohol in it to card patrons), afloat in a fruity Framboise Lambic. Basically, semi-solidified champagne in a raspberry ale that almost tastes like a cider or mead.

Diving right into this alcoholic dessert like a baller diving into a pool of money, it was ridonculously delightful. The champagne wasn’t dry, but sweet, with enough of a bite to give off an almost effervescent feeling to it. This mixed well with aforementioned raspberry ale because it too is sweet with a small bite from the ale. Together, these two both provide the fruity sweet and ever so slightly bitter flavor combos that are descriptively the same, but somehow different. Like in a rap video when you have two females dressed in similar scantily clad attire grinding up on the same rapper. Both could be described as beautiful, bewitching, and downright enchanting hoes, but they’re different in terms of their milkshakes, and the ingredients put into each.

In terms of sitting well, it wasn’t heavy at all, and in fact, can be consumed what felt to be almost endlessly. To borrow the words of the poet Redfoo from his work in Champagne Showers, “a party-rocker, from night til noon, it’s about to be a champagne monsoon.” You see, the beer was light enough to allow us to eat this for extended periods of time (i.e. from night til noon), but is strong enough to get people potentially sloshed and wrecked (like as if they were in a boat during a monsoon of some sort).

The only conceivable flaw is that over time, you begin to taste less of the champagne, and it eventually turns into sipping murky Framboise through a gold straw. Now as to whether this is because of the smaller quantity of ice cream, the strength of the beer’s flavor, or the potency of alcohol numbing my taste buds, I cannot say for certain. It’s probably some combination of all three. So if you really just want to taste the Poppin’ Bottles, this ice cream creation may detract strictly from the ice cream.

Did I feel basic ordering a champagne ice cream in a fruity beer that’s served with a gold straw? Sure. Do I care? Absolutely not.

The actual taste wasn’t perfect, but I still loved it. Sweet plus bitter in not one, but two fruity alcohol combinations was amazing to experience. Over time, the beer flavor began to drown out the champagne, but meh, considering it wasn’t heavy, it didn’t make you feel bloated, or even taste that bad for having alcohol in it, I’ll consider this a win.

I really do love the concept of high class adult ice cream floats and encourage everyone to try one (assuming you are over 21 and do not have any issues with alcohol substance abuse).

Let me know about other alcoholic ice cream creations!

I think alcohol ice creams are a growing trend in the US, and while we are still in its beginning stages, I’ve only found a few of them across the country. Let me know about any cool alcoholic ice cream spots you come across, and I’ll try to make my way over to review them! Send me a message on my contact page, and I’ll get back to you about trying it as soon as I can.