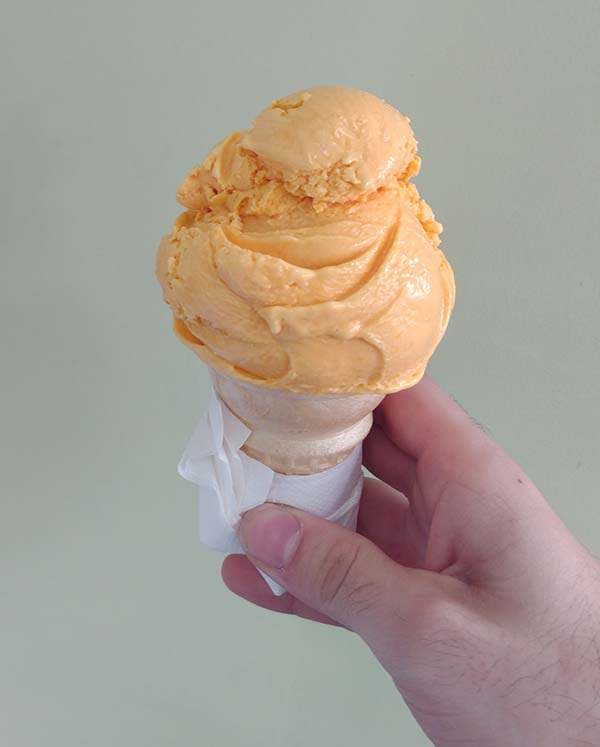 So Mitchell’s Ice Cream in San Francisco is considered a must for many ice cream enthusiasts in San Francisco, as the locals love them so much, lines form around the block (luckily I didn’t have to experience this hassle, as I chose to walk up right after they opened at 11 a.m.). It’s definitely more of a typical/classic ice cream shop, with old fashioned sugar and cake cones, ample scoops, and surprisingly reasonable prices considering, well… you know, it’s San Fran…

While there, I was lucky enough to meet the daughter and son of the original owner, Mr. Mitchell himself. And oh boy, they were just as sweet as the flavors they serve. And after a delightful talk about their ice creams and the shop’s history, they informed me of some of their more non-traditional tropical flavors that were among their best sellers. After hearing their list, one that stuck out to me was mango. It was morning, and hearing the mango flavor reminded me of a time in my youth when my parents got loads of super fresh mangos from a friend. And in order to eat them all before they spoiled, we had to eat them several times per day, mostly for breakfast. This nostalgia combined with the child-like dream of eating ice cream for breakfast is something that could not be overlooked. Furthermore, if this is what the people of San Francisco decided to be the best this place has to offer, I too wanted to indulge in their apex of deliciousness.

My order: “One scoop of homemade mango ice cream please!”

For starters, the creaminess of the ice cream is fantastic. I imagine Mitchell’s probably found the sweet spot (pun intended) of cream to air ratio a long time ago, and haven’t felt the need to change since. It’s a classic ice cream, and doesn’t try to be too much of something else- like a gelato, soft serve, or custard. Just standard ice cream- or should I say, the standard for ice cream.

As for the actual flavor, at first I was pretty surprised. It was an unexpectedly refreshing rendition of the mango flavor. The flavor didn’t taste forced or artificial, but kind of like genuine mango. After taking a closer look, I found out why. There were what appeared to be actual fibers of mango mixed in intermittently into the ice cream.

Now some of you may be thinking, “Now hold on. I’ve been to Hawaii,” Or, “I’ve got a mango guy, and he gives me the freshest/sweetest mangos ever, but only at certain times of the year. So how can a place in San Francisco get fresh mangos when they don’t grow them there, or the mangos aren’t really in season?” Well, the answer is simple really. These aren’t the absolute freshest mangos. There are certainly better real mangos if you go to Hawaii or have them when they’re at the peak of the season, but the pure fact that they were able to import real mangos and utilize them in their ice cream speaks volumes.

So basically what I’m trying to say above was this. The creaminess is on point and probably has been for decades since the former Mr. Mitchell ran the place. The mango tastes like real mango, but it isn’t the absolute sweetest mango out there. And you know what, that’s extremely respectable, and still worth giving the flavor a try. I’ve seen a lot of places ruin mangos with flavor that kind of tastes chemical-like and it kind of detracts from the authentic feelings the ice cream shop is trying to convey. When I close my eyes, what I see doesn’t transport me to a tropical island with a beach and a mojito. No, I’m transported to a local farmer’s market, where mangos are imported and sold to everyday people, who just want a little bit of that sweet island nectar.

If you want to try the ice cream that has survived the test of time since the original Mitchell ran the place, you can find them at: 688 San Jose Avenue, San Francisco, CA 94110.