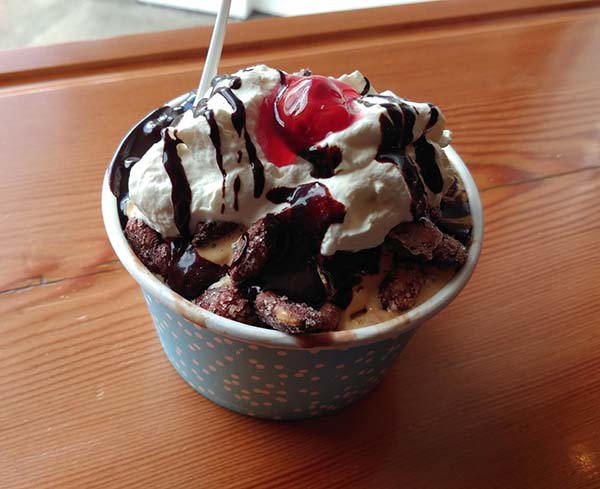 Molly Moon has been heralded as the Salt & Straw of Seattle (these are words taken from a Salt & Straw employee). I however only semi agree. While offering a wide variety of rotating seasonal flavors that each can contribute to the store’s overall adventurousness, I felt like the flavors created might have been a little too safe to be considered an equal to Salt & Straw. For example, Molly Moon did have flavors like Honey Lavender or Vegan Scout Mint (which are delightful flavors), but never did I fear for my taste buds with ideas that sound disgusting but end up tasting delicious.

Wait a second… Maybe the employee at Salt & Straw really recommended these flavors since they knew that they were superior in variety and innovation. *Gasp! Those sneaky Salt & Straw bastards…

Anyways, Molly’s Favorite is a hefty monstrosity on a tried an true classic. At its core, it’s a sundae, but with some subtle changes. Instead of standard vanilla, Molly Moon uses a combination of their Melted Chocolate and Salted Caramel flavors. Instead of pecans or walnuts, they use roasted hazelnuts. Of course there’s going to be some whip cream, but here, the whip cream is fresh made, and commands nearly the same respect as the whip cream you can receive from the world famous Grom Gelateria (shops located in NYC & LA). From the small changes here and there, you can tell that Molly is definitely trying to make something special here with this sundae. To evolve the already delicious sundae to a half step higher with new ingredients is like taking the wheel and putting spikes  and assault rifles on the spokes- just to show people that you aren’t messing around. So would this sundae be the next step in the sundae evolution? Or would it end up being like all other assault rifle wheels before it, and just be a hot leaded mess?

I started out by spooning into this creation, noting the different texture consistencies throughout. And the one word that comes to mind is “heavy”. While more of a smooth heaviness, there was definitely weight behind each ingredient. Spooning through the hot fudge is like spooning through a delicious chocolaty tar pit in La Brea. The whip cream is certainly no Reddi-wip, and while not super dense, it certainly is a more condensed pillow goodness as opposed to the airy store bought counterpart. The ice cream is smooth, but less airy and therefore probably has a higher milk fat content and will probably be- you guessed it, heavy AF when sitting in your stomach.

But let’s go through both the good and the less than good.

The Melted Chocolate and Salted Caramel together are an obvious match made in heaven. As salted caramel is quickly becoming the nation’s favorite flavor, the slight salty essence brings about a nice balance to the melted chocolate- which is basically tastes like a chilled and creamified cocoa. Another area of greatness was the whipped cream. While I noted that it’s somewhat heavy, it’s also gosh darn delightful. Instead of hugging a cloud, it’s closer to hugging a soft pillow, and you know what, that’s still pretty soft.

The Less Than Good:

I will say that the hazelnuts were definitely an interesting addition, as it almost provided a more smokey flavor to the whole kit and caboodle, but truthfully, I miss the traditional pecans or walnut bits. The whole hazelnut mostly got in the way of spooning through the sundae, making me think I was back at work on a Monday. It simply had more downsides than upsides. The other biggest downside was the cherry. Seemingly insignificant, I know, but seeing as how you go through so much effort to make the whipped cream, hot fudge, roasted hazelnuts, etc. it really seems like a let down to not use a special type of cherry- or at the very least, one that is distinguishable from the mason jar cherries, which can be found at every damn supermarket.

In the end, for a sundae with the namesake of the owner, it’s certainly a solid creation (flavors combo, whipped cream, and fudge), but personally I’d say that Molly Moon has better (more unique) flavors to offer- and it would be nice to see a signature sundae that really tries to push the boundaries of ice cream, instead of just one-upping a couple of ingredients and calling it a day. This is especially important, seeing as how a regular sundae costs around $9 (when tax is included).