The Chocolate Almond Blizzard of Utah 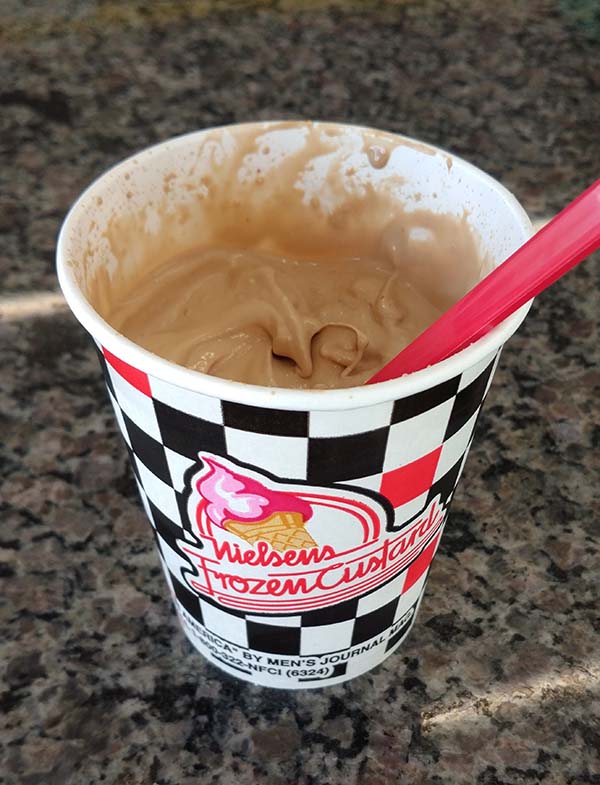 Local hero of Salt Lake City, Nielsen’s is a successful family chain of frozen custard shops, who boast to be the best in Salt Lake City, and even in America. This place has creations that have been heralded by Men’s Journal & USA Today to be in the top 100 things to eat in America… (sourced from the Nielsen’s website).

Bold statement, I know. Even as the Ice Cream King, I’m just thinking, “Woah, let’s not get ahead of ourselves just yet.” There are many great things to eat in the US, so choosing this place must be damn near perfection, right? Is this worth such an accolade? I guess there’s really only one way to find out.

Walking into the shop, I give my usual shtick and then proceed to ask the guy at the counter what they did to deserve a spot in the top 100? Guy doesn’t know; but, he does say they’re known for their concretes, and it is their best seller. I tell the man, “Perfect, walk me through what one of those bad boys is.”

Now there’re two ways to describe it. His impromptu abstract, and my slightly more carefully thought out explanation. I’ll give you both, as they are both technically accurate, and both are needed. His response while looking up with searching eyes, “It’s kind of like a spoonable milkshake.” He nods to himself in approval.

Now for me, take that base concept, but imagine a Blizzard (like the ones from DQ) that’s thick, swampy, and downright heavy- but in a good way. I don’t think milkshake is the best way to describe it, because there’s no way in hell you can suck this through a straw. To tie this into the creation’s name it actually kind of is like pouring concrete. Back in the day, I used to work in masonry and pour concrete for a summer job. Not many people know what it takes to lay cement down, but it certainly is not easy. It’s lumpy, heavy, and will give you stains for days if you spill any. In other words, it’s a pretty damn good analogy here.

After deciding on the type of creation, I ask for his expertise once again. What flavor would you say is your signature creation, or perhaps the most popular. He doesn’t know about any signature creation, but he does say the CMA is the best selling flavor at Nielsen’s. Surprisingly, it doesn’t stand for Country Music Awards at all, but instead chocolate malted almond. Great, I’ll take that! I’m not really a fan of country music anyways…

Tasting it, the malted milk chocolate is soft, creamy, and has that fantastic chocolate milkshake taste. It’s a milk chocolate that’s blended well and doesn’t come off as too potent or over the top. It’s… classic. This is a really good classic malted chocolate taste- in a rich and smooth frozen custard, which makes it go does oh so smoothly.

Inspecting further though, I notice something else. It was a little lumpy (which goes against the smoothness I literally just described). At first I was thinking it just wasn’t blended well and there were pockets of harder ice cream- excuse me, frozen custard still inside. Then I realized those lumps were actually the almonds. Full almonds. Not just the tiny blended bits. This is a bit of a double edged sword in a way. When you bite into the almonds, it creates an intense momentary nutty sensation, but this kind of detracts from the overall taste of the malted chocolate. Also, because if the way it’s mixed, somehow the almonds mostly clump together in a single region, thus disrupting the balance of chocolate and almond. I actually like the taste of the almonds, but perhaps if it was blended more, I could have enjoyed it as a whole, instead of in intense increments followed by nothingness.

So how does it rate?

That’s right, decent. Certainly not in the top 100, but if I’m honest, I suppose it does rank above a blizzard. I may complain about the almond imbalance, but it did have some good qualities too. Of course I’m talking about the frozen custard that makes up this creation. Frozen custards differ from ice creams in that the pasteurized egg yolk of a frozen custard makes it, well, more like a custard. It’s this high quality component that helps to give it the boost above the queen pin of dairy.

On the other hand I asked myself, “The frozen custard was so good. Was getting it in a concrete a mistake?”

I mean, in some ways it feels like putting a performance sports car engine inside a Kia Rio. Not to say that Kia Rios suck, but they are the cheapest option available at the vast majority of all rent-a-cars. So I’ll just leave it at that.

Concrete Conclusions About the CMA

What’s the lesson here? In the words of contemporary philosophers Panic! At the Disco, “If you talk, you better walk. You better back your shit up.” While this was a perfectly fine spoonable shake, I would not place it as highly as some other publications. The frozen custard part is good though, so I’d probably actually recommend just getting it in a cone/cup instead in their famous “concrete” creation.

As I said above, it was decent. Not spectacular, but not horrible either. Especially when you consider the PTQ ratio. It’s $6 for a pint (roughly, as I do not think that cup above is a full 16 oz), and truthfully, as heavy as these things are, one of these concretes is more than enough.

Let Me Know What You Think!

I’m always happy to hear what people think about my blog. If it’s something specific to this post, leave a comment below. If it’s about my reviews or the site in general, feel free to mosey on over to my contact page and send me a message. I’m seriously thrilled when people reach out, so don’t feel shy!