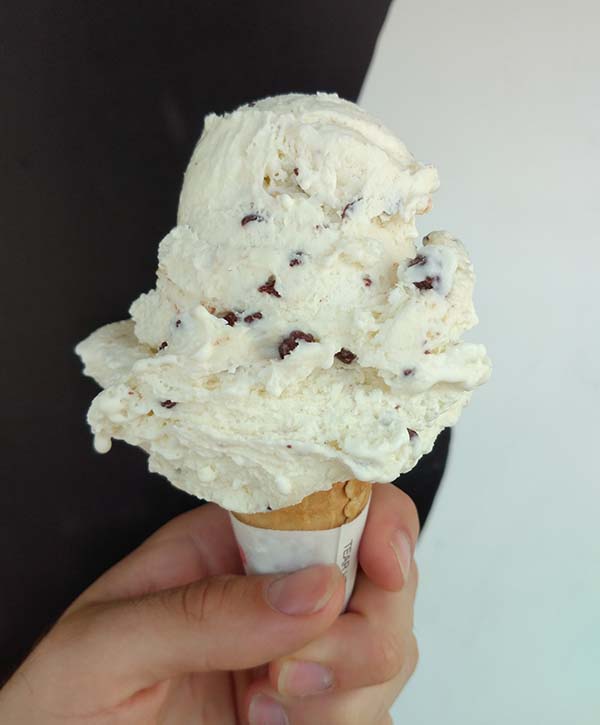 Driving along a boulevard/highway in Middleborough, MA, around once per mile you’ll come across several unassuming shops- all with gravel parking lots, and large old-timey signs that scream advertising design of the 1970s. Like all those other 1970s shops, Peaceful Meadows is no different. Don’t let the swanky black and white background of this photo to the left fool you. It’s pretty much a standard building painted white with black spots to look like a cow.

If you didn’t know it was amazing or you weren’t in the mood for ice cream at that exact moment, it would be so easy to drive right by and not ever give this place a second thought. Because of that, I like to call this place one of the hidden gems of Massachusetts.

At first glance it’s a seemingly straightforward flavor. There’s coconut, the ice cream is an almond base like in the center of an Almond Joy, and ample but not overwhelming amounts of chocolate chunks are included.

But upon further investigation, this ice cream has a depth that I found surprising. Actually, it’d be fair to say its depth comes from wonderfully shallow components. Let me take a step back to explain. Since coming to New England, I’d noticed quite a few heavy ice cream shops with really thick and rich ice cream. And perhaps it’s only by comparing ice creams one right after another, but this ice cream is different. It’s soft, lighter, and slightly melty, but not downright oozing. It’s about one step away from being a gelato it’s so soft!

Beyond the texture, the flavor was equally light and soft as well. I was blown away. And again I stress, it could very well be because of the recent excursions to Mystic Drawbridge or even Ferris Acres. If I had to describe it as a whole it’s like a crystal clear beach in the Caribbean. The light texture and flavor of the ice cream is like a soft fine sand submerged in knee deep water. The modest almond/coconut combo is like the clear water that sparkles in the sunlight. There’s no heavy pollution of excessive ingredients, but a couple of chocolate chunk fish can be seen swimming around the tropical creation. And because the chocolate chunks are living in harmony with this ice cream ocean, there is no need to force anything. You just take it all in, like a day at the beach, and become one at peace.

Fantastic light flavors, serene feeling, and soft cream. An obvious choice for anyone in the area. And with ample scoops at an affordable price, I could definitely see myself going back there once I’m in the area.

If you need to figure out how to get to Peaceful Meadows, they are located at 109 W Grove St, Middleborough, MA 02346.

Send Me A Message!

Want to suggest a different New England ice cream shop? Perhaps you just want to tell me that almond joys and coconuts in ice cream suck? Or maybe you want to tell me you actually liked the piece? However you scoop it, send me a message on my contact page, or leave a comment below. Please be gentle with your words 😉