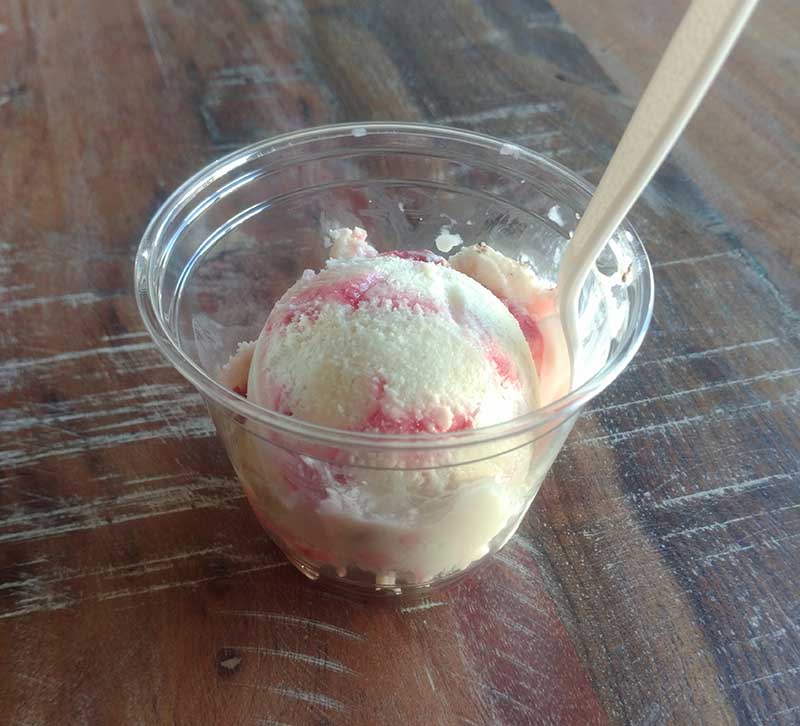 Pumphouse Creamery is a quaint ice cream shop in the suburbs outside the twin cities, about 20 minutes or so from the university.

Before I get into the flavor profile and experience, let me just say, finally, a sour cherry flavor. Don’t get me wrong, I love me some sweet bing cherries, or black cherries, but in all honesty, sour cherries are sorely underrepresented among ice creams, and I really appreciate Pumphouse for shining a spotlight on this flavor.

To me, sour cherries conjure memories of my young childhood. From ages 1-13, my family would go cherry picking every summer, preserve and freeze them, and then turn them into pies throughout the year. This was a family tradition for many years, until the sour cherries farms didn’t survive the harsh droughts in Southern California. As the tradition died out, so had my memories faded into the distant mists of time. That is, until I went to Pumphouse.

Taking a single bite of this ice cream, memories, tastes, and experiences came flooding into my mind. Like a collage of picture frames, each memory only lasted a millisecond, but each milli-moment had a hours of footage playing.

It starts with the memory of hot summer days picking cherries, where a dust trail would kick up behind me as I eagerly ran through the cherry tree farm. I should note there wasn’t even dust around the store, it’s just that’s how powerful this taste-memory was.

The next memory would go to the pitting of cherries- a strong sour taste emanating from this mass of cherry citrus limp fruit. Again, the sour cherries here aren’t that strong, but the brain places this memory there.

Finally, I would remember the cherry pie (a la mode of course), eating this with our family after most holidays- 4th of July, Thanksgiving, Christmas, etc. This is probably where the flavor of Pumphouse most closely resembles. The pie definitely has a sour cherry element to it, but it’s suppressed with the cups of sugar we put in it, in order to make sure the flavor isn’t wincingly sour. And Pumphouse’s sour cherry is similar. Sour cherry that’s somewhat suppressed with the cream and sugar, so it’s a beautiful dichotomy of sour and sweet together. Short of the pie crust, this is one of my treasured childhood desserts, wrapped up into a single scoop. With a beautiful finish, it’s a flavor I absolutely adore.

In conclusion, wow. The flavor sent me to a place I hadn’t been in a long time. The actual flavor was no where near as potent as true sour cherries, but more closely resembled the filling of a cherry pie. I truly enjoy this flavor, because it was able to evoke a memory. I don’t expect this flavor to have an hallucinogenic properties that would cause everyone to remember things, so this place might not taste anywhere near as good to them as it does to me. If I’ve said it on my home page, I’ve said it a hundred times: “I will most certainly be biased” [in review/coverage]. And in this instance the subject of my subjectiveness was a cherry picking/cherry pie memory. So for that, my attraction to this flavor is far higher than what people may normally think. That said, I stand by my analysis, and encourage anyone else who has fond memories of sour cherry pies to come to this place.