As the Dairy Center of an Ice Cream Sandwich in Portland, OR 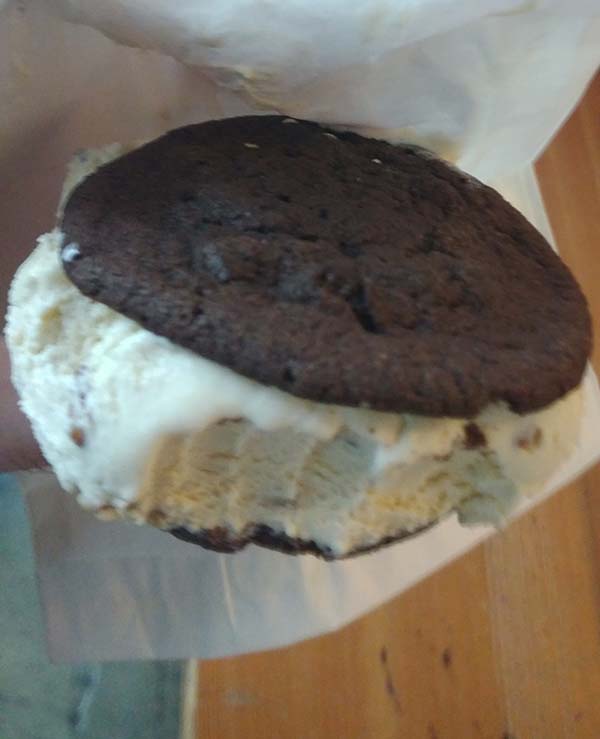 So my experience with Ruby Jewel wasn’t exactly like the rest of my ice cream adventures, so please pardon me as I walk you through the experience that lead to my ice cream choices this day.

Walking in, it’s like a hybrid ice cream/coffee shop. Cool music was lightly playing in the background, a few young adults looked like they were studying, and a group of women were discussing something over at a table. Taking this all in, I walk up to the man behind the ice cream counter and tell him about my ice cream journey while asking what he recommends. He looks over at the women around the table and nods to them noting that they are the owners and would probably know better than anyone.

Surprised that the owners were still here, I walked my way over to them to get a little run down of the place. After a 5-10 minute conversation about ice cream and traveling, they turn me onto one of the flavors they are most proud of, the Brown Butter Bourbon Pecan; and dammit if it wasn’t delicious. The bourbon is apparent, but not too strong or really even tasting like intense alcohol. It’s a sweeter version of bourbon, almost like a maple bourbon, but when combined with the brown butter, it has a little bit of that sweet buttery nutty taste, in a way only brown butter and pecans can do. [For reals, brown butter is so amazing, I have no idea why it isn’t used more often as an ice cream base]. The pecans are placed intermittently throughout the ice cream, and it doesn’t overpower or steal the show away from either the brown butter or the bourbon. Just a nice accent and supporting flavor, to bring this ice cream to the next level.

All of this I noticed from just the sample. I’m sold already.

So I commend the owners for their recommendation, when the worker then asks the immortal question: “Cup or cone?”

I pause for a moment to mull over this crucial question, when a little old lady walks up behind me and excitedly tells me that she overheard the conversation about my journey and says I should try their ice cream sandwich, seeing as how it’s what they’re known for. Seeing as how the last recommendation I took was definitely a winner, I nod in agreement. Unfortunately I am then faced with another question: “Which cookies would you like for your sandwich?”

Shit. I definitely didn’t think this far ahead, and I’m struggling for an answer once more.

Welp, seeing as how she was the one who convinced me of the sandwich in the first place, perhaps it’s a good idea to ride this wave to the end. So I order a Double Chocolate Chip Cookie Brown Butter Bourbon Pecan Ice Cream Sandwich, and wait to see what next tasty levels this creation is brought to.

As I eluded to with the small sample description, the ice cream here is next level. So soft and creamy, but doesn’t feel like it’s melted in order to get said feeling. It teeters on the consistency of a custard or gelato, while still remaining within the ice cream family. Anyways, regardless of the flavor, the texture is solid. However, the ice cream sandwiches they are known for, can surely be improved for the better. If you couldn’t guess, I was a little disappointed after the amazing sample.

The sandwich as a whole… it’s well…

For starters the cookies are a bit hard and tasted slightly stale. This could have been mitigated with a lower class or harder ice cream. But seeing as how I noted how soft and creamy the ice cream was, this was actually the problem. If you look in the picture above, you can see after one bite the ice cream is already pushed out the sides, and this trend only continued into a cool mess as I ate more. As far as flavor prob- er profiles, the double chocolate began to overpower the delicious bourbon, and while chocolaty bourbon is actually kinda awesome at first, towards the end of the sandwich you could barely taste the bourbon at all. So after completing the sandwich, it was hard to remember the ice cream, and I was just left with a chocolate cookie aftertaste- much like what a person experiences after eating an Oreo with milk. Very few people remember the milk, but the cookie taste still lingers. In this case, I WANTED TO TASTE THAT MILK.

So overall, while the Brown Butter Bourbon Pecan ice cream is solid and delicious, the sandwiches they are known for could use improvements. Perhaps they could heat up the cookies so that they melt slightly, become easier to bite through, and don’t push out the ice cream as much. Then again, the temperature may end up melting the ice cream, resulting in the same messy problem. Arg, this is so tough. I regret listening to the old lady, instead of the owners all the way, but lesson learned. I’m still glad I was able to taste the brown butter bourbon, however short the taste lasted.

If you want to try the ice cream at Ruby Jewel (and perhaps stay away from the cookie sandwich), they have multiple locations in Portland, OR. The Ruby Jewel I visited was at 4703 SE Hawthorne Blvd, Portland, OR 97215.

Send Me Your Ice Cream Recommendations!

Looking for me to review a specific flavor or ice cream shop? As you can see, even if I semi-regret your recommendation like I did the little old lady in the story above, I still ended up going with her words of “wisdom”. So feel free to drop me a line via email or reach out to me on my contact page. I’d love to hear your recommendation, and see what corner of the ice cream kingdom to venture towards next!