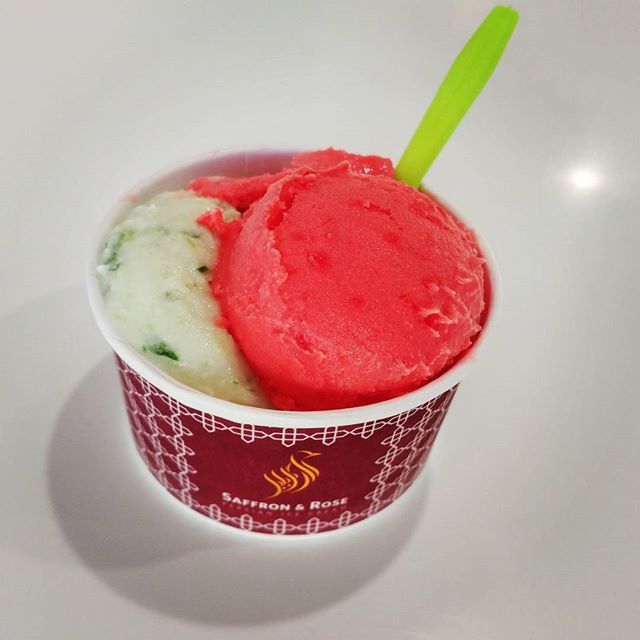 Keep in mind this is not one flavor review, but two.

Walking into the shop, I peered into the ice cream window to scan Saffron & Roses unusual list of flavors. Immediately I was drawn to the cucumber, and when I asked to sample it, the employee handed me a second sample, telling me it goes well with watermelon. And golly-gee-willikers, she was right! The two are absolutely fantastic together.

Neither flavor is super powerful, which is strange considering that it has watermelon in it. Most places (not even limiting myself to ice cream here) that serve any type of watermelon flavored product, have a super sweet and potent watermelon taste. But not here. Like most flavors at Saffron and Rose, these two are made with natural ingredients, and this causes the taste to become more of a mix between the sweet cream base and whatever is mixed in. And because these are two supporting flavors, neither one takes over, or fights in contrast with the other. It’s just a nice duo supporting each other like two type B friends who only want what’s best for one another. Type As (as in A plural) can hang elsewhere for the moment. Geez! Not everything is about you type A!

Anyways, going back to the description of the cucumber flavor, remember how fancy AF cucumber water is? It’s just water with a hint of cucumber, but damn if it isn’t refreshing. Now imagine this feeling/taste applied to a sweet cream ice cream. REFRESHING, no? But now you’re thinking hey, cucumber water is nice and all, but I need something more. I need more impact. That’s where your watermelon comes in. Just a little something extra.

Now let’s talk consistency for a second. The cucumber has actual chunks of the vegetable, like little green flecks of produce to make you believe you don’t need that salad for dinner anymore. So this adds an interesting texture to combine with the standard sweet cream ice cream.

The watermelon in the other had is the same but a little bit different. Still has parts of the fruit mixed in, but instead of a standard cream, it’s somewhere between a cream and sorbet. What I mean by this is, because there is actual watermelon mixed in, the fibers/water content of the fruit give it an ever so slightly icier consistency, that is somewhere in between ice cream and sorbet. Now what does this mean? Absolutely nothing! But it was something I wanted to note because eating them together did take me slightly by surprise and something I felt was worthy of noting in my review.

If you want to try this majestic combination for yourself, you can find them at: 1387 Westwood Blvd, Los Angeles, CA 90024.