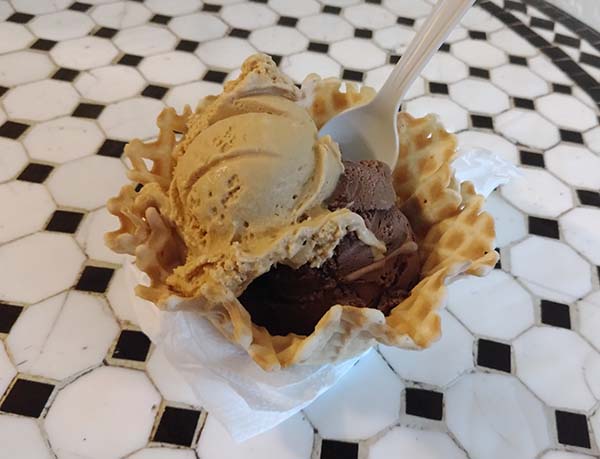 Scoop is less that 25 miles away from the heart of Silicon Valley, where most things (from rent to cocktails) are definitely overpriced. So the fact that smaller scoops here can start at under $2, this blew my mind. With original handmade ice cream flavors, they are able to practically compete with drugstore prices. Granted, the scoops might be a little bit smaller than a drug store, but still! This crazy to think a small mom and pop shop can compete with the giants in price. So on the PTQ (price to taste to quantity) ratio, this place scores better than most places in all of California.

Now let’s get into the flavor reviews.

Latin Jazz is pretty much a Mexican chili chocolate. And for those afraid of the word chili thrown in, no, we aren’t talking about your chili that you put on cheese fries or hot dogs. It’s the chili that gives you a nice little spicy kick towards the end and is an interesting contrast to the idea of ice cream, which  is usually cool and calming.

So I take a bite, and the first thing I notice was the intensity of the chocolate. This definitely had some depth with a subtle bitterness, like a dark chocolate. Due to it’s color and appearance, I willingly admit I prejudged it, thinking it was just a milk chocolate, but my taste buds slap me in the face saying that is clearly not the case. I’m thinking to myself, “Ok, I can dig it. It’s not the most intense chocolate, but it is certainly not something light like what I was expecting.” As the flavor mulled around in my mouth, I was thinking about the flavor and thought something might be missing. I swallowed, and it hit. The chili! But it wasn’t missing! It was waiting, like a chupacabra stalking a goat, just waiting for the right chance to strike. A slight burning emitted from the back of my throat. The chupacabra has stricken. The chili is an aftertaste burn, and while the spice can compound the more you eat, it was never an unbearable heat.

As far as texture consistency goes, it’s a bit airier, so it freezes slightly harder than say the salted caramel and doesn’t spoon as smoothly. If you look closely at the photo above, you can almost see the slight differences in between the consistency of the two ice cream scoops.

Salted Caramel is the new classic that can be found at most ice cream stores around the country. It takes the sweet caramel taste that all should know and love, and then gives it the ever so slight salty twist. Working out two sets of taste buds at once is nothing new in the food world, but it’s something that I think more and more people are beginning to search out, as salted caramels are slowly becoming the best sellers in ice cream shops all around the country. That said, a salted caramel lives and dies with the balance of salt to sweet. Here, they do an good job in making sure it isn’t too salty, nor does that the caramel sweetness completely drowns out the salty contrast.

As you might have noticed, individually, the flavors are pretty decent. They’re interesting, and have pretty good flavor profiles; but when combined together, oh man, this becomes something truly awesome. It’s awe, and then some because it covers basically every flavor element together. Let’s see, there’s: salt, sweet, bitter, and spice all in a single bite. Like the power rangers Megazord, each part of the ice cream has a part to play, and together they are like a gigantic monstrosity of epic flavor! Imagine my tongue was some giant monster Rita Repulsa had conjured, and the entwined ice creams were the Megazord. As the spoonful of ice cream zips past my toothy defenses, it’s like each individual flavor is a blow to the tongue, ultimately rendering it defeated in ice cream bliss.

The salted caramel and spiced dark chocolate are good on their own, but go insanely well together. So much so, it’s basically the embodiment of Megazord, Captain Planet, or some other hero that comes when heroes are combined. Truthfully, I think would be a fantastic idea to get some sort of Salted Caramel Latin Jazz swirl going on as a main staple in the shop.

To find this hole in the wall ice cream shop, you’ll need to keep a vigilant eye. Because even at their address of 63 Broadway, Fairfax, CA 94930, they’re kind of easy to drive by.

Sweet! Let’s just say I’m pretty jazzed to hear that! Go to my Royal Reviews page and you’ll be able to see the most recent reviews as they’ve come through. I hope you enjoy!