A Surprisingly Refreshing Way to Start a Morning 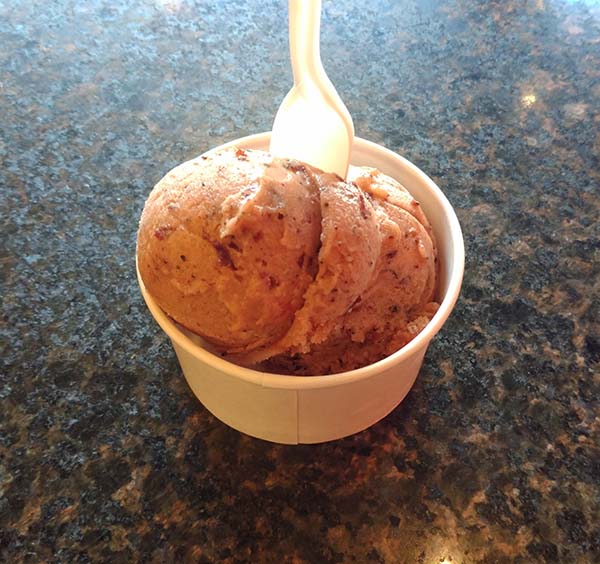 So Sebastian Joe’s is a dual cafe and ice cream shop, which affords them the luxury of opening their store roughly four hours before any of the ice cream competition does. This is four more hours of ice cream sales for the business, as well as morning ice cream consumption for humans in the Twin City region. As Sebastian Joe’s isn’t too far from the local university, college students from all over can live out childhood fantasies of eating ice cream for breakfast, and not having a single person bat an eye. I truly love this aspect of Sebastian Joe’s and before I even order, I have a positive light of them in my head.

As for my selection choice, I went with Roasted Plum Black Pepper Sorbet. I think sorbets may be the way to go first thing in the morning. It’s light, it won’t sit heavy in your stomach, and it has enough sugar to give you the boost in morning energy. If you need to poop, then perhaps you should go with the affogato (affogatos are pretty much just coffee and ice cream).

Anyways, I really enjoyed the unusual aspect of the flavor as it has 2 parts working in it- plum and pepper.

The first being the plum. It’s sweet, fruity, and it has a plum jam-like taste to it, so it’s sweet, but has the flavor intensity that comes about from preserving the flesh of the fruit, which gives it a surge in flavor. Overall it’s a delight. Part one of the flavor profile, complete.

The second part consists of the pepper and how it interacts with the plum. This is interesting because the sweetness is juxtaposed next to a the spice from the black pepper, creating an interesting fruity spice element, similar to some mango hot sauces out there. It doesn’t come immediately, but is more of a creeper that came towards the end of the second bite, and remained afterwards. It’s not super spicy by any means, but like most spices, the heat compounds the more you eat it. So there’s a progression that goes likes this:

Bite 1: Where’s the pepper? I don’t even taste it.

Bite 2: (Taken immediately after because you want to make sure there’s spice): I STILL DON’T TASTE ANY- Oh.. There it is. D’aww that’s cute. A baby spice.

Bite 3: I like this! It’s flavorful, and contrasts the sweetness beautifully.

Bite 5: It’s interesting… I mean, compared to where it started where I didn’t taste anything… how much hotter is this going to go?

Bite 6: Ok, I think it’s capped here- nope, I just bit into a pepper flake that is now caught in my throat. This just got hotter.

Bite 7: Ok, it does cap out, this heat has invigorated my body! I kinda feel like jumping up and tackling the morning. I’m awake, alert, and all around awesome at the moment. I’m not sweating from the heat, but it definitely has given me some extra oomph that isn’t in many of the other chili chocolates/spicy ice creams.

As far as the texture goes, like most sorbets, it’s a bit icier, but there are pieces of pulp and pepper flakes mixed in. It doesn’t feel super creamy, and to some this might be a slight turn off, but in my opinion, the flavor more than makes up for it.

Overall, this we as nice flavor to wake me up in the morning, and it was an interesting combination I had not had before.

Let me know about your sorbets!

Even though I’d say the majority of flavors I try are ice creams, I mess around with sorbets from time to time as well. Let me know about your sorbet, and I’ll give it a go. Send me a message on my contact page and I’ll take a look into acquiring said flavor for review!