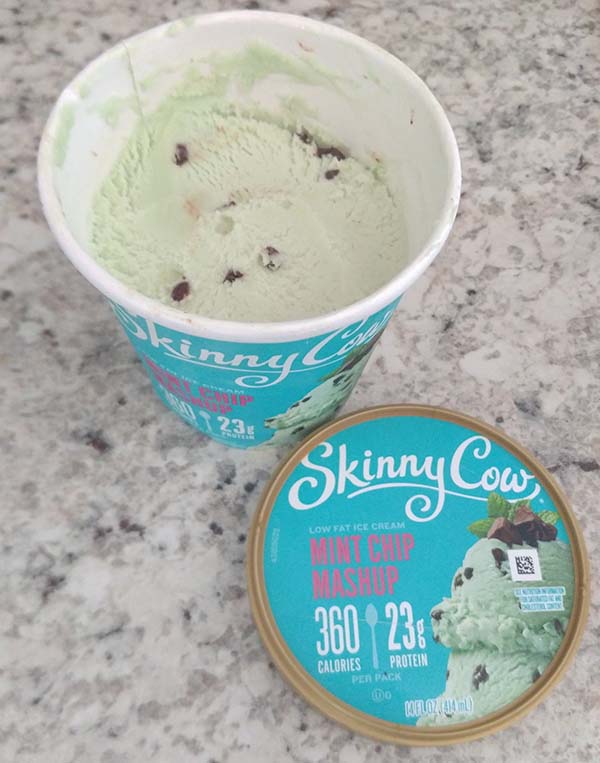 Skinny Cow is one of the newest in a line of health centered desserts that contain fewer calories and higher amounts of protien. A standard serving of ice cream is around 300 calories with ~5 grams of protein and is 1/2 cup in volume. Skinny Cow realizes that the standard consumer of ice cream won’t just stop at the 1/2 cup, but may possibly (very likely in my case) eat the whole pint at once. So while there may still be 5-6 grams of protein per 1/2 cup serving, it’s advertised as eating the whole thing at once to get the full 23g of protein all at once. And as there’s 360 calories in each container, it’s really not many more calories than a standard heavy ice cream like cookie dough caramel and fudge.

I’ll be honest. This ice cream has a chalky mint base with very little chocolate. I mean, even in the picture, there really wasn’t that many chocolate chips, so when eating, it was hard to get chocolate within every two bites.

Furthermore, there’s about 10% less mint flavor than an normal mint chocolate chip. If the flavor impact of a fresh mint leaf is an 11, then peppermint bark is like an 8, and a regular mint chocolate chip ice cream is closer to a 7. So, if the mintiness of a mjoito is closer to a 4, then this Mint Chip Mashup ice cream would be somewhere between a 5.5 and 6. It is mint, but it just feels a little bit downplayed because 1) there are fewer calories, and 2) the added protein.

Don’t get me wrong, I love the fact that I don’t feel guilty eating the entire thing, and I love that I can rationalize this food as a pre-gym protein boost, but it really does impact the flavor profile.

Now we get into the consistency and hardness. If anyone has ever tried a vegan or low calorie ice cream before, there is a good chance that you already know abou the consistency. It’s pretty darn hard. This is certainly one of those ‘open and let sit for a bit before eating’ types of ice creams. It will be tough to penetrate in at first, but with a bit of patience and a good ambient room temperature, you’ll be able to scoop from the outside in after around 4-5 minutes.

Well you have to think for a second. Who is this for exactly?

For starters, there’s the bros who need to pack as much protein as possible into their diet. They love ice cream, but wish they could get their swole on while eating this delicious dessert.

It’s also for those who want a lower calorie alternative to ice cream. If ice cream is a guilty pleasure, they don’t want to feel even worse about tackling an entire pint. So they can do that with Skinny Cow, and they don’t feel any remorse whatsoever about indulging.

The two groups above will love this ice cream.

But is this for mint lovers and ice cream afficianados? No. The taste is only so-so, because there isn’t a strong mint flavor and it feels like it’s missing a lot of chocolate chips. It’s also a bit harder consistency wise, so you likely won’t be scooping into it the second you open it from the freezer.

All in all, I’ll give it a pass with the benefit of the doubt, but it won’t rock your world in any flavor competitions.

If you want to try Mint Chip Mashup for yourself, you’ll need to find out if there’s a Skinny Cow at your local grocery store. You can check for that here.