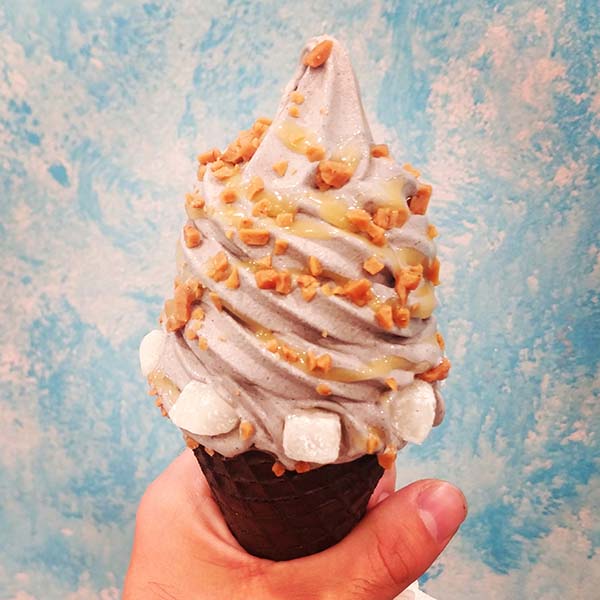 One of the fun, hip, and trendy ice cream places to be in NYC is Soft Swerve.

Before I even go into the ice cream, I want to take a second to talk about the thought put into this establishment’s design and ambiance. The interior is painted in this white/powder blue coloring that either gives off the appearance of peaceful clouds or crashing waves. The lighting is excellent, and surrounds your cone from every direction, making it virtually impossible to take a bad picture of your ice cream. Even EDM music plays in the background, at which point I began to wonder, am I actually even in an ice cream shop?

In my semi confused daze, I look to their signature flavors and order to interesting Brooklyn Bridge that was said to be one of the their top flavors.

This creation is said to be among the most popular, and consists of a black sesame soft serve base, a caramel drizzle, toffee bits strewn across the surface, and finished with the mochi pellets intricately lining the rim of the cone.

Holding this in front of that blue backdrop, for a second, everything seems to fade away and I marvel at this creation realizing just how beautiful it all is. The toffee bits look like little gold nuggets popping out of the grey cream exterior. The caramel is like garland wrapping around a Christmas tree. Somehow the whole thing feels modernly chic, yet festive at the same time.

Suddenly a small drip of the cream melts down the side of the cone and touches my hand, and immediately I come reeling back to reality. I know I have to eat this fast, as the soft serve will only hold up for so long. And with a moment of serendipitous timing, the beat drops on the EDM soundtrack that’s going on in the back ground, and I go to town on this cone. Engorging on this thing while still trying to recognize the flavors, I furiously lick and write to beat that is just bumpin’ in my heart and hand.

The black sesame gives off a roasted nutty taste that is not so different from the shave ice ice cream I had back at Snowflake Shavery in Las Vegas. It’s light, and is a great contrast from what is usually found in ice cream. Then there’s the caramel drizzle. I love this because it helps to balance out the less than sweet nature of the sesame, but sadly, this sweetness is fleeting. Just like the mochi pellets and toffee bits, these are around for a split second of sweet contrast, only to be lost the second you move past the surface… and that’s when it hit me. Just what the meaning of this ice cream is.

Fleeting. It’s almost like everything about this place is fleeting. This garland Christmas tree cone will be tossed aside after it’s use from the winter holidays. The sweet contrasting taste to the nutty base will only fill out momentarily before going away with your next lick. The great soft serve consistency flees the fastest, forcing you to continually lick the outside so it doesn’t revert to cream in your hands. Hell, even the song that I’m eating this ice cream to is fleeting as it’s only around for a few minutes before fading away into another track. Somehow this is simultaneously beautiful and depressing, and I’m not sure how I feel about it symbolically…. Hmm, I’ll have to think on that one.

But what about the taste?!? What does all that mumbo jumbo mean in terms of delicious vs. disgusting?

Oh yeah. In all honesty, that’s kind of meh. I loved the sweet savory contrast of caramel and nut, but that goes away pretty fast, and it’s mostly just a light watered down sesame feeling. The mochi pellets are barely even noticeable, and provide small bumps of sugar and a different texture, but do little to change the overall flavor composition. It’s not bad, but keep in mind, this cone is probably more for the social media likes than the actual taste.

It looks better than it tastes. Black sesame is a nice when it’s contrasting the sweet toppings like toffee, caramel, or mochi, but those all go away so fast, it ends up just focusing more on the “ok” black sesame. Furthermore, the whole thing melts pretty quickly, so if you aren’t on top of your eating game, there is a possibility that more will end up in your hand than in your mouth. I still think it’s an aesthetically pleasing creation, but keep in mind this is the place to go to when you care more about the quality of your social media shot, than the quality of flavor entering your mouth.

If you’re looking to try this Instagramable AF dessert shop for yourself, you can find them at: 85B Allen St, New York, NY 10002.

Think I Was Too Salty There?

Well, it was a nut base flavor. Either way, if you think I was off base in my review, let me know either in the comments, or you can leave me a message on my contact page. Either way, I’d be happy to chat with you about my thought process and why I said what I think.