Ice Cream After a Long Hike in Utah 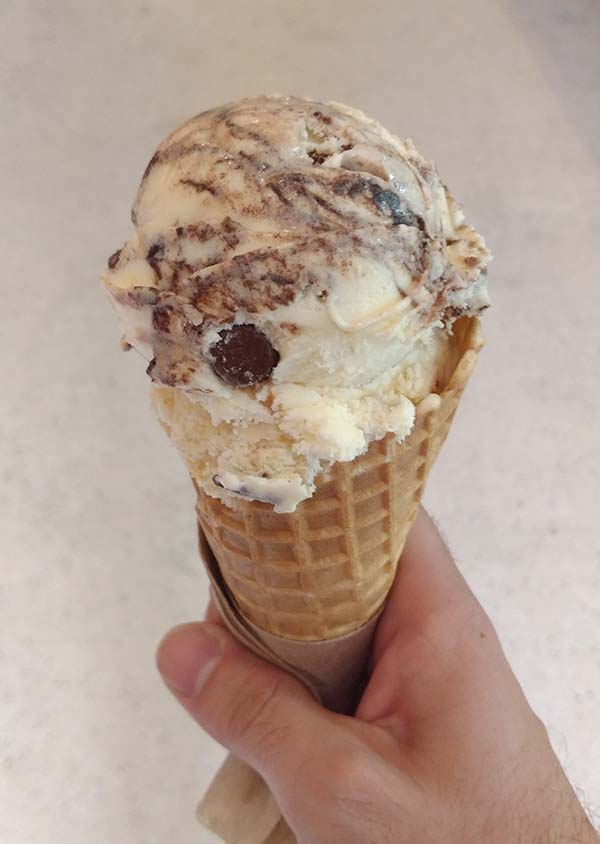 For some of the outdoorsy enthusiast types, you maybe wondering why Springdale sounds familiar. Well Springdale is the small town right outside Zion National Park. So after a long day of adventuring and appreciating nature’s beauty, there is a good chance you’ll stop off in Springdale for a quick rest before heading out.

After an exhaustingly long day trudging through the desert- sun beating down, beads of sweat rolling down your brow, and a pool of dampness forming on your back where your backpack was pressing shirt to skin, what is better than a cool cup/cone of ice cream? Nothing! I may be a little biased here, but ice cream is so refreshing at this point, that the taste level goes up at least two to three points. Now with that said, give me a hot second to tell you about the Springdale Candy Company before stomping into their Moose Tracks ice cream flavor.

This ice cream/candy shop is found on the Zion – Mount Caramel Highway in the town of Springdale. The owner is a friendly and pleasant man, who does partake in some small ice cream tinkering here and there, but for the most part uses Farr Better Premium Ice Cream. For tinkering, the owner will make one tub of homemade ice cream each week or so, and when he runs out, he’s out. No more ice cream of that flavor and you’ll have to wait to see what experimental flavor he brings about next. Sadly this was the case when I arrived. No original ice cream. And because I didn’t want to leave empty handed, I went with one of the Farr Better ice creams (which can be found in the freezer section of many grocery stores around the country), regardless of how much I was looking forward to a creation of his own doing. So now I’ll move onto the moose tracks.

First off, with the handicap:

After a long day’s hike in what feels like the devil’s armpit, ice cream cannot come fast enough. It’s cool and firm, but not immensely so. Its temperature is as low as you can get before it begins to turn the ice cream into a frozen, inedible block. In other words, I’m getting the maximum allotment of cool entering my mouth, at a rate I can engorge vigorously, without damaging my teeth or slowing down.

At its core the flavor is a candy bar combination of Snickers, peanut butter cups, and a chocolate swirl mixed in. As I taste these together it becomes apparent how close I came to dying out in the desert (mostly dehydrating), and moisture starts to take form in my eyes. I describe this as a candy power combo that doesn’t over add candies. There is still an ample amount of actual ice cream, instead of just throwing in mix-ins for the sake of adding candy bars to a point where the ice cream is merely a glue to hold the candy blob together. It’s mostly a vanilla with milk chocolate combo, and then sporadically, there will be blips of caramel or peanut butter thrown in to shake things up and keep you guessing. It’s a simple and fun flavor, that does well to not overpower the ice cream with loads of candy.

All the while, I’m just thankful this ice cream exists to keep me alive.

It’s a pretty decent ice cream, but you have to remember, this ice cream can be found at hundreds, if not thousands of grocery stores in the region, and even more nationally. As a result, it feels like it’s missing something- love. The love a shop owner who worked tirelessly (possibly) to recreate their own version of this flavor.

The ice cream definitely is firmer, and has a consistency like that of a Baskin-Robbins. This means it can certainly hold it’s own with other well known brands, but it does lack some of the richness, creaminess, or flavor density of some other mom and pop ice cream shops.

As I stated before, Springdale Candy Company is fantastic when you consider how refreshing it is with the hunger handicap. However, if you were to do a blind, Pepsi/Coke challenge with another ice cream parlor doing the same flavor, it is likely you might choose the latter. The taste is perfectly fine, but I can’t in good conscience recommend you drive or fly clear across the country just for this ice cream, especially when you can easily find it locally in a grocery store. However, if you do happen to wander into Zion National Park, coming here afterwards may be one of the greatest decisions you make that day.

If you’re ever headed to Zion National Park and have a hankering for ice cream, Springdale Candy Co. is located at: 855 Zion Park Boulevard, Springdale, UT 84767.

Read Some Other Reviews!