An Older Review From an Uncouth King 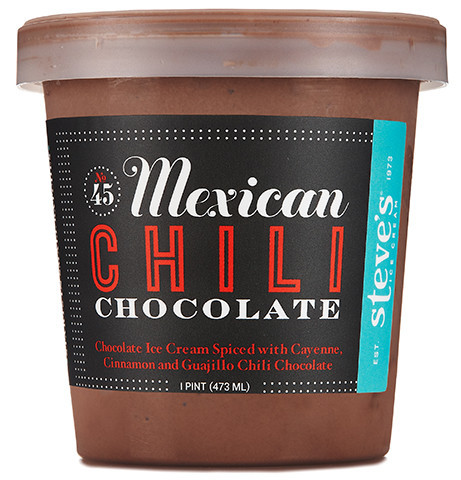 This is a little throwback (that’s not on a Thursday) to when I encountered Mexican Chocolate for the very first time.

It was at a Sprouts in South Torrance where I first encountered this flavor (and for those wondering what Sprouts is, imagine a grocery store that’s in between a Trader Joe’s and a Whole Foods Market). It was the Summer of 2012 and while working on expanding my ice cream horizons, I wandered down the frozen desserts isle only to come upon a long list of up and coming ice creams I had never seen before. Struck by the beauty of all the flavors and their names, I began reading the names of flavors and the ingredients that composed them. But behind all the beautiful pints, there was one that grabbed my attention because it wasn’t. This flavor was number 45 of Steve’s Ice Cream, Mexican Chili Chocolate.

My initial reaction to seeing this flavor in the grocery store was one of disgust, shock, yet an unyielding curiosity. Was this really going to taste like chocolate mixed with some canned chili? What kind of mad scientist would try to play god and create a flavor so abysmally horrendous?! I’d never heard of such a wild thing in all my years of eating ice cream, and while I instantly wanted to put it back, another thought crossed my mind.

“Shit, as the ‘self-proclaimed Ice Cream King’ I know I’ll have to face this flavor one way or another. Otherwise, how else can I call myself a true king?”

Remember that feeling of utter disgust I mentioned earlier? Well, after I took a bite, I realized that a grave misunderstanding had taken place. Chili chocolate has nothing to do with the white people chili with beans like my idiotic uncultured ass had initially anticipated.

Instead of meat and beans, after the first bite I only tasted one thing. Chocolate. And not just any chocolate but dark chocolate. It was deep, and richer beyond where most chocolate ice creams even dream of. It wasn’t extremely bitter, but it was heavy. The initial taste was like running into a brick wall head first. It’s like going from the bright of day to the dark of night. Blind. But then after a second, I managed to adapt to the darkness, and navigate past this initial overwhelming dark chocolate taste.

After swallowing that first bite, I began to feel something. A mild sensation that I had completely forgotten about. Yes, it was the spice of the chili that was now affecting my palate. It had been well over three seconds since swallowing, but I began to taste it now. This delayed time bomb was something that I hadn’t expected.

The idea of spiciness in an ice cream is such an unusual concept because normally I would imagine eating an ice cream to get rid of the spicy taste in my mouth (as I have done in the past). In this scenario though, I would eat ice cream, only to experience more spice. It’s an unusual feeling to experience coldness on your tongue, but heat in your throat. One that I will not soon forget.

Overall, I wouldn’t call this a great ice cream, but it was certainly unusual and not what I had expected. The dark chocolate was a little much to handle, and I rather prefer to eat ice cream to sedate a spice, not spur its ignition. That being said, the creative combination of spice and its antithesis was really something I can respect. So good job Steve’s for your ability to think outside the ice cream carton.

If you want to try out Steve’s Mexican Chili Chocolate for yourself, you can search your local high end grocery store like Sprouts, or just order it online from Amazon or Instacart.