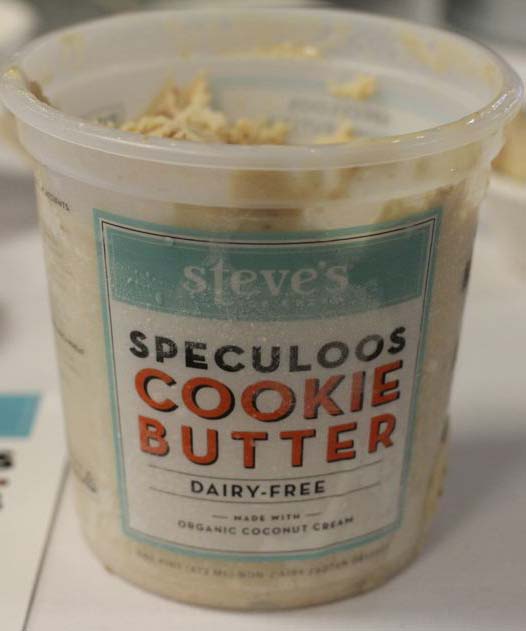 Believe it or not, this flavor is actually a dairy free ice cream. Gasp!

Don’t worry though, Steve’s has a solid tradition of fine ice creams, so before you even think about backing out of this review, let me quell your fears. Steve’s will do this flavor justice.

And besides, regardless of what you think of vegan ice creams, it is important to give them a fair shake and at least try them before passing judgement. As the King of Ice Cream, I accept all my subjects, regardless of ingrediental ancestry. So with a spoon in hand, I dig into this frozen dessert with the vigor it deserves.

**This report is from a few years back and was actually the very first time I had experienced anything with cookie butter in it.

For the uninformed, cookie butter is certain a trend that has been cropping up in the past few years- especially with the rise of rolled ice creams and liquid nitrogen made to order ice cream shops. As an ingredient, cookie butter is often seen in Trader Joes, and will be presented as a cookie dough substitute, even though the two lack any similarity in taste. Is it delcious? Absolutely. But do not be fooled when people tell you it’s the same thing as cookie dough.

In terms of the cookie butter flavor here, I’ll note that this was the first time I had encountered this type of ingredient, so I’ll do my best in walking you through flavor profile and all its nuances. Through a strange digression of thought, each bite constructed a new image of what I was tasting. Bite one: while thinking about the name Speculoos, the cinnamon punch reminded me of Dunkaroos. Bite 2: After realizing Dunkaroos were often overpowered by the frosting, I realized this might be closer to cinnamon teddy grahams. Bite 3: the teddy graham tid-bits in the ice cream are soft and uncooked, much like my great grandmother’s gingersnap cookie dough recipe. On and on, each bite took me to another random thought or memory, often many times in circles. Regardless of wherever my thoughts took me, a few things were certain. The coconut cream was actually a great base, and did not overpower the cinnamon in any way. The cinnamon was strong, but not ungodly so (like a different cinnamon challenge I will neither confirm nor deny trying). Lastly, at the end of this pint, I didn’t even care that there was no dairy, because the amount of joy and happiness received was on par with many ice cream pints I’ve consumed over the years.

In terms of flavor flaws, I’d say the critiques are less with the flavor and more with the texture. Due to the lack of dairy used, it does tend to freeze a little bit differently. After a couple of days in a standard freezer it won’t be as soft as a traditional ice cream and often times it’s tougher to spoon through. The texture can also sometimes be a little bit icier, so it’s important ot either let the pint soften up for a minute or two before eating, or, just down the whole thing in one go after you get home from the grocery store. I have an inkling feeling you can guess which approach I took here. And that one thing was it in terms of flaws.

Is this the pinnacle representation of cookie dough? No. Is it still scrum-diddly-umptious? You’re damn right it is. It’s also dairy free so those with intollerance towards the moo-juice and other moo products can eat this safely with no repercussions. While it might not be a perfect replica of ice cream, it is certainly delicious in its own right, and there is certainly a time and a place for a dessert like this in my freezer.

I’ve had my fair share of dairy free ice creams, and serveral of them fell short of Steve’s. That said, I’m always willing to keep an open mind and would love it if you send me your suggestions in the comments below or by leaving me a message on my contact page. I hope to hear your suggestions soon!