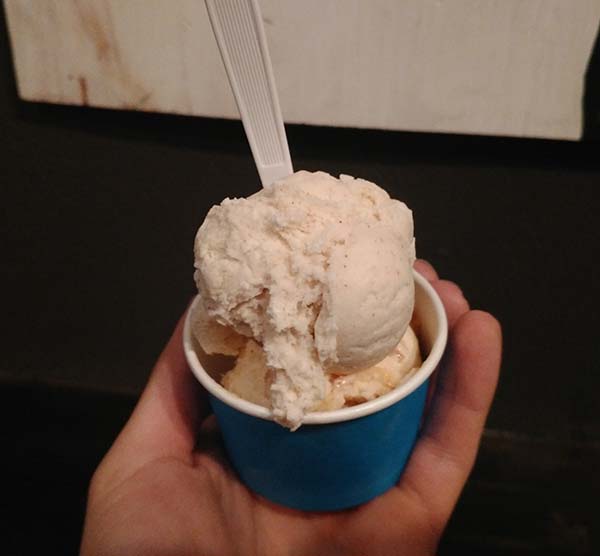 In Missoula’s “bustling” downtown (I use bustling as a relative term, as I am sure what most people would call a quaint suburbia feel, Montanans call bustling), you can find a surprisingly large young crowd of college kids hanging out at the local ice cream shop on a Friday night. Pretty solid music is bumping, the interior looks chic with a bit of urban swagger, and some awesome cow related wall art is scattered around the joint. All in all, a decent spot to chill.

As for the ice cream combination of the Benny Up and Honey Cinnamon, it’s pretty much the perfect Cinnabon. It’s flavor profile is creamy and delicious where every ingredient (icing, cinnamon, pecans, and other fatty goodness) is brought to the next level with the inclusion of honey. In addition, the heavy starch that is normally found in this mall/airport confection, is replaced with an equally delicious, but less filling sweet potato base. What’s more though, is since there are multiple sizes, I can order a small OR medium, eat it all, and I won’t feel like a fat piece of shit afterwards. DO YOU REALIZE HOW AMAZING THAT IS? This seriously elevates the eating experience to a point of satisfaction without crossing the fullness line into shame eating. This means bad days can be made better with from this obviously delicious, but less filling dessert. And when you wake up the next day, do you know what you’ll feel? Happy! Not disgust in yourself, but happiness. Happiness that came from a simple pleasure, which helped to alleviate a bad situation during a time of need.

This combination does such a good Cinnabon, that this presents me with an interesting chicken or the egg dilemma. In that I mean, which version is better? Is it this new, creamy, and literally cool way to eat a Cinnabon? Or would this new way be useless without the emotions and feelings evoked from the original heavy mall/airport Cinnabon? Arg! I don’t know… Like for reals, I seriously don’t know which one is better…

Well while I think about that some more, let me walk you through the flavors individually, even though talking about the combination first is kind of like putting the cart before the horse.

Named after a local hero/firefighter, the Benny Up is probably what’s closer to the actual Cinnabon taste right off the bat. It’s a caramelized sweet potato with icing and pecans mixed in. It may lack intense cinnamon flavor, but fear not, for I thought of this already. This is where the Honey Cinnamon comes in.

The Honey Cinnamon, is pretty much exactly what it’s name states. The cinnamon comes in as an obvious apparent flavor without taking over the entire thing. It works well with the honey, and the sweetness that comes from this just tastes natural- no artificial flavoring whatsoever; which is something that I notice people are attracted to in today’s day and age(myself included).

I GOT IT! I figured out which one is better. I’m going to say they both win in different categories. Political answer, I know, but at least I’ll explain why. For nostalgia, and for providing context, the original Cinnabon wins. What this means is, if you are between the ages of 6-12 and haven’t had a Cinnabon yet, go for the original warm, fatty goodness first. This will introduce the flavor to you, and you can appreciate it for what it is, as well as the greater heights of those who build upon it later.

On the other hand, for just straight flavor, my Benny Up + Honey Cinnamon flavor combo from Sweet Peaks is definitely the winner. It takes what is already here (the Cinnabon), and elevates it to the next level with ice cream goodness and honey. Furthermore, the portions won’t leave you feeling too heavy. This is a quality that is hard to understate. Because when you order a Cinnabon, I feel like a quitter unless I eat the whole thing. I’M NOT A DAMN QUITTER! So I end up eating the whole thing and then skipping the next three meals by shortly hibernating instead. Here, I was able to eat my ice cream, AND, wake up the next day for a healthy-ish breakfast!

Overall, I was very pleased with my ice cream choice here, especially after my prideful fall eating at The Big Dipper, earlier that day. If you do come here, please try my creation, and let me know how close or off the mark my description is!