From one of San Fran’s Oldest Ice Cream Shops 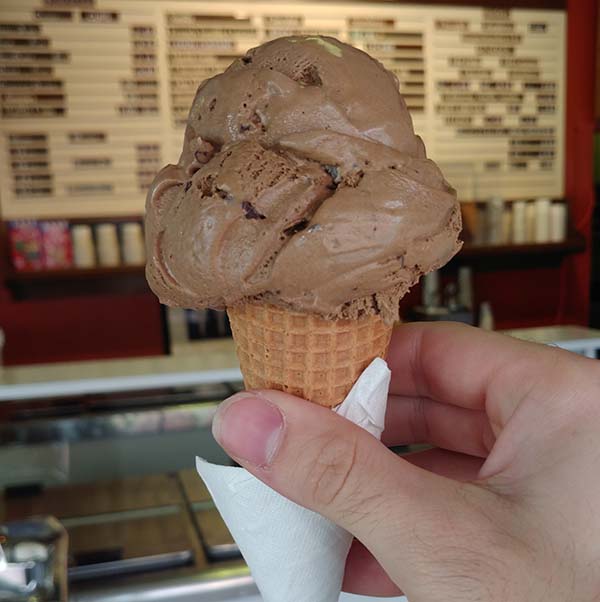 Atop one of the highest hills in the whole city, when walking this city, this ice cream shop is not for the faint of heart. It can definitely be a trek to get there, but once you do, the reward for accomplishing this quest is great. Yes, I’m talking about soft, cold, melty ice cream that’s to be sloppily eaten and engorged upon with an unrelenting vigor. Unlike the other ice cream shops around the city, Swensen’s doesn’t have too many unusual flavors, but mostly just focuses on traditional flavors and tries to keep the quality of these select few flavors creamy, and delicious.

The flavor I devoured was the Swiss Orange Chip flavor, as it’s one of the few unique flavors offered, and to me it sounded interesting. I mean, there aren’t too many chocolate orange flavors out there, and while it’s not unheard of, it certainly isn’t the normal either.

Eating it, I was rather surprised for two reasons. First was the flavor of the ice cream, and the second was the consistency. The flavor kind of hits you in waves. First there’s the Swiss chocolate, followed by a lighter orange finish, and if the bite has a chocolate chip in it, then there was a small snap of concentrated chocolate. And much like any other chip flavor (chocolate chip, mint chip, etc.) it only lingers a little bit longer, and will continue to be present into the next bite.

Now as for the consistency, as I mentioned before, it’s a little melty and softer. And while it wasn’t soupy melty, it was definitely melting fairly fast when eating it (which was like 50 degree weather by the way). Because of this, eating it reminded me of a lot of older movies that featured old timey ice cream shops. You know the ones where the children have ice cream all over their face, and you think to yourself, “Dear Lord child! Show some modicum of manners and try to get more of the ice cream in your mouth as opposed to the rest of your face.” I totally thought this was more of a Hollywood trope to make the child seem adorable. In reality, and specifically at Swensen’s, this actually happens- and specifically to me. Chocolate was all up in my business as I tried to engulf it. spots on my nose, drips on my clothes, and an ample amount all over my cheeks. Luckily for the last one, my beard was able to cover up most of this, but upon entering a bathroom next, I was able to see the extent of the damage this single cone could cause. And no, I will not share the photographic evidence of this, just because my hair was not at its best at the time.

While definitely a nostalgic throwback to my younger days of sloppy eating, I can only imagine how it can get in the summer. Melting faster, messier, and as the chocolate sticks to your face in the summer heat, the uncomfortable stickiness that results can be a bit of a downside. That said, I didn’t eat it in the summer, so I’m totally speculating here.

Overall, it’s a delicious flavor and combines chocolate with an orange zest- something that isn’t extremely common ice cream shops. It does have a little bit of a quick-melting, messy attribute to it, but that doesn’t mean you shouldn’t order it. Simply beware when eating.

If you want to try this San Francisco ice cream legend yourself, Swensen’s can be found at: 1999 Hyde St, San Francisco, CA 94109.

Shops like Swensen’s are a part of ice cream’s history, and I always like to go to some of these long standing establishments if for no other reason than to pay my respects. For it’s the result of the path these places managed to pave that we can have the world of ice cream as it is today. And the fact that they are still in business is a testament to their greatness- be it in ice cream quality, customer service, or the sentimental value these places manage to conjure with each individual scoop. So let me know about your favorite old timey ice cream parlor by sending me a message on my contact page, and I’ll try to get around to tasting something there!