“ALL YOU CAN EAT ICE CREAM.” These were the words that a friend told me, which got me to plan a portion of my cross country ice cream journey around. I mean, who could pass up any event that has all you can eat ice cream? Not this guy. I’m sure they weren’t expecting me to actually make it, and in some ways saw it as a challenge. So with this unspoken gauntlet thrown down, I headed over to the Big Apple to see what this Scooper Bowl was all about.

For those who might not be as familiar with the concept, the Scooper Bowl has only been in New York starting this year. Traditionally in Boston, this newly adopted event hosts both local and national ice cream brands as they come together and offer unlimited ice cream during the day for three consecutive days at a local park. The money from admission tickets can go to the Jimmy Fund, which works in tandem with the Dana Farber Cancer Institute, to help advance research, and assist both children and adult patients alike with their cancer treatment.

At the Scooper Bowl

Walking into the Scooper Bowl, I knew I’d be hitting up all the stands, and most likely every flavor too. With this as my guiding light, I just decided to jump head first without really looking, and head to the first booth I saw.

First up was Unreal Milk Chocolate. Pretty much a faux, “healthier” M&M. Not exactly the iciest of creams, and is only related to diary because it’s a milk chocolate, but whatever. I wasn’t about to go back on the decision I made ten seconds prior and skip a booth. So I smile politely and take a piece of candy. It’s alright, but M&Ms are still king, and I don’t think this will be dethroning them anytime soon.

Next up was Vice Cream. Nice, a real ice cream booth. I start pound each of the 2.5 oz samples and tackle three of them right off the bat. Minted, Bourbon Mash, and Afternoon delight are gone in a matter of seconds. I don’t even take time to note the individual flavors of each. At this point I’m going Hulk mode, smashing this event with every step I take. Lost in the- I’m not sure if it was ecstasy or fear of missing out- but whatever emotion, I was compelled to eat, talk as little as possible, and move on.

Next was Baskin-Robbins- basic, I know. So I take the Love Potion 31 and Golden Oreo ‘N Churro, engulf these two, and head to the next.

Häagen-Dazs. These weren’t in the cute little clear sample cups, but the mini pre-packaged cups that you can find at a local grocery store. Damn, Häagen-Dazs already knows the perfect amount for a sample, and doesn’t mess around when it comes to their promotions. Here I take a salted caramel cone, and move on. Theirs are probably closer to 4 oz, so by now I’m a little over a pint of ice cream. I still have the best places to go to still. I need to slow down.

Next up was Ben and Jerry’s. Another classic, and hey, I hear they brought one of their newest flavors- Bob Marley One Love- which is like a banana foster-esque pie/cheesecake/something… Wow, my head is getting a little fuzzy and my tongue is starting to mix in some of the other flavors. It’s only been like 15 minutes, maybe I really should’ve slowed down.

Breyer’s- Dammit, I still have like half the flavors to go. I don’t wanna waste valuable stomach space on the brand whose flavors I know backwards and forwards. I want to try new things! And back in the day, my household bought ice cream exclusively from this brand as a child. As much as it pains me, I’m going to go back on the decision I made earlier and skip this booth, just to save space for the others. Maybe I’ll come back to it later (I totally didn’t though).

Brooklyn Ice Cream Factory. Ooooo, I haven’t tried your brand yet (or even heard of it for that matter). Nice! Something new. What’s more though, is here they serve their ice cream in cute little mini cones. Awww, you guys are adorable. I go for the tiny double fist- Cherry Chocolate Chunk and Pistachio. Fantastic. I can’t quite draw out the peculiar sensations here due to all the other ice creams, but I can tell they produce a quality cream. Also, these are closer to 1.5 oz, so I can eat more of these without feeling full. Beautiful! 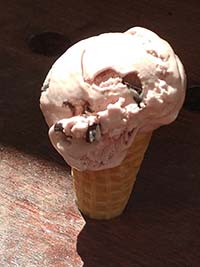 Finally, the last one here at the moment was Big Gay Ice Cream. This ice cream shop is famous, even on the west coast, and easily the brand I was most excited to learn was here. So the fact that they are one of the last booths to try, I’m a little disappointed in myself for forgetting about this, and not seeking them out sooner, so I can get an actual review in. The flavors I try immediately are: Dorothy, Birfdae Cek, Blueberry Gobbler, and American Globs.

After going through round one I do a quick count. By my estimations, I’m somewhere around 2 pints- or a little under a quart. It’s been maybe 30 minutes. That’s when I see something out of the corner of my eye. An older gentleman with a small group of Ben & Jerry Staff huddled around him. It definitely took me a sec to put it together, but the moment I did, a single word question softly emanated from my awestruck face… “Jerry?”

Yes, it was the legendary ice cream creator Jerry Greenfield from Ben & Jerry’s. One half of the genius duo that helped to revolutionize the ice cream industry back in the late 70s. Creating what was seen as more unusual flavors, Ben & Jerry opened the floodgates which is what I believe allowed us to have the crazy ice cream creations of today (rolled ice cream, alcohol ice cream, savory flavors, etc.).

Star-struck, I nervously walk over to the man in the hopes that I can start up a conversation with this ice cream hero. As I loiter awkwardly and wait, one of the Ben & Jerry’s staff comes up to me and confirms my suspicions. This man is indeed Jerry Greenfield, and encourages me to talk to him, as Jerry is a giant sweetheart to his ice cream core.

As my turn finally arrives, I introduce myself, and describe my ice cream journey to the man. He listens patiently as I enthusiastically describe my cross country journey, and afterwards, we start shooting the shit. We talk about the ice creams here, the state of ice creams in the country and world, Ben & Jerry’s flavors of the past, and so much more. Towards the end though, he asks what I think of this event. I say, “All you can eat ice cream?! It’s fantastic!” He smiles and says yeah, but I could tell there was something he was holding back from saying…

Jerry left soon after, and I was told by his staff that Jerry doesn’t stick around for too long, as it can be exhausting having to deal with fans all day. Ugh, people. Am I right? I press a little further to wonder what reason he even has for coming to these events in the first place. The guy then tells me how Jerry doesn’t really come out to promotional events like these, unless they were for a good cause.

That’s when it hit me. Through all the ice creams I was eating, I was forgetting the reason these ice creams were even here in the first place. It was for the Jimmy Fund. To help patients with cancer. I had forgotten this somewhere along the way, and suddenly I felt a little bit ashamed. Jerry was asking me what I thought of using ice cream as a medium to bring about greater cancer awareness, I was completely blind to it. I only saw the ice cream. All the shops and creameries had donated these massive amounts of ice cream, without any profit to themselves, just so that people could pay for admission tickets whose proceeds would go to further cancer research or the helping families pay for ungodly expensive treatment.

Dammit, I know let you down Jerry.

Woah, that got heavy real fast. While the momentary melancholy did hit me pretty hard, I decided to regroup and double my efforts to take this event more seriously. After about 15 minutes of walking around to burn off the calories, I went back for round two. This time though, I went to each individual stand to learn more about their business, and learn what reason they had for participating in this event. The answers were astonishing, and I found out that many businesses have high level executives that have family and friends that are affected by cancer, and how they now proudly dedicate resources to ensure that people can be taken care of and spread the love even further.

It was super inspiring to hear all of this, and while I was eating during our conversations, I didn’t even notice a full feeling coming on. I was sure to hit up each stand once more (minus Breyer’s), and found out that Cool Haus would be replacing Big Gay Ice Cream in a little bit. So I was sure to try the rest of their flavors (Salty Pimp, Lunchbox, and Rocky Roadhouse), and then wait for the booth to change.

At this point, it’s like 4 o’clock and I run another tally to see how much ice cream I’ve eaten. Probably a little under a half gallon, and even conversation can’t stop me from feeling the fullness. I have literally eaten all I can eat, and once I get some Cool Haus, it’s time to head home.

This was a great event to promote Cancer awareness, even if I didn’t see it at first. I hope NYC continues to put on this event, and that perhaps it will be spread across the rest of the country as well (I’m looking at you LA, get on this!). It was an amazing experience, and I also know how much is all I can eat (slightly less than a half gallon over a two and a half hour time frame).

One final conclusion is that I realize there are many more things like this that I don’t even know about. So if you hear of crazy things like this, let me know. Send me a message on my contact page, and I’ll do what I can to experience it firsthand.