3 Ways to Be Delicious Brandished About in One Flavor 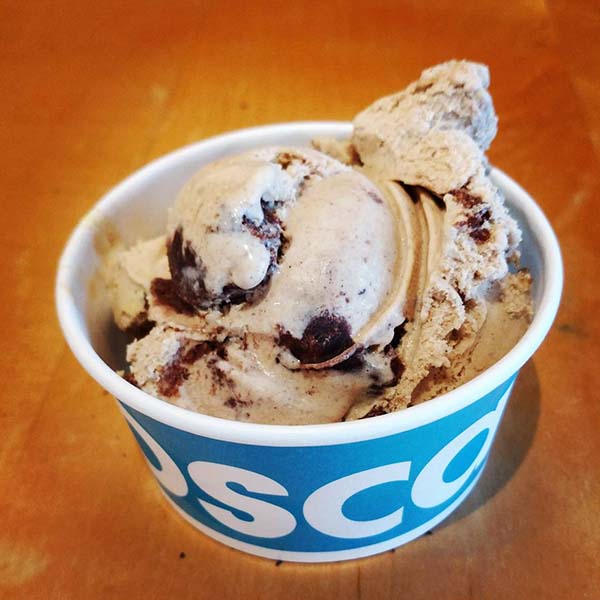 Going into Boston, there’s two shops that are on everyone’s lips. Toscanini’s and Christina’s. But mostly Toscanini’s. It’s a shop that’s trendy, and provides a light atmosphere that’s more like a coffee/coworking building than an ice cream shop. What’s better is the place provides ample samples that really allow you to taste a flavor in it’s full glory instead of guessing what it will be like in a full cup or cone.

Walking into this establishment, I ask the scooper, what’s the best flavor you got? And without hesitation he replied, the B3. Something about this dude’s confidence told me not to question him. I immediately ordered a cup.

By the bosom of Benjamin Button! A boistrously beloved bit of baking in ice cream becomes a bombing barrage of flavor beside a blizzard! Brown sugar, brown butter, and brownies are combined together in this creation in a way that is absolutley bananas (despite no produce actually being in this ice cream).

Like all the other New England shops reviews before this, the ice cream is rich, dense and heavy in a way that you love, but at the same time almost fear. All three elements are just so strong, that as you eat more, the strength of each element continually increases. At some point you almost have to wonder, how strong will this get?

Breaking down each element in this aforementioned flavor blizzard, first we start with the brown butter. It’s sweet, but has this nutty butter taste to it that balances and brings down the intense sweetness of the other two Bs well. This would be like the snowy base that is hard to dense and hard to move through, but still manageable. Moving into the brown sugar, this is another obviously sweet element, but this time the sweetness is countered a little bit by the rich molasses undertones that slightly come through in the whole creation. Becuase molasses can be a fairly in your face type of flavor, it is likened to the fast paced snow pelting your face. The brownie is the most obvious element, but because it’s only present in thick doughy chunks, they act as chocolate flavor bombs that continue the barage the body as you trudge through this flavor blizzard.

As the whole thing grows in intensity, each flavor is still present, but simply a louder version of its taste. What’s truly great about this ice cream is that no single area ends up over powering the other two, which can often be the case when strong flavors collide together. And while a bombing blizzard might not be the happiest metaphor for this ice cream, it’s certainly what comes to mind as I was devouring it (except, you know, maybe it’s more of a fun blizzard kind of thing).

The dude who recommended this was right. It’s a blizzard of fun. So get it. Go right now. I’ll pak the caa. You get the wicked good ice cream. No jimmies!

I’ll be honest, I only tried like two places while in Boston (Toscanini’s as one of them), because those were the only two in town that anyone said. So if you have a Boston ice cream shop recommendation, either leave a comment below or message me on my contact page. I’m stoked to go back and try some more!