My Trip to the Ice Cream Museum

(The one located in Los Angeles, Not New York) 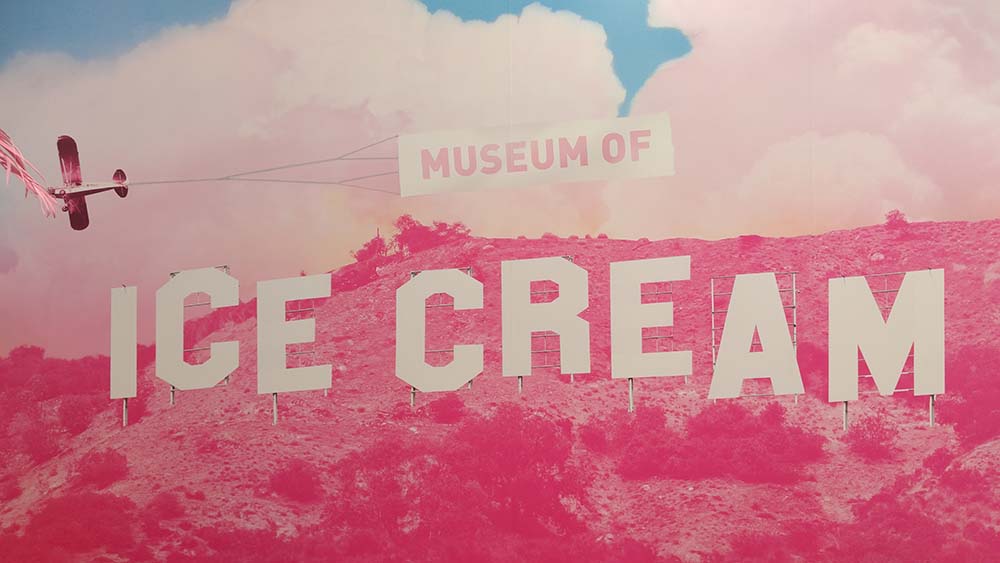 Now that the Los Angeles Ice Cream Museum has come to a close, I feel it’s appropriate to spill the secrets on this momentous exhibit. I’ll be walking through the entire museum from start to finish, and hopefully through the written word and a couple of choice photographs taken along the way, you too can understand what this pop up museum was all about.

“I scream, you scream, we all scream for ice cream!” This phrase was chanted by children and adults alike, both groups eagerly waiting their admittance into the ice cream museum. Maybe it was something about the vibrant pink buildings, or perhaps it was the sheer anticipation of this installation dedicated to delightful dairy desserts, but either way, the excitement was palpable, and I loved every moment of it.

Before I walk through the actual tour of the exhibit, I should note that this type of museum was not for everyone. If you are into museums like LACMA, The Getty, The Met, etc. this might leave you wanting. Instead of a large list of art installations, and works that deeply delve into an artists very soul, this museum is far more lighthearted, and Instagram-able (AF). With tons of art that you can actually touch, ice cream samples around corners, and photo ops which are highly encouraged, this temporary exhibit went from a two month installation and extended further across four calendar months! Tickets sold out at rates like Beyoncé concerts, and something that seemed like a small and cute exhibit, blew up into something much more.

Beyond the gimmicks, and picturesque art is something more though. There is an electricity through the air, and it took me about half a minute to realize what it was. It was the energy of “children” enveloping the entire building. And by children, I’m not just referring to people between the ages of 3-12. By surrounding yourself in this youthful energy, I witnessed young adult Millennials start the museum tour as dead inside and revive their child-like wonder to revert into this 3-12 year old category. It was this mob mentality constantly feeding on itself that is what’s truly special about this museum, and it’s the part that’s the hardest to understand without experiencing it firsthand. So even though I’ll do my best to describe the museum in its entirety, if you just understand this part above, then you’ve already experienced 80% of the museum, and can probably stop reading now.

Without further ado, here is the Ice Cream Museum in Los Angeles, CA.

Walking into the museum beyond the entry way, it starts with the a room filled with old timey wallphones. Picking up one, a gruff but friendly and familiar voice comes into my ear. He begins to go into the rules and regulations of the museum as the designated “ice cream fairy” while also rattling of an impressive list of ice cream facts. A few sentences in, and you realize, “Oh shit! This is Seth Rogen!” It’s at this point the voice goes, “By the way, the voice telling you this is the ice cream fairy. Definitely not Seth Rogen.” Ha! Well played, Ice Cream Museum writer. So maybe it wasn’t Seth Rogen, but whoever this person was, they put on a pretty decent opening sound track.

So at this point, I’m still listening because I like hearing the calming sound of Seth’s voice, but for the most of the room, they didn’t listen to the end and instead moved on.

Following in suit we go to the next room, and it’s filled with around 20 or so tiles of Hollywood stars that have been turned into ice cream puns. 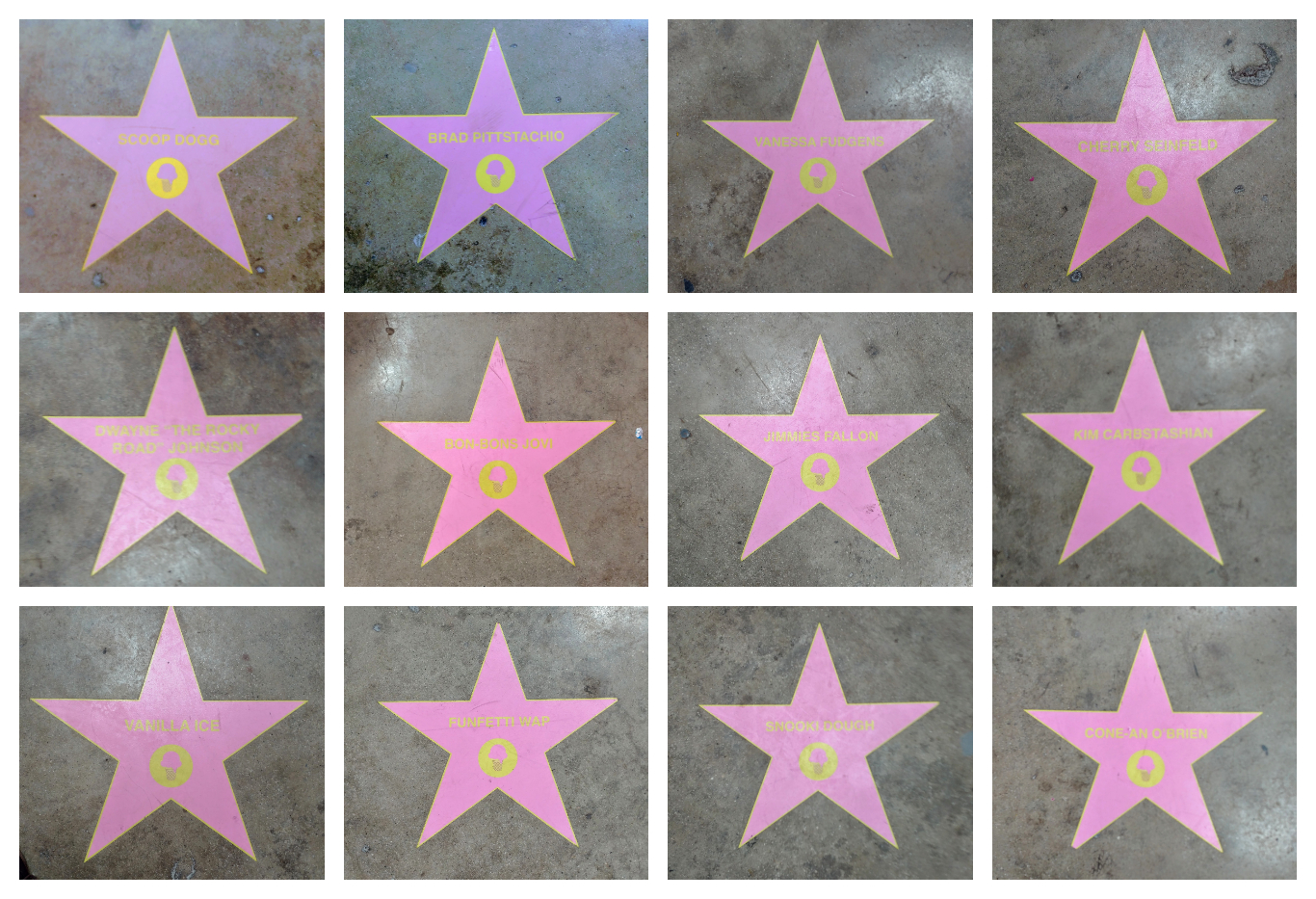 I got to say, their celebrity word play game is on point here… respect. (*raises a single fist)

Also here, McConnell’s was offering free samples of their Earl Grey Tea ice cream. It was no matcha green tea or thai tea, but it was still pretty solid. And hey, it was free! 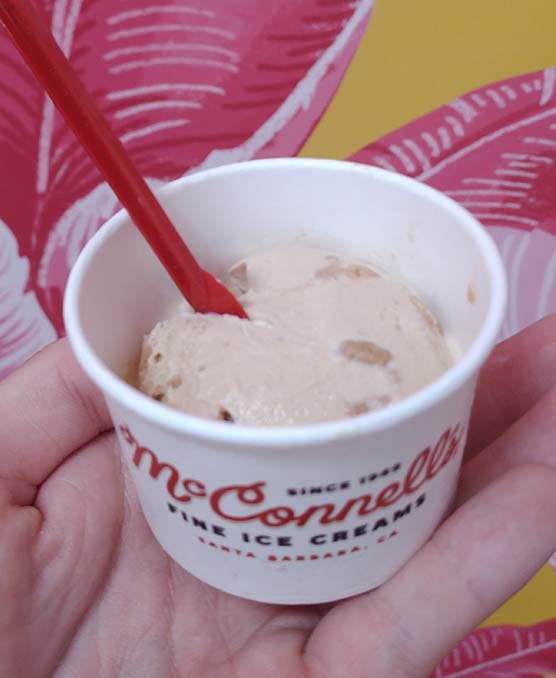 Going onto the next room, there’s a banana swing and dozens and dozens of bushels of bananas hang from the ceiling in yellow and pink. Not entirely sure what bananas have to do with ice cream aside from their appearance in banana splits, but whatevs, I trudge on. Yes, trudge. I’m not excited or filled by wonder at all (insert the heaviest of sarcasm)…

Next was the mint green room of sorts, where a docent was explaining about the history of mint chocolate, and discussed the museum’s attempt to cultivated a mint leave in cacao infused soil, with the hopes of creating a mint chocolate leaf. While listening, the offered us free samples of mint chocolate mochi ice cream, and asked us to whisper words of encouragemint (pun intended) to the budding leaves in the hopes of their success in this botanical endeavor. The even have mint chocolate mochi balls! I’m two for three in terms of samples per room. I’m really digging this museum.

Moving on to a colorful fun house mirror type room. I feel like they didn’t have much ice cream material here, so they put some sherbet words on the walls, and voila, now it’s ice cream related. No samples though, and my face  Moving on.

Next room was actually more of a hall, but it did have a beautiful installation wherein ridiculously large (fake) ice cream bars stuck out of the walls. Kids were jumping and crawling all over the thing, while some of the more basic beezy people took the photo ops next to the ice cream bars, pretending to lick the thing. I saw one girl get too close and actually touch the art with her tongue. That can’t be hygienic. Oh, and by the way, I was totally one of the basic people who stuck their tongue out.

The next room was the gummy bear room! Much like the bananas, this isn’t directly tied to ice cream, but seeing as how gummy bears are a candy as well as an ice cream topping, they can at least fall into the category of semi-related to ice cream and its museum. Gigantic sugary teddy bears were placed around the room, and located in the nearest corner was the vat of gummy bears offered as free samples. Hell’s Yeah! Looking back, the free samples are probably why I’m less critical of the gummy bears over the bananas.

Moving on. Next was the charcoal cookie dough in tiny ice cream cone samples were the first thing that caught my eye. Despite the loads of sugar I’m still rushing on from the gummy bears, I’m still amped and ready to continue this rush even further with some delicious soft cookie dough! I actually had to take a second mini cone, because I devoured my first one before I remembered to take a photo. It was just so soft and fluffy. It was closer to the nougat in a Three Musketeers Bar than traditional cookie dough. Either way, it was pretty damn delightful. 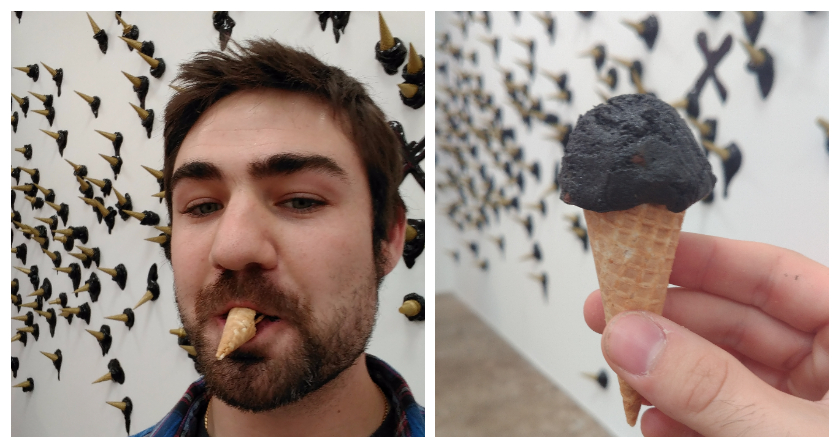 I was so jazzed about the cookie dough, that I completely didn’t even notice that actual art installation at first. Lowkey, I kind of feel like this should be in an action movie of some sorts (like a die hard movie), and somewhere during a fight scene, Bruce Willis slams some enemy’s face into these pointy ass cones, killing them, and raising the art to a whole other level. I mean, just think about it. What would it say about society’s borderline careless snack obsession, where deadly heart stopping snacks are literally spread haphazardly around rooms, waiting to kill unsuspecting victims at every turn? Damn… that’s some deep shit right there, not to mention, it looks dope as hell!

As we drew close to the final installation, this is the portion most people know about the ice cream museum, based on the many boomerangs, snaps, tweets, parascopes, and other social media devices. Yes, I am referring to the sprinkle pit. 100 million sprinkles litter a small indoor pool, with enough room. Some of you may be wondering… isn’t that super unsanitary? Why yes, it would be! IF it were real sugar sprinkles. These were plastic sprinkles.

So let me tell you about the good news and less than good news about the sprinkle pit. Less than good news, the little kids kind of hog all the space and don’t leave too much room for adults to play.  MOVE, YOUNG BLOOD! I’M TRYING TO RELEASE I’M INNER CHILD HERE! Luckily, upon further inspection, there is actually a decent amount of room, and I did manage to find a little spot to fail around in on my own, and act like a dog discovering a mud pit for the first time.

Earlier, did I say final installation? Perhaps I was a little too hasty. It might be the final installation the everyone knows about, but there was actually another important area as well. The final sample. This time, we’re talking about pink pancake ice cream sandwiches! Dope, right? 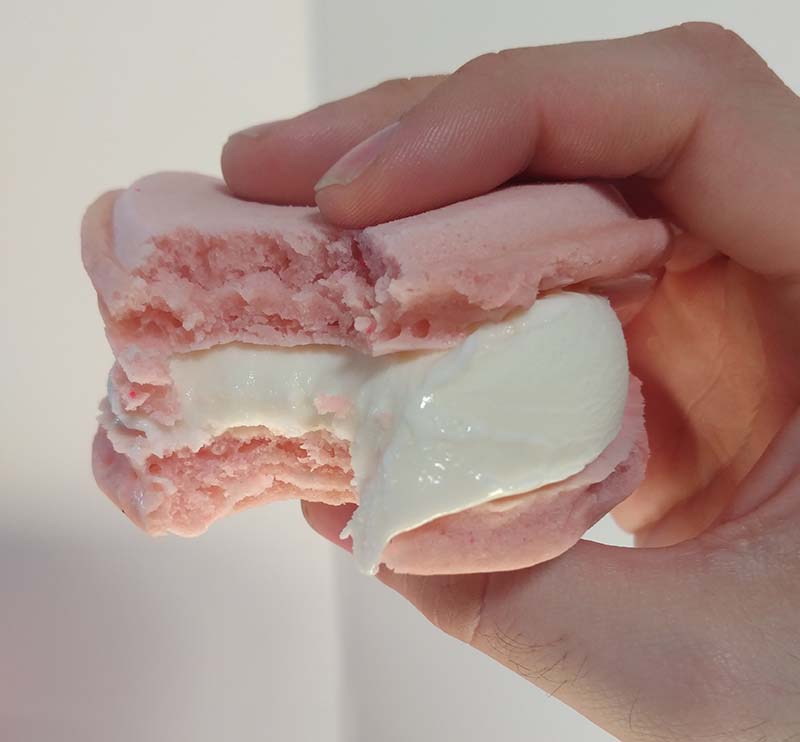 Here’s the rundown on the pink pancake ice cream sandwich. The ice cream is soft, the pancake is softer, and when you bite into it, the whole thing DIDN’T discombobulate (which is rare in non prepackaged ice cream sandwiches). The downside though, is it’s super bland. It’s your basic starchy pancake mix (without any eggs, cinnamon, or other seasoning), and vanilla ice cream. It was a delightful gesture, with the markings to be something great, but fell slightly short on taste.

After all of this amazingness, I felt super amped. The ice cream museum was everything I dreamed it’d be and more, and it truly left me wanting to scream for ice cream. 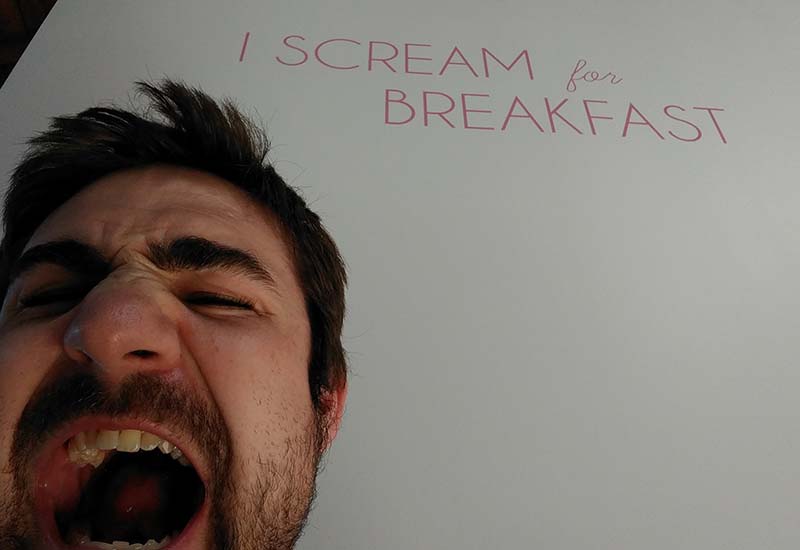 I hope you enjoyed seeing the Los Angeles Museum of Ice Cream through my eyes. If you were able to even get five percent of the joy I obtained going to this thing, then I bet this was worth the read. Feel free to read some of my ice cream reviews, and follow me on social media. 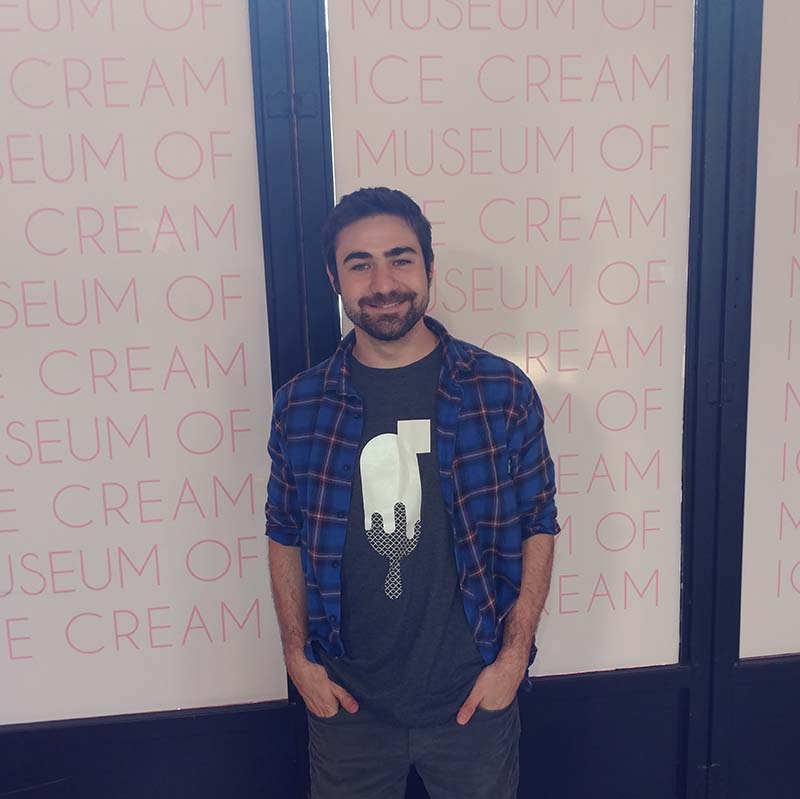