A Possibly Hairy Situation, Even for Vegans 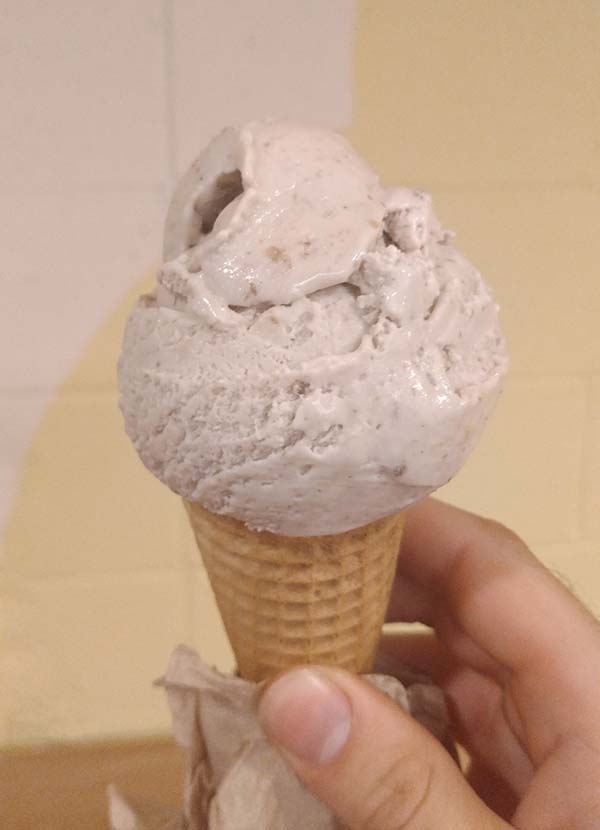 According to most people asked, Van Leeuwen is another in a long list of must try ice cream shops while in NYC. With several locations all over the city, I decided to go to Brooklyn, and see what their Williamsburg location had going on.

Before I go into the flavor, let me set the scene a little bit. It was at night, just before closing, and the ice cream at Van Leeuwen was the fourth ice cream place I’d consumed that day. I’d been walking and taking subways for miles, and was feeling a little bit like a bloated piece of shit. Looking for something light, refreshing, and something that could metaphorically carry me back to the land of the living.

So when I heard that there was a vegan banana nut here, I was all up in that business. At least, for a while…

From the first lick, my eyes were closed and I was completely entranced. Why? Well this was pretty much identical to a banana nut muffin in almost every regard. From the starchy goodness to the banana potassium blend, to the nutty protein balance- it had it all. What’s more, since this dessert was vegan friendly, it didn’t have the same feel as regular ice cream. It was lighter, airier, and something of a consistency between fluffy cake frosting and traditional ice cream. My tongue could press right into it, and shape the scoop with a single lick. I thought to myself, “Good job guys, this is one of the top vegan ice creams I’ve had so far (that wasn’t a sorbet).” Because I was a bit bloated, I think the vegan ice cream was just what I needed.

Thinking about it harder a memory came to mind. With my eyes still closed, my taste buds took me back to my first half marathon. In order to carbo-load before the run, I was chowing down on fatty costco banana nut muffins like there was no tomorrow. Each one had around 650 calories, and I probably ate two just to make sure I didn’t run out of energy during the run. So come miles four, five, and six, when I started to run burp, some of that residual muffin reentered my throat. And while many will find that taste absolutely disgusting, I actually liked it. I mean, it’s light-years better than burping up straight stomach acid bile. So with my legs still aching from all the walking during the day, this truly did take me back to my running days when I was in pretty good shape.

But then, the imagery took a turn. It was like running at mile seven, and I begin to get a second wind and pick up the pace a bit. But before I hit full stride, some long haired floosy cuts me off and begins to run right in front of me. Her hair, while mildly majestic, is wildly flapping in the wind and ends up going in my mouth. Ew!

I opened my eyes. This wasn’t a memory any more. I put my fingers in my mouth to pull out a long blond hair. Disgusting! I mean, sure, burping muffin taste is one thing, but that consistency of hair in your mouth sends shivers down my spine. Also, I tried to take a picture of it, but the photos turned out horrible. You can’t even tell I’m holding a hair.

So I bring this up to the scooper, who is sincerely apologetic and she gets me another scoop on the house. It wasn’t her hair, but there was some hair made into the batch. I politely take the new scoop, and head out the door. It pains me to say this but I ended up throwing the second scoop away. Why would you keep scooping from the same hairy batch!?!? I couldn’t take the risk of it happening again. Still bloated, there was a good chance I’d do far more than just burp the next time, and I didn’t want to ruin the pleasant taste memories I had before encountering this hair.

Long story short, it tasted like a perfect replica of a banana nut muffin minus the accidental hair found in the ice cream. I really liked it… up until that one hair. And then when I ask for a replacement, it’s scooped from the same batch instead of bringing out a new one from out back. I’ve seen instances where hair has been found in ice cream before, and what I’ve appreciated in the past, was that the entire batch was recalled, not just the one scoop.

I really want to like Van Leeuwen since they’ve made so many people happy. But I just can’t in good conscience do it right now. Maybe someday in the future I’ll be able to forgive them, but that day is not today.

Tell Me What You Think

Was I too harsh? Too soft? Just right? I am admittedly shallow and want to know what you think of this review. Send me a message on my contact page, or leave a comment below.