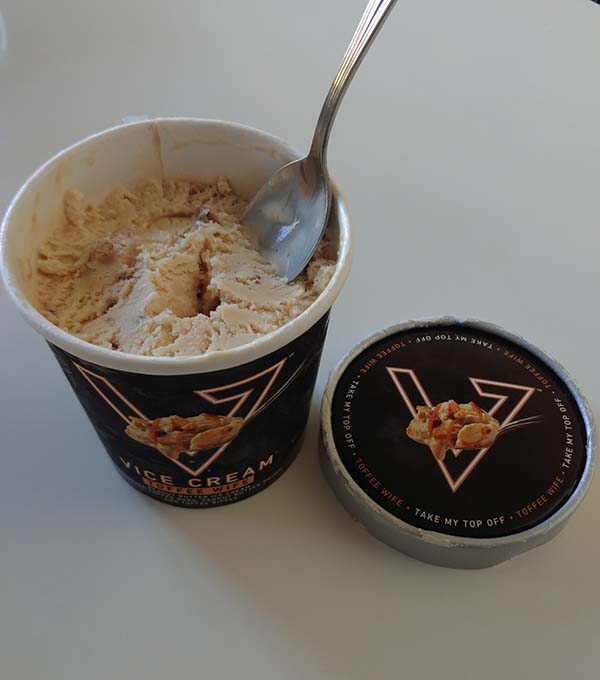 So if you missed pint 1 of the mini series, check that out here. The flavor I reviewed was Choc of Shame, and during the review I go into the power of names while discussing some pretty heavy stuff. And I’m not just talking about the depth of chocolate.

This time around however, I’ll be discussing the second flavor I was able to enjoy, the Toffee Wife. And as the saying goes, “toffee wife, toffee life.”

First off, let me say bravo on the texture here. Of all the pints, past and to come, this one was easily the softest of the bunch. I’m spooning through it like butter with a hot knife. It effortlessly bends to the will of my spoon, and then just sits gently on the tongue as it slowly melts into its creamy bliss. This is serious softness too. Like, I left this bad boy in the freezer for a week (that was my limit into how long I could wait), and it scooped just as easily the second and third time as it did the first.

In terms of the actual flavor, we’re looking at toffee bits in a peanut butter ice cream, with both toffee and peanut butter swirls. Inside my mouth it’s like there’s a game of poker going on between the peanut butter and toffee, and each side just keeps one-upping the other.

“Oh yeah? I see your peanut butter ice cream and raise you a toffee swirl.”

“Well fuck you! I’ll see your peanut bits and add in toffee bits to make this even more toffee centered!”

Regardless of how fierce the argument got, it would just go back and forth. The toffee elements had this sweet caramel/butterscotch like taste that would come in strong in the beginning. But as the flavor persists on your tongue, the peanut butter would eventually overpower it and the whole thing is peanut butter centered. Then you take another bite, and we’re back to square one with the toffee! This relentless match would continue one bite at a time, until ultimately the peanut butter has the last laugh after the final bite is taken. With peanut butter in the after taste, there was no more toffee to touch, and this epic flavor battle had come to a conclusion. Peanut butter was the victor.

On a side note, the bits of peanuts and toffee didn’t really do as much except provide little nougats to bite through. Because the toffee and peanut butter were already strong on their own, it wasn’t like there was exceptional contrast when adding in these other two elements.

I gotta say, this flavor is probably the best Vice Cream pint. It’s soft in texture, but packs a punch in flavor. The peanut butter and toffee go together in a way that’s practically peanut butter-scotch. It comes in waves of butterscotch, with the peanut butter aftertaste.

If you want to try Toffee Wife and have a toffee life, you’ll need to find out where they are located near you. Luckily, their store locator can be found here.