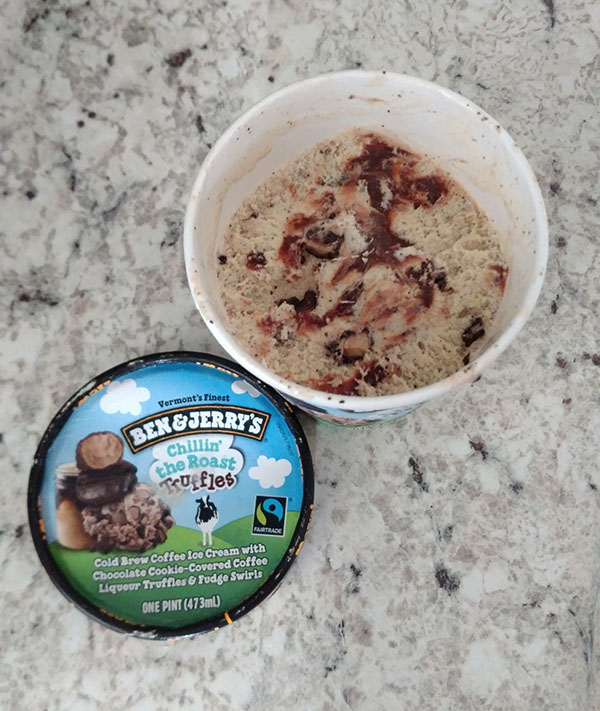 As well all know, Ben & Jerry’s has a swath of flavors that change with every year, and while some should be added to the standard line of rotating flavors, it seems as though few make the cut. We all know that Save Our Swirled was something of a limited time offer that probably only sold marginally well, but ultimately was not continued as a regularly occuring flavor. Flavors like The Tonight Dough, Karamel Sutra, and Americone Dream all started out as limited one off flavors, and through good sales and margins, have made it into

Now I plan on reviewing another new flavor, in the hopes that they will continue to keep in in production along with the classics like Chunky Monkey or Cherry Garcia. This time, Chillin’ the Roast Truffles.

Before I even get into the flavor, let me clear one thing first. They added truffles. So dammit, this is probably going to cost extra, right?

Nope! It’s Ben & Jerry’s, so of course they’ve found a way to add gobs of truffle morsels, while still making it the same affordable price point for the consumers. It’s already starting off strong and I haven’t even taken a bite.

At its core, it’s pretty much a tiramisu cake with a little extra extra coffee punch. This alone should be enough to sell it. But wait, there is more. There’s the truffles. The ingredient that people lose their shit when used. And even though confectionary truffles are completely different for the ridiculously expensive fungi found in the fanciest of dishes, the prestige and price point mildly transfers from one concept to the other.

The truffles are amazing in that they provide the part that makes it like tiramisu, the coffee liquer truffles covered in chocolate cookies. The truffles are large, but not terrible to spoon through, as the soft truffle is soft, and the cookie covering doesn’t freeze hard, but instead just acts like a small shell, protecting the truffle innard from freezing to hard in the ice cream.

On the whole, I absolutely adore this ice cream. It’s got the same Ben & Jerry creaminess and consistency that has been standardized across their many product lines, so there is no new surprise here. It’s just that this is a fun and lighter take on the Coffee Buzz Buzz or whatever other coffee flavors they push at the moment.

The whole thing is delicious. Dammit you guys, you’ve done it again. I just pray to the corporate overlords of Unilever  realize this to be a delicious flavor and will continue to produce it (pending sales are moderate to good). It’s probably the best coffee type of ice cream Ben & Jerry’s has done, and even though I’m not the biggest coffee consumer, I could see myself eating this by the pint on a daily basis.

If you want to find out if Ben & Jerry’s is offering this flavor near you, you can check for yourself by clicking the where to buy button on the Ben & Jerry’s website.