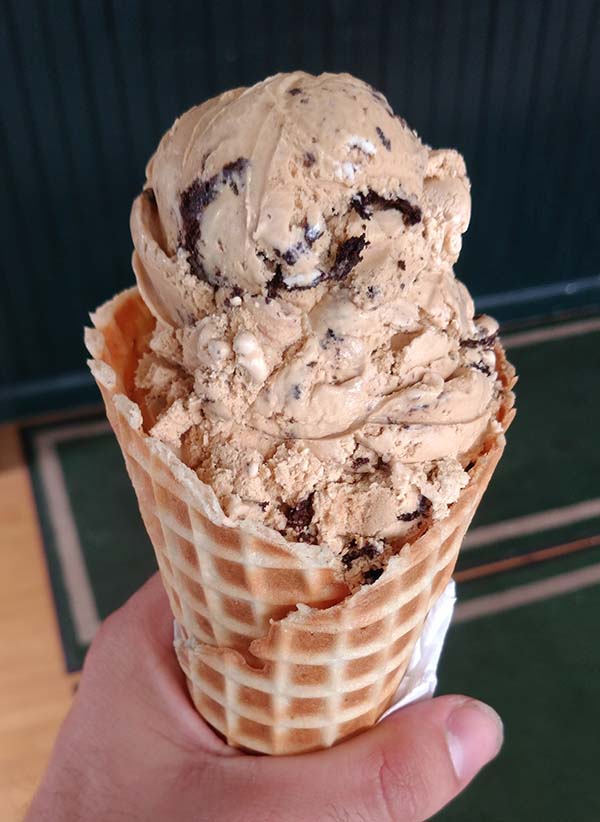 So let me set the scene for my trip to Brickley’s. It was a cold and rainy Rhode Island day, and I had slept in my rental car the night before on account that the couch I was supposed to surf on cancelled. I was tried, and slightly less than pleasant to be around at the moment. But since I knew that ice cream was coming my way for breakfast, my spirits were lifted and I put my best ice cream game face on to tackle this place.

Marching into the shop, I gallantly announcement to the scooper that I was on a mission to eat the best ice cream in every state.

*Crickets… I got no response.

They respond, “And we’re the best in Rhode Island?”

Taken aback, I begin explain but my voice slowly decrescendos until I have no idea what I’m rambling about. “Well, you see, I need to find it… and I have this thing where there’s no such thing as a single greatest flavor… and I want to know… what’s good here?”

“Oh… um, people seem to like our pineapple orange, because it’s pretty unusual… And then our Coffee Oreo is probably our best seller. Do those qualify as the best?”

Looking to finish this conversation quickly, I announce I want a single of their Coffee Oreo.

If we’re being completely honest, I wasn’t sure what to expect. After all, the ice cream in Wyoming blew me away. Rhode Island may be the smallest state in the country, but since it’s so close to the ice cream giants in Massachusetts, that’s bound to count for something, right? Then again, even the staff didn’t seem enthused- either about life or ice cream for that matter. Maybe that’s just who they are, or it’s some sort of old fashioned New England humbleness?

Well whatever, onto the Coffee Oreo!

First off, look at the size of that thing! This was a single?! Perhaps their lack of enthusiasm was a actions of a New England humble person after all.

Then I get into the ice cream, and at first bite, the whole thing is…. underwhelming. My mind does a complete 180 and I begin to understand the scooper’s confusion. The coffee is like a standard instant coffee with loads of cream. There’s no real bitterness. There’s no real energizing quality to it. There isn’t even a worry that this will send me to the bathroom in a hour. This is a mocha almond fudge, but without almonds and replace fudge with Oreo’s. How in the world could someone rate this place as the best in the state, and how is this the most popular flavor they have?

I begin to become a little downtrodden in my critique and analysis of the ice cream, but then an innocent smile unconsciously spreads across my face. It took me a second to realize what was happening. It’s almost like I was… feeling. Feeling something that my conscious mind was unaware of. But why? I know that this isn’t special. I know that this isn’t game changing in any way. I know that I’ve had many a coffee ice creams pretty similar to this. So why does this ice cream move me emotionally?

It’s the softness. The ice cream here is softer and more airy than some of the thick and heavy New England counterparts. The Oreo chunks are practically brownie bits, and it’s in no way obtrusive to the ice cream eating experience. The whole thing is just… nice. Like a hug from a friend. Often times they won’t be the most life changing experience of your life, but they are always welcome when they come. I was having kind of a bleh morning (sleeping in a rental car + rain), but this soft mocha-coffee fudge-oreo was exactly what I needed to start my day. All in all, even if it’s not spectacular, I admit I like it the way it is.

I’ll flat out say it, the best in Rhode Island? I don’t think so. Is it decent? Sure. Above Average? Perhaps, but let’s not go overboard. It’s still your traditional coffee flavor, and it’s your bread and butter Oreo cookie mixed in. The texture feels nice though, as it differs from a lot of the thick and heavy ice creams in the North East. The sizing is great though, and in terms of price to taste to quantity ratio, it does it’s job really pretty well.

If you want to come here for yourself to see how wrong I am, their address is located at 322 Main St, Wakefield, RI 02879.

Get in Touch With the King

If you want to reach out with opportunities, ice cream recommendations, or just to shoot the shit, send me a message on my contact page. I would be happy to hear from you and hear your thoughts- whatever they are!