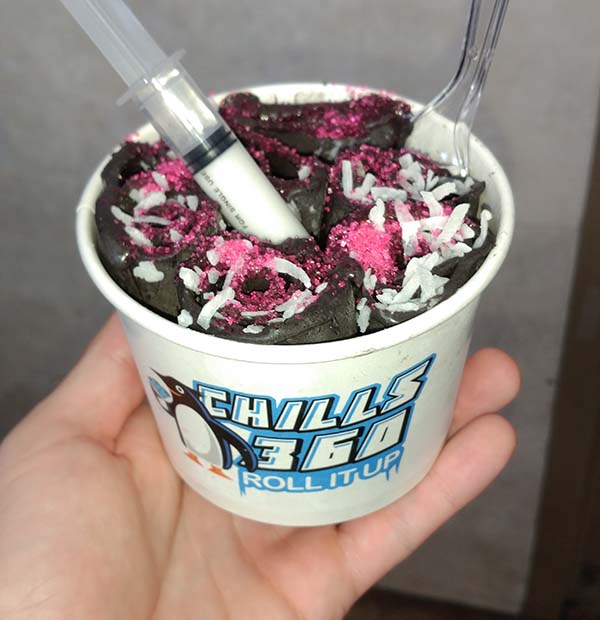 Chills 360 is Dallas’ rendition of the ice cream craze that has been sweeping the nation in recent years- rolled ice cream.

For those who might not be as familiar with the trend, the basic concept is this. They take cream and whatever ingredients make up the base, and poor it on top of the ice pan that looks something like a miniature wok at Ghengis Kahn or some other Mongolian BBQ restaurant. The cream/ingredients are mixed, mashed, and matted down on the pan, turning it from a liquid into the creamy solid we’ve come to expect from most ice creams. Only it’s not done here. Then, the workers take this paint scraper like cooking utensil, and pry the ice cream from the pan, whilst pushing forward. It creates these ice cream rolls and after delicately placing them in their cup, the final toppings, garnishes, and sprinkles are added to complete the creation. It’s pretty nifty, with the only two downsides being:

Moving on to the actual flavor, let’s break this thing down. It’s a coconut base ice cream, with some charcoal, sharpie, or squid ink thrown in to make it black. Take some more coconut shavings and throw that in, perhaps along with a little pink sugar, because why the hell not? Finally finish it with a syringe of condensed milk to garnish the whole thing, and voila.

I’m gonna be real for a sec. The pink sprinkles were a terrible choice. You have this beautiful black and white motif going with black ice cream, and white toppings/sauces when usually it’s the other way around (vanilla with chocolate syrup and/or chocolate jimmies). The pink is just so out of place, I hate it. Furthermore, the sprinkles are honestly kind of grainy and take away from the awesome texture of the creation in general. It’s like when you have a perfectly waxed and buffed floor, and then someone forgets to wipe their shoes before coming in, and drags sand all over the floor. It’s an utter shame is what it is.

Secondly, the additional set of coconut shavings was rather unnecessary in my opinion. It may have added an extra texture profile, but at what cost. I feel like there was a decent chance of a flavor balance occurring between the sweetness from the condensed milk, and the sweet nutty base of the coconuts. With the shavings added as a garnish, it drowned out any chance of flavor cooperation. It ended up pretty much as coconut on coconut with a slight hint of an external sweetness.

To which I’ll reply,”Perhaps it may sound like that, but I will say there are several rolled ice cream places that have blown me away, and believe me, we’ll get to those later.”

But to extend an olive branch to the fans and defenders of Chills 360, here are the positives that they managed to accomplish with this ice cream:

So what does all of this mean?

Truthfully, I’m not 100% sure. As far as taste goes, it has a strong coconut taste. So be prepared. I personally would like the flavor profile to be a little bit more complex with a stronger condensed milk presence, as that was actually a really good idea. As far as texture goes, I am a hater of the sprinkles, as it takes away from its actual quality creaminess. It sure does look cool though.

Would I recommend this to a person who’s going to Chills 360? Only if you are looking for a more unique rolled ice cream shot to add to your social media. Otherwise, I might recommend one of their other flavors.

Try it and tell me what you think!

This was a fairly interesting flavor, and if you’ve tried it and disagree with my assessment, feel free to let me know! Send me a message on my contact page, and tell me exactly how my analysis is incorrect, and I’ll take your words under consideration for future reference. I look forward to your critique!