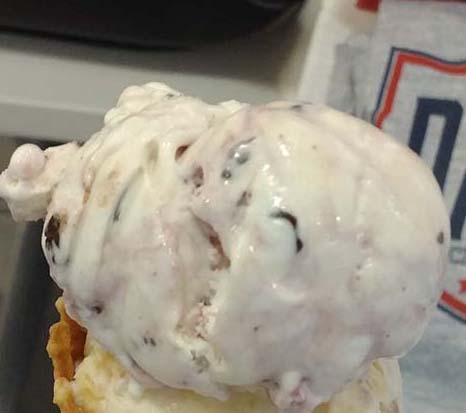 I’ve been talking a fair amount about the ice creams in Ithaca and near Cornell University. But I haven’t noted the ice cream from Cornell- until now. Cornell has one of the best dairy masters programs in the country and a part of this program of course includes their awesome ice creamery and dairy bar.

Upon visiting their store front, I was happy to try two of their more unique flavors- Bavarian Fudge and Freedom of Peach. But seeing as how both flavors were unique in their own right and not much for mixing, I thought it’d be best to review them separately as opposed to together.

We’re looking at a fancy raspberry chocolate, but in reality it’s so much more than that.

If I had to describe the theme of this flavor in two words, it’d be, “Fudgin’ paradox.” It’s so many things but at the same time isn’t. The ice cream’s consistency is practically a gelato, but isn’t gelato. There is a strong fudge taste, but it’s super light with the raspberry accent. It says Bavarian, but the addition and development of raspberry is totally North East American. It’s chocolate, but looks purple! All of these things feel like they’d go against one another but at the same time are happening cohesively and in a united fashion. It’s kind of a beautiful thing to witness.

One paradox I’d like to expand on this the strong/light part of it’s taste. Normally chocolate and raspberry together are two strong flavors. Raspberry usually has to come on pretty strong in order to compete with the chocolate so it doesn’t fall into the background. In fact, the more fudge that is consumed, the stronger the chocolate taste- pushing raspberry away until it vanishes to the back of the palate. But somehow this isn’t the case here. With each bite, I get a small dose of raspberry, light and smooth like a cream saver, and a strong bump of chocolate that somehow isn’t getting in the way of the raspberry. And then the flavor goes away. It feels like the ride of flavor ran its course, and then left without becoming one of those guests who stay too long after a party has ended. And then I take another bite and restart the ride all over again. It’s shocking to find a flavor with such a clean finish- especially when chocolate is involved. It’s this next level efficiency in tasting that leads to understand exactly what part of this ice cream is from Bavaria, Germany.

The entire thing was amazing. Smooth and creamy raspberry with a baked fudge accent. Neither are overpowering, and there’s this clean satisfaction that occurs after each bite as no lingering after taste accumulates. Overall, it tastes like something that shouldn’t be, but is, and for that, I thank them.

If you want to go to the Cornell Dairy Bar yourself, the address is located at: 411 Tower Rd, Ithaca, NY 14853

Read My Other Cornell Review

If you want to hear about another flavor from Cornell Dairy Bar, I would recommend the Freedom of Peach Flavor. It should be out in a day or two, so hang tight until then!