The Second of Two Cornell Flavors 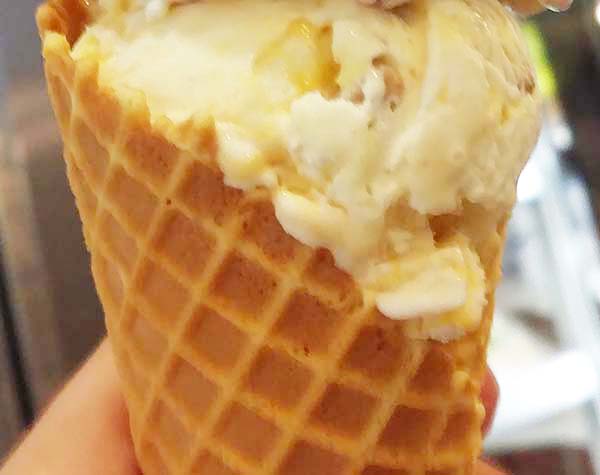 If you didn’t catch part one where I go over the properties of Bavarian Fudge, you can read that experience here. If you’re thinking, “well fudge fudge” (because you don’t like to swear in your mind?), then I guess you can just continue reading on for the peach. So Cornell has one of the best dairy masters programs in the country and a part of this program of course includes their awesome ice creamery and dairy bar.

Wow. There’s a lot of freedom going on here, and more than most people realize. Because not only does the peaches remind me of 1950’s America, but its creation story is practically the embodiment of meritocracy and the American dream. You see, this flavor was invented by a student. And the fact that a program that has been around since 1880 allows the best from the new generation to leave their mark is pretty damn inspiring. With the best new flavors rising to the top, it just feels like the American dream in ice cream form. A flavor just pulling itself up by the bootstraps, its touching as fuck.

Going back to the flavor now, the peach is strong, but not blindingly intense. There’s a good mix of cream to mellow out the peachy citrus and it just tastes like the filling of a peach pie. To compare it to a west coast staple, McConnells, I’d say it is in no way inferior to their own peach cobbler ice cream. Say What!? Yes, it is that good. To put it another way, if ice cream was a part of our constitution, this flavor would have to be amended onto it first.

So why is it good? It just provides a great ripe peach taste that is equal parts sweet and delightful, with just a single subtle note of sour. That note? E flat (for those wondering, E flat is the note the liberty bell makes- #Murica).

At this point, some might be asking when I’ll stop sucking the dick of Cornell’s freedom dick. To which I’ll say, fair enough. Let me talk about the downsides for this flavor.

First off, and this is more about the business and less about the flavor, but the waffle cones are about 1/3 the price of the actual scoop. It’s not worth it in terms of price to taste to quantity.

Secondly, in terms of aesthetics, I’m not gonna lie, it’s a little hard to look at. At first glance, I totally thought there was melted butter on this. It looks like the popcorn jelly belly, and for a moment, I was afraid this view would sour my perception of the flavor. Silver lining though? This wasn’t the case at all. The peach shined through, and it’s refreshing perception breaking taste reminded me of something… freedom.

Despite looking like it’s been drenched in movie theater popcorn butter, the flavor has the skills to pay the bills, and make it way into the regular rotation of Cornell University’s ice cream flavors. The peach isn’t too intense, it gives off a pie filling like taste, and it is comparable to some of the great peach cobbler ice creams of the West Coast. Basically, I dig it, and recommend trying it if they have it in the rotation while you’re there.

If you want to go to the Cornell Dairy Bar yourself, the address is located at: 411 Tower Rd, Ithaca, NY 14853

Tell Me Your Freedom Jokes!

If you didn’t notice, I had a pretty fun time writing about the freeing flavor of this ice cream. That said, there were probably another half dozen freedom jokes I decided to take out because they either ruined the flow, or just seemed to beat the dead horse. That said, if there were some other freedom puns you’d wish I would have added in this post, let me know! You can either leave a comment below, or, if you are unsure about your jokes, send me a message on my contact page. I look forward to hearing your freedom funnies soon.