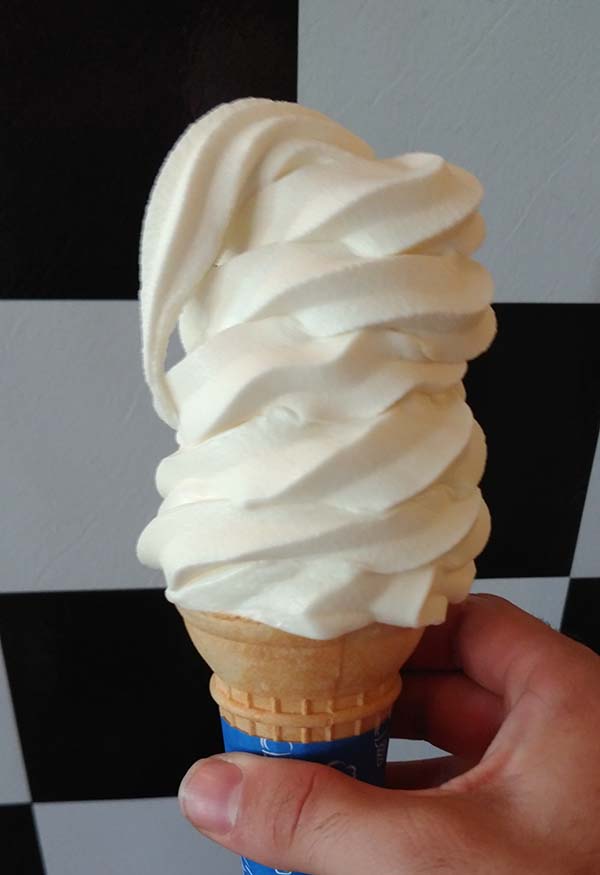 As I may have noted earlier, Creemees are a standard staple for Vermont. But did you know that they can also be found in Western Massachusetts? Well in Turner Falls, MA, there’s another Creemee shop that I was told I had to visit. It was in the home town of a work colleague, and seeing as how I’ve had hour long conversations about ice cream with this gentleman, I guessed that I could trust his judgement. So after wandering the town this man grew up in, I decided to go to his favorite ice cream spot, and judge the shit out of them. And I’m only semi-kidding here.

The flavor I got- Maple.

It’s a maple ice cream, and for the dedicated followers of my writings, you might notice I had already had a maple creemee before. So why did I feel the need to try another maple flavored creemee?

First off, for the two dedicated fans who noticed that, thank you.

Now the answer is two-fold.

So I went with the maple creemee knowing full well it probably wouldn’t be as good as the creemee I had in Vermont…. and I was right.

Like I said at the beginning, I’m here to judge the shit out of them, and in turn my work colleague. But if we’re being completely honest, the maple here was barely even maple. It’s not like the foresty sugar dancing on my mouth as joyous melodies give me a rush beyond anything I’ve noticed. No. This maple was closer to that Aunt Jemima nonsense. The fake high fructose corn syrup stuff that flows like molasses. It’s not refreshing, the sappiness is off-putting, and it just feels… bleh. It’s a stark contrast from the light pine sweetness that was tried in Vermont, and while it does provide an ample amount of sugar, it’s just a different quality of sugar. And this does make a difference.

Despite my harsh face value flavor analysis, there is something that makes this creemee taste better; the price. Knowing that I paid less than $3 for all of this?!? Oh yeah, suddenly the syrup is just a wonderfully joyous celebration of sugar and the products that resemble it. Is it still the high fructose corn syrup it was before? Sure. But now it contains a little more joy knowing that I didn’t have to break the bank to try this creemee creation. Once I realized this, I immediately felt the need to reevaluate my thoughts on this creemee and maybe give them a second chance.

Suddenly, I begin to understand why my coworker loves this place so. When looking through the lens of nostalgia, flavors taste better. Not to mention, I’m sure that as a kid, any opportunity to consume more ice cream made the flavor go up 10X in his mind. And with that simple note of empathy, I too began to get a fraction of the joy that I’m sure my coworker experienced every time he came here.

It was alright. I might have seemed like I hated it during the flavor profile section, but in reality it was still edible. It’s just not as good as the creemees in Vermont that use real maple syrup. Also, because it’s got a pretty great price to quantity ratio, this helped boost the flavor profile and overall enjoyment experience. This is one of those places you’d love to take your kids after a soccer game, but once they get older, you hope they graduate onto more sophisticated things.

If you want to taste the comparison and try the mediocre after trying the best, you can find the Country Creemee at 52 Avenue A, Turners Falls, MA 01376.